Thirty-two youth hunters, a dozen squirrel dogs and their handlers, and about a dozen WRD volunteers showed up at Dawson Forest WMA on a frosty December 18 for a treeing-feist squirrel hunt.

The kids were paired with some of the best treeing feists in north Georgia and the dog’s handler for the morning hunt. At noon, the hunters returned to the check station for lunch, which included a pot of squirrel & dumplings cooked up by WRD personnel. Drawings were held for hunting related items — including a Red Bone coon hound pup, won by Kristian Kelly. “Only a few squirrels were killed, but the kids had a ball,” said Dawson Forest WMA area manager William Thacker. Nearly three dozen kids under 16 showed up for the squirrel hunt with treeing feists. 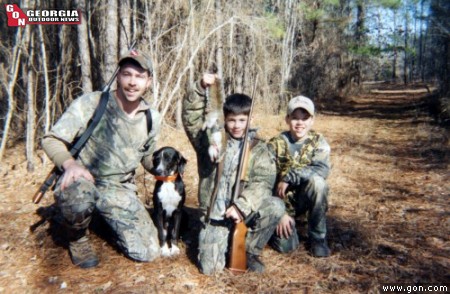