Winder man dies of rattlesnake bite while hunting with his grandson.

Winder hunter Richard B. Rupert, 68, died Oct. 10 after being bit on his calf by a rattlesnake, according to Oglethorpe County Deputy Coroner Howard Sanders.

Rupert, his son and his 12-year-old grandson were hunting a tract of land near Thaxton Wynne Road in Lexington. Upon arriving at their hunting property just before daylight, the son entered a tree stand and Rupert took his grandson on to make sure he got set up in his stand safely, Sanders said.

“Once (Rupert) turned away from the tree stand, he said, ‘Ouch,’ and he told his grandson ‘I think I’ve been snake-bit,’” Sanders said. “His grandson looked down from his tree stand and could hear the rattlesnake rattling. He saw the snake crawl off, at which time he came out of the stand.”

Rupert and his grandson then ran down a trail to where they had parked their 4-wheelers, Sanders said.

“It was exactly the opposite of what they should have done,” Sanders said. “That just made his heart beat 10 times faster, and that made the venom move faster through his system, too.”

Once they got to the 4-wheelers, Rupert got on a 4-wheeler but collapsed before he could begin driving.

The grandson then managed to get Rupert onto the back of the 4-wheeler and drove to where Rupert’s son was hunting, Sanders said.

The grandson alerted his father, and “then they were able to get (Rupert) to the closest house and call 911,” Sanders said.

Oglethorpe County Ambulance Service arrived approximately 15 minutes later. When the ambulance arrived, the family was performing CPR on the victim, who was in full cardiac arrest.

Rupert was then transported to Wills Memorial Hospital in Washington where he was pronounced dead on arrival, Sanders said.

The official cause of death is listed as “cardiac arrest due to snakebite,” Sanders said. 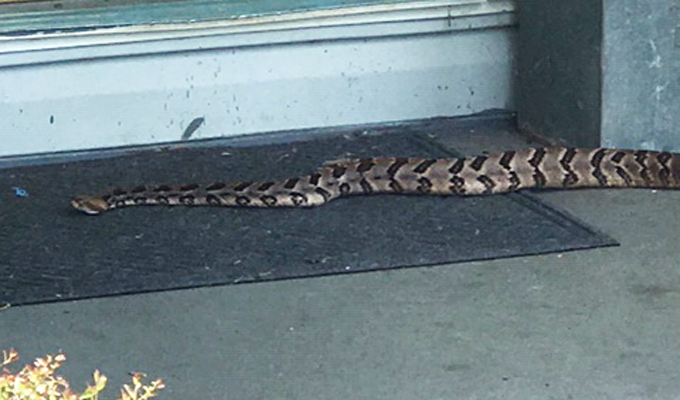