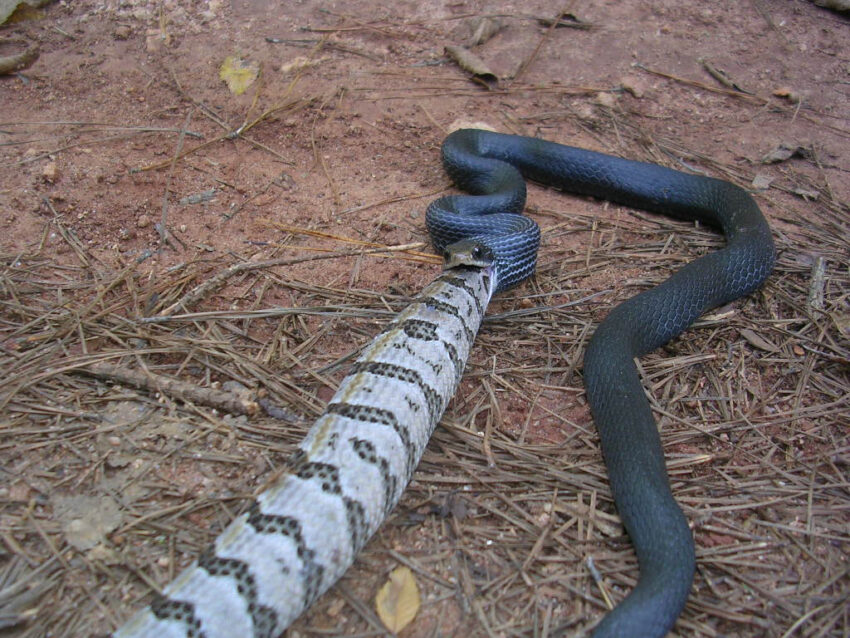 On September 28, 2006, Jody Hawk of Monroe was doing some deer scouting on his hunting lease in Morgan County. He said it was a windy day, so instead of trying to bowhunt he felt like his time would be better spent scouting.

“I was driving down a logging road when I came upon these two snakes,” said Jody. “A black racer was eating a timber rattler. The black racer probably had the rattlesnake halfway down. Luckily, I had a camera with me, so I jumped out and started taking pictures.”

Jody said the timber rattler looked to be about 2 1/2-feet long, and the black racer was in the 4-foot range.

“I’ve waited my whole life to see that,” said Jody. Jody was enjoying being able to photograph real-live nature in action. However, the black racer didn’t appear to be photogenic for very long. The black racer quickly began to regurgitate the rattler.

“It probably took two or three minutes before the racer spit out the rattlesnake,” said Jody. “When he spit him out, he took off.”

Jody was amazed at what he just witnessed, but what happened next was even more impressive to him.

“Now get this; the rattler laid there for a few minutes, and I thought that it was dead,” said Jody. “All of a sudden it coils up and starts rattling at me. I finished him off with a rake that I had laying in the back of the truck.

“That’s the first I’ve heard of a racer eating a rattlesnake.” John Jensen, Senior Wildlife Biologist for WRD’ s Nongame  Section said black racers will eat about anything they can overpower and consume.

“They do eat a lot of lizards and smaller snakes, mice, frogs, larger insects, like grasshoppers,” said John.

Other species of Georgia snakes that eat snakes include the king, Indigo, coral, coachwhip and cotton- mouth snakes.

Jody said he is thankful to have rattlesnake eaters on his club.

“It was pretty neat,” said Jody. “Some people say the only good snake is a dead snake. Folks, don’t kill non-venomous snakes.”