Coyote On The Prowl: What do you think this Paulding County coyote was up to at 9:36 a.m. on June 3, which happens to be the peak timing for fawns being born in that area? Larry White, of Dallas, sent the trail-cam image. When Is That Pierce County Rut? Let’s go out on a limb and say this picture of a Pierce County spotted fawn in the snow is a once-in-lifetime shot. First of all, Pierce County doesn’t get snow that often, and certainly not when fawns still have spots. GON subscriber Buddy Tuten, of Waycross, got the picture on his farm on Jan. 3. Fawns lose their spots about four months after being born, and fawns are born about 6 1/2 months after a doe is bred. That means this fawn was born in September, and it’s mother was in heat in March. Don’t Think That’s Enough Distance, Young Fellow: Bet the young buck will only have to learn this lesson one time. Andy Bishop, a GON subscriber from Valdosta, got this trail-cam photo in Taylor County on Nov. 26 at 6:01 a.m. The Elusive “Coon Buck” Makes An Appearance: Coons and deer are common feeder companions, but a buck’s head appearing to be connected to a coon’s body? Robert Campbell, a GON subscriber from Hawkinsville, got the well-timed pic on Nov. 13 in Dodge County. “Can’t You Wait Until We’re Not Right In Front Of The Camera?” Eliot Marbutt, a GON subscriber from Palmetto, got this trail-cam photo in Fulton County on June 17 last summer. Now That’s Some Bull… Neil Hewitt, of Milledgeville, said he’s gotten lots of wildlife on his cameras before, but never beef. “This bull showed up on Oct. 23. Showed up again during a hunt Nov. 10 and interrupted a nice buck encounter. No cows close by, so not real sure where he came from.” 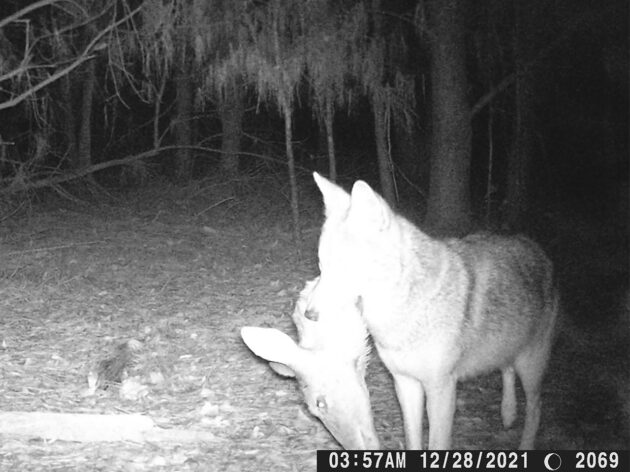