Officer Christopher Arby Upton, 37, of Monroe, was on patrol at about 11 p.m. when Norman Clinton Hale, 40, of McDonough, mistook the officer for a coyote and shot him in the head, killing him instantly.

Steven Ruppert, special agent in charge for the Southern Region of the U.S. Forest Service, said Upton’s presence in the woods at 11 p.m. was routine.

“As for our officers being out and about after hours, that is typical,” he said. “That’s when we want our officers to be out there.”

Capt. Barry Fincher, with DNR Law Enforcement, said there had been complaints in the area.

“Upton was working an ongoing complaint down at the horse park,” said Fincher. “It’s a tragic situation all around. It’s tragic foremost for the family, and also for us as conservation officers and for the community and hunters. We need to identify our targets.”

Capt. Fincher said the rifle was mounted with a sophisticated scope with both night vision and infrared imaging.

“Apparently he was convinced he was looking at a coyote’s eye,” Fincher said. “And once you pull the trigger, there are no timeouts.”

The hunters called 911 to report the incident shortly after the shooting.

The use of such scopes is legal for hunting coyotes in Georgia, as well as on national-forest land, but the area where Hale and a friend, Clifford Allen McGouirk, 41, of Jackson, were hunting may have been off limits to hunting.

Apparently there is some confusion among Forest Service personnel as to the size of the area that is off limits to hunting at the Ocmulgee Bluff Equestrian Area. District Ranger Erin Bronk said the area around the more than 25 miles of trail system at the equestrian area has been open to hunting in the past. She said the Forest Service goes by WRD rules concerning hunting around developed areas. She could not give an acreage of the developed area at Ocmulgee Bluff. She said it consists of a trailhead with a parking lot, restroom facilities and a sign board.

DNR’s regulation prohibits discharge of a weapon within 50 yards of a public road, said DNR Law Enforcement Assistant Chief Homer Bryson. He would not provide details in an ongoing investigation, but he did say the equestrian area is a designated no-hunting safety zone.

No charges have been filed against Hale or McGouirk pending the investigation, which is being conducted jointly by Forest Service Law Enforcement, DNR Law Enforcement and the FBI.

“Once we gather all the evidence, we’ll lay it out in front of the U.S. Attorney’s Office and the local D.A,” said Lt. Col. Bryson. “We’ll decide which way we’re going and what we’re going to do from there.”

Bryson said investigators are waiting on reports from the autopsy as well as reports on testing of the weapon before going public with results of the investigation.

A memorial service was held for Officer Upton in Athens on March 13. It was attended by hundreds of law-enforcement officers and forest-service employees, according to a report in the Athens Banner Herald.

“This is a tragic incident where the loss of a federal officer’s life could have been avoided,” said Ruppert. “This is a devastating loss for Chris’ family, our agency, other law-enforcement officers and his friends and neighbors in Monroe.”

Upton is survived by his wife, Jessica, and a 4-year-old daughter, Annabelle. 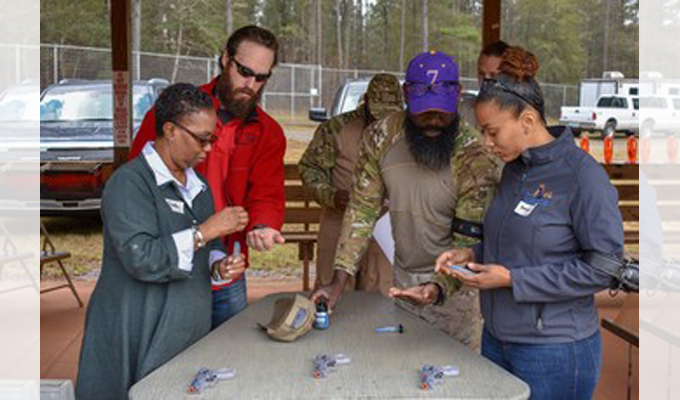