A Soperton coon hunter is bit by a canebreak rattler after dark—by a snake laying 5 feet off the ground.

The hounds were sounding half-hearted in their attempts at treeing a coon, so Glenn Cauley of Soperton, decided to catch them and move to another location. As his snakeproof boots swished through the underbrush on a hot night in September, Glenn’s mind was a world away from the horror of rattlesnake bite. But only a few yards away — and 5 feet off the ground — a rattler lay. And within seconds, Glenn Cauley would be in the midst of a race for his life.

Glenn and his brother, William were hunting September 30 in Montgomery County with two other men from Dublin who had come along to hear the dogs run.

“My brother and I were just running our dogs,” said Glenn. “We never shoot coons, even during the season. In fact, we have feeders out for them year ‘round. We just love to hear the dogs run and tree.”

Also along was Glenn’s father, Preston, and William’s young son Will, who were both waiting back at the truck a quarter-mile away.

On this night, there wasn’t much of a race going on—at least not yet.

“The dogs hit an old track and worked their way around a pond about a hundred yards from a fence,” said Glenn. “All four of us had crossed the fence to go to them, and when I decided to catch the dogs, I came back over the same fence. It was pretty high where we had gone across the first time, so I looked about 15 feet down and saw a little lower place to cross. There was a limb laying across the fence there, and as I went to move it out of the way, something popped my hand.”

Glenn’s inital thought from the sharp pain was that he had been stung by a hornet or wasp. But as he glanced down under the beam of his coon-hunting light, he noticed blood dripping from the spot just under the knuckle of the index finger of his right hand. And that’s when he knew he had been hit by a snake.

“With the blood flowing, I knew it wasn’t a sting,” Glenn said. “As I was looking down at my hand, I noticed the snake laying on my boot. It had fallen off the limb, but I didn’t even know he was there. I kicked him off and he moved back to the fence.

“I didn’t really get excited right then, knowing that I needed to keep my adrenaline down and get to a hospital. I told my brother I had been snakebit, and he came over and killed it with a limb. The other two guys caught the dogs and William brought the snake out.”

Evidently, the rattler had been lying on the limb all along, and had been pretty shaken up by the hunters’ earlier crossing. It was only a 2-footer, and didn’t get a real good shot at Glenn. But it managed to do plenty of damage.

While the bite from a bigger rattlesnake is more serious because the volume of venom injected is greater, the bite of a smaller snake is still extremely dangerous.

“I found out later that only one fang had gone into my hand and the other one left what looked like a briar scratch,” said Glenn. “But if it hadn’t bled, I probably would have thought it was just a sting and would have gone on and not paid enough attention to it. I got lucky there.”

But the ordeal was just beginning. Throughout it all, Glenn’s level-headed thinking made things much easier than they could have been.

“The truck was about a quarter-mile away, and I knew I didn’t need to walk that far if I could help it,” he said. “We were lucky that daddy heard us hollering to bring the truck around, and he did. From there, I decided to go to the hospital in Dublin because that’s where my doctor was and it was only 50 miles from Macon. If things got really bad, that’s where I figured I would need to be.”

Glenn had looked at his watch when the bite occurred, and saw that it was exactly 10:00 p.m. The next hour was a long one. Glenn Cauley of Soperton with a prize coon hound. Glenn has recovered completely from his nighttime ordeal with the rattlesnake.

“We first went by my wife’s folks’ house, but nobody was home, so we came on to Soperton,” Glenn recalls. “It was 10:35 when we got to Green Higgs’ house.”

Green runs an ambulance service, as well as a funeral home, but Glenn was hoping he would need only the former.

“Glenn asked me if I thought he could go on to the hospital or if he needed me to take him,” Green said. “I took one look and noticed there were red streaks running up and down his face, neck and shoulders. We got him in the ambulance quick.”

Up until this time, Glenn had not been in a lot of pain or unduly frightened. But that began to change.

“About 10 or 15 minutes after being bitten, the hand still wasn’t bothering me much. I could feel it swelling some, but it wasn’t really hurting. But after we had gotten to Green’s, it really swelled up and started burning. I also had a real funny feeling and a funny taste in my mouth. That really got to me.”

William Cauley had killed the snake and placed it in a bag to take to the hospital for identification purposes.

With his brother in the ambulance, William went by to pick up Glenn’s wife and the two headed up Interstate 16 toward Dublin in a hurry, only to get pulled over by a Laurens County sheriff’s deputy.

At first, the deputy didn’t buy the snakebite story, but when Mrs. Cauley offered the rattlesnake as proof, he quickly said, “Have a good night,” and allowed the two to proceed.

Green had Glenn in the emergency room at Dublin’s Fairview Park Hospital at 11:00 p.m., exactly one hour after he had been bitten.

“The first question they asked was if I was 100 percent sure that it was a rattlesnake that bit me,” Glenn said. “I’ve seen and killed a lot of snakes, and was sure it was, so they administered the antivenin. I probably got sicker from that than I did the bite!”

Dublin’s Dr. William Moses, one of Glenn’s doctors, explained that this is the rule, not the exception.

“The antivenin is a horse serum, and any time you introduce anything into the human body that is foreign to it, the body is going to react,” Dr. Moses said. “There are severe allergic reactions to the serum that can be really bad, but you always have at least some acceptance problems.”

“Within minutes, I had a rash all over my body and my hand swelled so big I thought it was going to bust,” Glenn recalled. “My face swelled really bad, too, and the only time I got really upset was when they gave me a shot they said would make my heart race and I heard a nurse comment she hoped I didn’t have a seizure. Well, I was hoping I wasn’t about to have one, too, and fortunately I didn’t. A couple of shots of Benadryl took care of the rash, and things started getting better from there.”

Glenn was moved into intensive care around 2:30 a.m. Sunday, to a room later Sunday morning, then went home the next day.

“I had one day later in the week when my body ached all over, but that was about it,” he said. “Now you can’t even tell it ever happened.”

He hasn’t coon hunted again since the incident, but only because he’s been too busy catching up on his duties as an insurance agent.

“It was just a freak accident that I got bit,” he said. “You wear snake boots for protection, but you never think about getting bit five feet off the ground.

“I’ll go hunting again as soon as I can. But if I get a briar scratch across the neck or arm, I might just run over somebody. I’m still just a little gun-shy!” 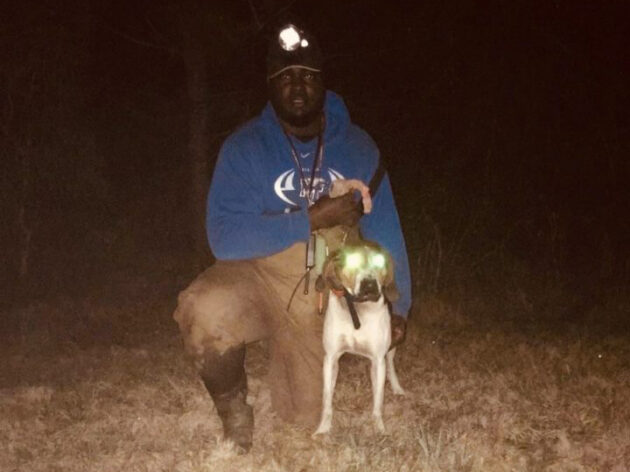