Adventures in the outdoors can bring families together and create lifelong memories. While success isn’t a requirement for that magic, it can sure add some special sauce to the recipe. The Teston family from Augusta will not soon forget the morning they spent on a cypress and lily pad choked lake in Jenkins County hunting Georgia alligators.

Kevin Teston said the tag holders for this hunt were his wife Berkeley and his daughter Kacky. They were hunting in Zone 9, where only 80 applicants drew a gator tag.

“I first got a tag in 2015 and loved it,” Kevin said, “so every year I started putting in for myself, my wife and daughter.”

Joining the Teston family for the hunt were two of Kevin’s friends from Swainsboro, Joe Jackson and Sam Goodin. The Georgia season opened at sunset on Friday, Aug. 20.

“We met at 6:30 that first morning looking for a particular gator,” Kevin said. “We started out with all five of us in a wide-bottom jonboat. After the gator we were after gave us the slip, we found one that looked good and got it hooked, but it broke off. We had fishing rods and big treble hooks and 150-lb. braided line. It’s a shallow pond, so we could follow the bubbles. Then Joe saw the broken line and reached down and got it, and with no pressure on the line we were able to follow it to the gator and got him hooked again. Kacky fought it into some lily pads, and we were able to get a harpoon in it. It was 8-feet, 8-inches, a perfect alligator for Kacky,” Kevin said.

Many alligator hunters go after the biggest gator they can find. That’s not always the best idea, particularly if a primary goal is to turn that alligator hide into something special. Kacky’s 8-foot alligator was perfect for what she had in mind. As a Georgia Bulldog fan, she is getting some red gator-skin boots made that she can wear to the Georgia-Florida game. 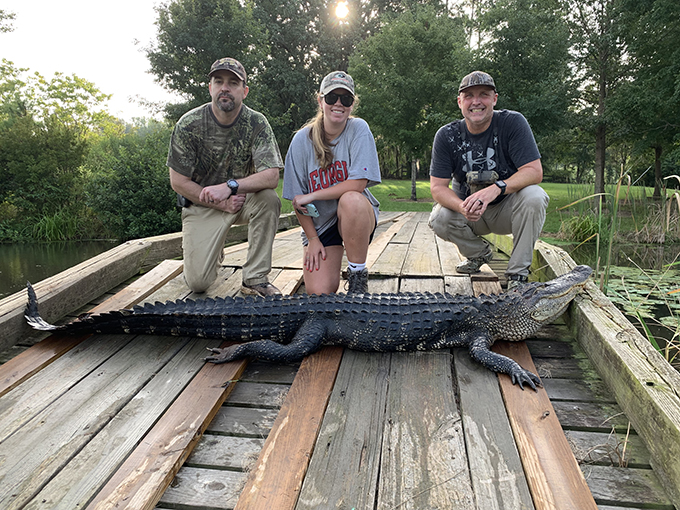 Kacky Teston with her alligator that is now at the processor where the hide is being tanned. Kacky, a UGA fan, plans to have red gator-skin boots made to wear to the Georgia-Florida game.

Kacky had her gator by 8 a.m., and with another tag in the boat, they put her alligator in the shade and decided to look for another one.

“I looked up and said, ‘Berkeley, there’s your gator.’ It was the one we scouted. Of course it went under. When it came back up, we went that way, and it went down again. But this time we could tell from the bubbles that it went straight down, so we got hooked up. Berkeley was fighting it from the fishing seat in front of the boat, and it’s taking us all over the place. At one point, Sam said, ‘You’re running the motor too fast.’ Joe said, ‘That’s not the motor, that’s the gator.’ The gator came out of the water twice just 8 feet from the boat in the pads—got 3 feet of its body out of water. My wife was freaking out. It finally got us hung up in some stumps and logs, and we got another hook into it. After breaking a harpoon on it, we finally got another harpoon on it.”

Berkeley’s alligator was a beast, measuring 10-feet, 9-inches, and it weighed more than 400 pounds. Berkeley Teston with her 10-foot, 9-inch alligator taken from a Jenkins County lake.

Kevin added a tip for Georgia alligator hunters. “Most people don’t know what to do with a gator. A great resource is at Old River Road Taxidermy in Bloomingdale. Harold Porterfield guides down around Savannah, and he knows exactly how to take care of a hide and the meat,” Kevin said.