"Out There Outdoors" With Clae Mathis

My wife, Taylor, killed her first buck in 2013 soon after our first son Charlie was born. Last year in December she was able to take an awesome buck that we had named “Ghost,” but that is a different story. This story is about a buck named “Hank.”

The story of Hank begins with only a few trail-camera pictures over the last couple of years. This is a buck that we knew was around, but he had never really been regular for us. He mostly gave us a few pictures toward the end of the season each year. I was able to tag out on bucks on Nov. 3, which meant the rest of the season was about the three remaining buck tags in our household—two for Taylor, and one for our son Charlie. Hank gave us our first clear pictures on Nov. 4. Taylor had been pretty much over hunting for a little while, probably mainly because I had been going so much trying to get my second buck. It wasn’t until a Saturday night with friends that all that changed. Hank had become somewhat regular by this time, and we were going out to eat with four of our best friends for one of their birthdays. We were going to Natalia’s in Macon, which if any of you know what kind of place that is, you would know quickly it is not the type of place I frequent. Anyway, on the way there we were talking about hunting as usual, and I showed everyone in the car the really good picture of Hank that I had gotten. Taylor saw the picture and said, “Well, I want him.”

That is when we decided she would chase Hank. We planned on going to try to hunt him the next day since he had been daylighting the past two days. While sitting in Sunday School, I was reminded that I had a deacon’s meeting that day at 4 p.m. That meant no hunting that day. To make matters worse, at 4:25 my phone alerts me of a Moultrie Mobile image. Of course, as I sit in the meeting, Hank is in the food plot eating. He ate for the next hour while I helplessly watched from my phone. When I got home, Taylor and I decided we would try him the next day after work. I was so excited the entire next day. I had a great feeling that we would get a chance at him that evening. We both got home from work, dropped the boys off with my parents, and headed to the stand. We had no idea what was in store for us that evening.

We got in the stand and got set up around 4. We had the camera on a tripod and the gun on a Final Rest tripod. The windows in our Fatboy Blind slide, and we usually expect the deer to be in the food plot in front of us, making for an easy shot. This hunt would definitely not be an easy one. After getting set up, it was time to do the intro for our YouTube episode that would come from this hunt. At 4:19 I was doing our intro video when Taylor says, “There’s a deer.” Sure enough Hank was walking the exact opposite way we expected or needed him to. We tried to move things around to get Taylor on him, but we were not able to. The reason that this threw us for such a loop is because Hank was going back the way the bucks would usually only go in the middle of the night. I pride myself on thinking that I know exactly what these deer will do each day, but we all know that in the middle of November, you can throw all patterns out the window. We spent the entire next hour looking behind us. We were trying to see where in the world he went, I was terrified that he was going to cross the highway. As we sat, some does trickled in and out of the food plot. Before all was said and done, about 15 deer wound up eating in front of us.

About 5:30 we look out into the field to our left, which is normally not a spot that we would even need to check because that’s where the highway is. We saw a big-bodied deer and immediately knew it was a mature buck. One look through the binoculars would let us know that it was Hank. He had walked a big circle all the way around us. The area that he went in is one of my “stay-away” areas since the deer bed there. Hank was obviously checking and freshening up scrapes; but either way, he was walking a big circle all the way around us. I was worried that he was never going to make it to the food plot for an easy shot before dark. We were losing light quickly, in fact, the video lighting was pretty bad. We wound up moving to the opposite window that we moved to earlier to try to get Taylor on him for a shot. He never did stop walking long enough for us to get a shot out of that window. In the midst of trying to move over and get both tripods moved over to get her on him, my chair broke and threw me in the floor. All of that noise with a mature buck plus 15 or so other deer made for a nerve-racking experience. Somehow, Hank was not deterred from all of the noise I was making. We lost sight of him for an agonizing minute or so before he showed up about 120 yards from us. He was walking straight to our food plot. After all of the moving tripods around, changing windows, breaking chairs, and arguing with each other, we were going to get a chance for Taylor to shoot him right in front of us like we planned all along. Hank walks to the spot where we have shot many bucks over the past few years. He was around 90 yards from us and stopped broadside. At some point during the whole process, I got my eyes on the wrong buck. She shot and saw Hank mule-kick and run off, but I saw the big-body buck run 10 yards and stop. I thought she had missed and that we had a second chance. I had to beg and plead with her to shoot him again because I was confident that she had missed and he had run toward us. She knew that she had hit him, so this made for an incredibly wild 15 seconds. I won her over, though, and she shot and dropped the buck with the second shot. The celebration began for me, but she was angry and annoyed with me because of the insane way I had acted. What can I say? Big bucks make me go crazy.

After we settled down, we got down to go find what I thought was Hank. It didn’t take me long to find him, but in what became one of the lowest points of my life, I had to look at my wife and tell her that this wasn’t Hank. We were both so upset, and we just stood in silence for about two minutes. Then, a lightbulb went off in my head that made me ask her, “What if you didn’t miss him with the first shot?” We walked over to where she said Hank was actually standing, since I had no idea. We walked over and could see where the ground was kicked up pretty good, and even though we couldn’t find blood, it didn’t take long to look in the pines to see the white belly of Hank. I walked up by myself to make sure this was him before I told her to come because I am not sure I would have survived if they both had been the wrong buck. I figure I could’ve got a pretty good head start running away from her if she stayed back a little!

Anyway, it was Hank and we had a great time sitting around him and appreciating him. Most of all, we thanked God for blessing us the way He has when it comes to deer hunting together. That night we got Hank and the other buck that we named “Hank Jr.” loaded in the truck. We got home and had some friends and family stop by to see them as we cleaned and caped them out. It was an awesome night when all was said and done. Taylor Mathis with “Hank,” her 2022 buck from Taylor County.

There are a lot of lessons in this one for me. Sometimes, we have to slow down because what we think is the right thing is not always what we think. Sometimes we think that we know better than God what is best for us and for our lives, but He can see clearly the right way and wants us to follow Him. Also, sometimes we can see the right thing to do, but we let outside circumstances or influence keep us from doing it. In this situation I thought I knew that she shot and missed the correct buck. I was POSITIVE that she had shot Hank on the follow-up shot. On the other side, she was POSITIVE that she had shot the correct buck, but she still shot the follow-up buck because my outside influence made her doubt what she already knew.

God won’t lead us in the wrong direction ever, so we just need to trust Him and follow Him even if our circumstances tell us to do otherwise. This hunt didn’t turn out the way I had planned at all, but we were together in the outdoors and still made an incredible memory that I know neither of us will ever forget. The insanity of this hunt is live on our channel, and even though the lighting wasn’t the best, the story is still great. Thank you and God bless!

Out There Outdoors With Clae Mathis

Clae Mathis is a new blogger for GON.com. Clae is a full-time teacher and high school baseball coach with an absolute obsession with whitetail deer hunting. His outings often include his wife Taylor and two sons, Charlie and Cal. Clae loves the Lord and his family first, but deer hunting falls in right after those. Clae’s YouTube Channel is mostly devoted to deer hunting in Taylor County, but it also contains other types of hunting. Every single hunt he and his family go on is well documented on the channel, Out There Outdoors. 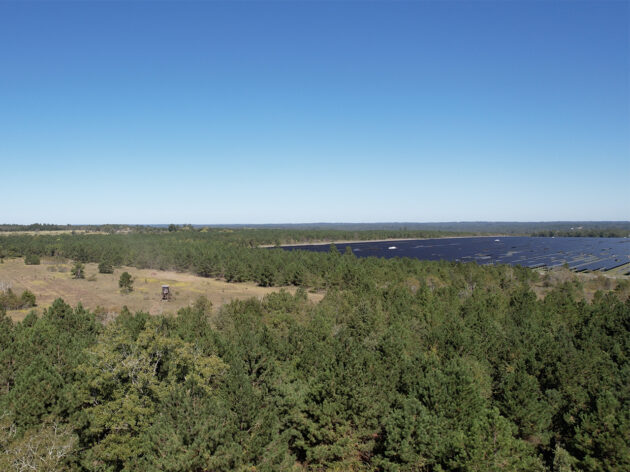 Between The Solar Panels And The Pine Trees 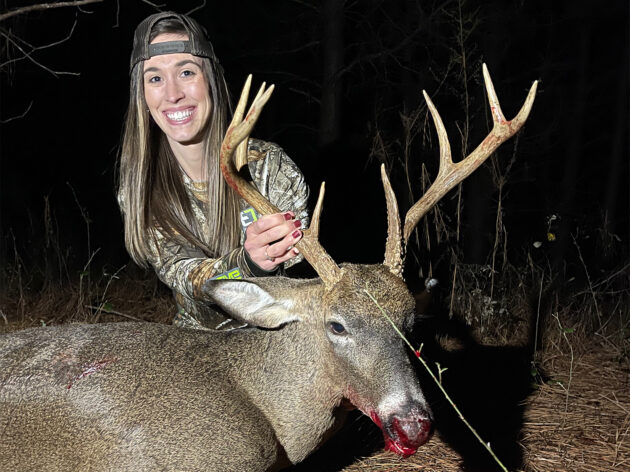