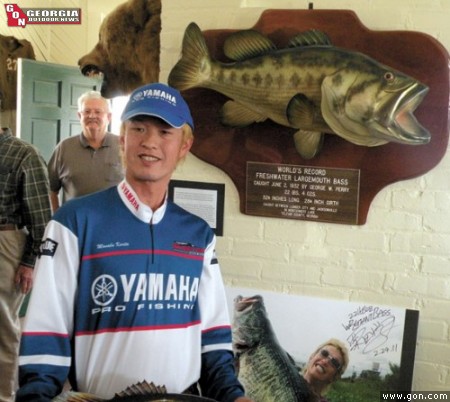 The Telfair Museum of History, which owns a replica of the world-record largemouth bass caught a few miles away in 1932, was given an autographed poster of Manabu Kurita holding his 2009 fish that tied the record set in Georgia by George W. Perry.

“In Japan, for me, it isn’t much different at all,” the 34-year-old auto service worker said through an interpreter during a recent visit to Georgia. “But the changes are much more significant here.”

Manabu stunned the sportfishing world in July 2009 when he landed a monster largemouth from Japan’s 259-square-mile Lake Biwa.

Six months later, the 22-lb., 4-oz. fish was certified as a tie with the world-record bass landed by George W. Perry in Telfair County in 1932.

Manabu landed his monster fish using an 8-inch bluegill. Had he been using artificial lures that are the backbone of the bass-fishing culture in the U.S., the fish may have been even more famous, he said.

Manabu also landed a spot on the Yamaha/Skeeter Pro Staff and a promotional trip to the Bassmaster Classic in New Orleans last month, which led to a side trip to Georgia to visit Montgomery Lake, where the “other” world-record largemouth was landed.

The Georgia visit was arranged by world-record bass historian and author Bill Baab, a retired Augusta Chronicle outdoors writer and author of a book on George Perry, available at <www.whitefishpress.com>.

“After learning that Manabu Kurita was to attend the Bassmaster Classic in New Orleans in February, I thought it would be a great opportunity for him to make a side trip to Georgia,” said Bill, who enlisted help from Yamaha rep Martin Peters, along with the McRae Rotary Club and others who helped coordinate the historic visit. This is the only known photo of the 22-lb., 4-oz. world-record largemouth bass landed by George W. Perry in Telfair County on June 2, 1932. The identity of the man holding the fish, however, remains a mystery. Bill Baab, author of “Remembering George W. Perry,” believes the photo was taken near the post office in the town of Helena, Ga., and that the “smoking man” in the image may be Jack Page, who accompanied Perry on a fishing trip that day to Montgomery Lake.

Before hiking out to Montgomery Lake, which today is part of the Department of Natural Resources’ Horse Creek Wildlife Management Area, Manabu visited the town of Helena, where the Perry bass was first weighed that day in 1932.

“I am extremely happy to visit this place and community,” he told a crowd at the Telfair Museum of History, where a mounted replica of the Perry bass is now accompanied by an autographed photo of its new co-star.

“I am also honored to have my photo displayed in the same place.”

Perry, who died in a 1974 plane crash, would have been pleased that his record was tied after 77 years, said his son, George “Dazy” Perry, who joined the group.

“My father would be 99 years old if he was still here,” George told Manabu. “But he would be very, very happy for you.”

Both record fish had nearly identical weights, but that’s where the similarities end.

Perry, a young farmer at the time, landed the Georgia bass on a Creek Chub Fintail Shiner — a new lure of that era. He later cleaned and ate the fish.

The Japanese fish, of course, was mounted.

Perhaps the most striking contrast involves the lakes where the fish were caught. Lake Biwa, almost 350 feet deep in places, is millions of years old and is the largest lake in Japan, created by earthquakes that accompanied the formation of Mount Fuji. The largemouth is an introduced species, categorized by Japanese authorities as an invasive species. Here in Georgia, almost 7,000 miles away, Montgomery Lake is little more than a muddy slough — the silted-in remnants of an oxbow off the Ocmulgee River that continues to flow just a few yards away.

Studded with cypress knees and shaded by Spanish moss, it is narrow enough to cast completely across. To all the visitors, it was obvious that Montgomery Lake is unlikely to produce another world-record bass.

Lake Biwa, according to Kurita, is a different story.

His next big fish, he said, will be larger than either of the co-records and will likely be caught with lures, and not live bait.

“There will be a bigger fish,” he said. “The only issue involved — is time.”