Snakes are on the move this time of year and can be hiding anywhere. Seeing one rattlesnake is enough to get your blood pumping. Imagine finding not just one, but five rattlesnakes at one time. That’s just what one man did Memorial Day weekend.

Chris Swilling was leaving his family cabin in Bucktown, just outside of Ellijay in Gilmer County, on Monday June 1 around lunch. Approximately 100 yards from their cabin, Chris spotted his neighbor’s bush hog roughly 6 yards off the road atop a bank. Separated by a barbed wire fence, he quickly noticed the large snake coiled up.

"I always carry my Ruger SP101, so I stopped the truck, hopped out, and fired," said Chris. “After I shot, I immediately noticed another snake pulling back under the bushog."

He approached the bush hog and waited for the second to try and escape, it did, and Chris fired. He could still see the first one he fired at slowly moving under the bush hog. Needing to raise it up, Chris fished for a large ratchet strap and pulled it through the barbed wire, to the mowing deck, and back to his front tow hooks of his truck.

After some maneuvering, he was able to lift the mower. He reloaded his gun and returned closer to examine the situation.

"I did not expect there to be any more but soon noticed three others were hiding near the rear of the deck," Chris said.

He fired 3 shots to those, and one more each to the two larger ones.

After carefully checking his surroundings, he returned back to his truck and begin spreading the news of his exciting story. Chris killed another rattlesnake in the same area a few years back, and it was still in his freezer waiting to be mounted. He gathered it plus the five he had just killed and took them to his taxidermist, where they will be used as show mounts.

Chris said his neighbor was shocked to hear of so many being found in one place at one time, but he was glad to know the snakes were found and taken care of before he was ready to use the bush hog. 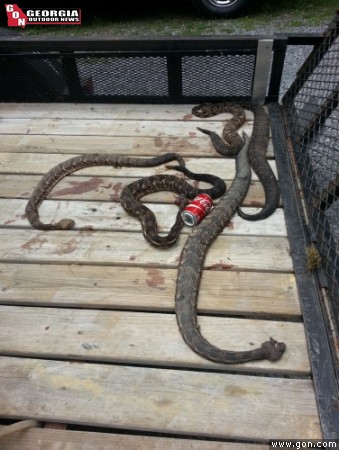