Almost a quarter century ago, Roger Snipes caught a 46-lb. Lake Lanier striped bass that became one of the longest-standing, most sought-after lake records in Georgia. Imagine the hours of striper fishing that have been put in at Lanier since Roger’s catch. This photo at the marina soon after the catch shows off the striper’s amazing 31 1/2-inch girth.

“We had been striper fishing most of the day, pulling herring, and hadn’t done any good,” Gary said.

They were fishing near the mouth of Bald Ridge on the main lake, and Gary said the striper fishing had been really tough on the south end of Lanier.

“We noticed a lot of action along the bank, and I said, ‘Let’s put some plastic on and go through there and see if we can get a couple of bass.’ We started fishing little points and pockets. The wind had picked up a little bit out of the south and was blowing in there pretty good. It had been calm all morning.”

After several tries, Ward was able to cast his worm up under and overhanging cedar tree right on the bank where they had seen some activity, and that’s when the fish hit. Ward’s line headed quickly for the main lake.

“Right in there, two boat lengths off the bank, I’m in 25 feet of water, but that thing was 3 feet off the bank and in 6 feet of water,” Gary said. “I saw the line run off behind the boat, and we saw the flash of the fish one time. Ward said, ‘I think I have a good one.’ And that fish kept going and going and going. I had the trolling motor on high, and I’m guessing it had 200 yards of line out.

“There was a bass boat coming up the lake, and I swear it ran over that line out there between us and the fish. That’s when I pulled the trolling motor up and turned the big motor on. I told Ward to keep the rod bowed and pressure on the fish and to start getting some line in. “After that initial run, it was pretty much done. We were over 90 feet of water, and it was a smooth bottom with no trees,” Gary said. “I reached down to get my bass net out of the rod locker and got the boat positioned. It came up once, then it went down about 30 feet and started coming up again. I said, ‘Ward, we have a problem. I don’t thing it’s going to fit in the net.’ I got maybe half of it in the net. I was scared to death because it was a net my wife’s grandfather had made 40 years ago. I got my arm under the net to support it and lifted him up in the boat,” Gary said.

The striper was weighed on certified scales at Hammond’s Fishing Center, and it was later verified by Nick Jamison of WRD Fisheries.

Ward’s record striper had an amazing 31 1/2-inch girth and was 45 inches long. Next to his record striper, Ward holds his spinning outfit with 8-lb. test line and the chartreuse-pepper lizard the striper hit. 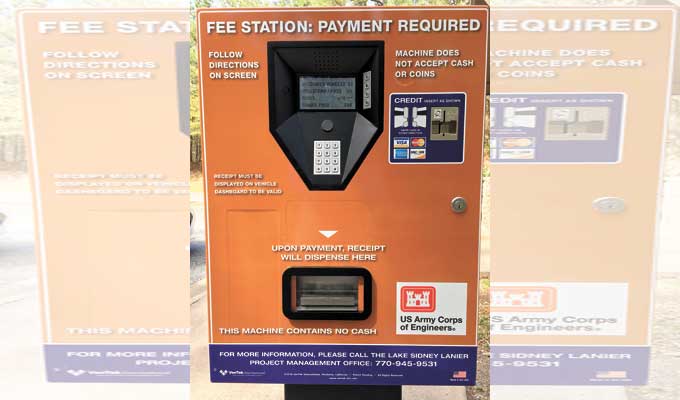