Lyme disease and an allergy to red meat are just two tick-borne illnesses of concern for sportsmen.

It’s bad enough to have blood-sucking arachnids attaching to your nether-regions. But we now know ticks are more than just a disgusting nuisance — they can transmit illnesses that dramatically transform a person’s life.

On an April evening in 2011, Jason Power, of Winder, discovered a tick attached to his leg. Jason had found ticks before—he hunts and fishes—so he didn’t give this tick a second thought.

“I pulled it off my leg, but this time the bite place just wouldn’t go away. It left a place that was really red, and the spot where it had bitten me got really hard.”

That tick bite changed Jason’s life. His story is one sportsmen need to hear, especially now as turkey hunters are in the woods and many people are outdoors when ticks are most common.

Several weeks after finding the tick, Jason finished eating a hamburger when something hit him “like a ton of bricks.” The Alpha Gal red meat allergy is caused from a bite by the Lone Star tick. Adult female pictured on left, and adult male on right.

“I broke out in hives, and then I started having trouble breathing,” he said. “I knew I was having an allergic reaction to something, and I was going into anaphylactic shock. They called an ambulance and rushed me to the hospital. At the hospital they gave me some shots, and I came around, but they kept me overnight. They told me to make an appointment with a doctor immediately.”

Jason got a break several days later when he got an appointment with Dr. Dean Firschein, of Allergy Partners of Georgia, in Athens.

“He ran a few allergy tests, and then he came in to talk to me,” Jason remembers. “He asked me if I had been bitten by a tick lately. I said, ‘Well, actually I have.’ He asked if the place where it had bitten me had got real red and hard.

“It was like he was there reading my mind.”

Blood tests confirmed Jason had developed an allergy called Alpha Gal from the tick bite. Unlike Lyme Disease and Rocky Mountain Spotted Fever, which are diseases associated with tick bites, Alpha Gal is a virus.

University of Virginia doctor Thomas Platts-Mills, who himself has the Alpha Gal allergy, is the doctor who discovered the virus along with a colleague. The two doctors believe an organism in the tick’s saliva may make a Lone Star tick bite victim allergic. When Jason learned what that meant, he was devastated.

“Man, I’m a guy who loves my barbecue and hamburgers,” Jason said. “Going three years without a hamburger has about killed me.” Curtis Self is a victim of the Alpha Gal allergy. “I had a bacon cheeseburger at a steakhouse,” said Curtis. “I woke up around 3 a.m. with severe stomach pains, nausea and stomach problems, and I noticed my hands and feet were itching severely. I actually drew blood on my hands from scratching them so much. I noticed that my throat was starting to close up and luckily thought to take a Benadryl.”

The most famous victim of Alpha Gal is best-selling novelist John Grisham. He has written about his 12-year ordeal of trying to find out why he suddenly became allergic to red meat. Eventually, doctors diagnosed his allergy to be Alpha Gal.

The allergy is so severe that Alpha Gal victims can have severe reactions just by touching red meat such as cleaning a deer or putting a burger on the grill for family members. More bad news is that Alpha Gal is becoming more common.

Dr. Firschein says anyone who ventures outside is a threat to be bitten by the Lone Star tick, the only tick that can spread the virus to humans. An Alpha Gal attack may occur days or weeks after ingesting or coming into contact with red meat, he said. There is no cure for the Alpha Gal allergy, but the doctor says there is evidence some victims can outgrow the allergy after time.

Jason said his Alpha Gal allergy is getting better.

“At first I couldn’t even eat dairy products and butter, but I can have that now I had blood work done, and my levels had dropped from 3.0 three years ago to 0.9 now. I’m still considered to have the allergy, but maybe there’s a light at the end of tunnel.”

In Georgia and the Southeast, Rocky Mountain Spotted Fever (RMSF) is transmitted primarily by the American dog tick. RMSF is still the most important tick-borne disease in the Southeast—because it can kill you. According to UGA Cooperative Extension, Rocky Mountain Spotted Fever has a fatality rate of 3 to 5 percent, with two-thirds of the cases occurring in children under the age of 15. This disease is characterized by a sudden onset of chills, fever, headache and bloodshot eyes.

The name “spotted fever” refers to a rash that appears two to four days after the onset of fever. The rash usually starts on the hands and feet as small, flat, pink spots that do not itch. The rash gradually spreads to most of the body. Rocky Mountain Spotted Fever can be easily misdiagnosed as measles. Proper diagnosis is aided when doctors know of a recent tick bite, and RMSF is confirmed by a blood test. Antibiotics provide effective treatment.

Lyme disease was first recognized in Georgia in 1987. While cases occur all over the state, the largest numbers occur in the northern half of the state. The black-legged tick is the primary vector, especially in the nymphal stage. Its small 1/16-inch size probably contributes to the failure to detect the nymph while feeding, according to UGA Cooperative Extension. Lyme disease is transmitted by the bite of an infected black-legged tick, also known as a “deer tick.”

The initial sign of Lyme disease infection is a ring-like swollen rash known as erythema migrans that appears at the site of the tick bite within three to 22 days. The rash usually has a bright red outer ring with a lighter center ring. The rash is frequently accompanied by joint pain and flu-like symptoms (fever, headache, stiff neck, muscle pain and sometimes nausea).

While the rash is very helpful for diagnosis, it does not develop in all cases. If you develop flu-like symptoms, joint pain or a rash a few days to a month after a tick bite, consult your physician for a diagnosis. A blood test taken three to six weeks after symptoms develop can help confirm the disease. If a blood test is taken too soon for antibodies to develop, the test may show a false negative. While it is desirable to begin antibiotic treatment soon after symptoms develop, this manner of treatment can also produce a false negative. Lyme disease is easily treated in the early stages with antibiotics. If delayed, treatment can be more difficult.

The later stages of Lyme disease can begin weeks or even years after being bitten by an infected tick and can be very serious. This stage of the disease can be easily misdiagnosed because it mimics a variety of cardiovascular, arthritic and neurological diseases. Joint pain can be severe, with permanent destruction of bone and cartilage of the joints if left untreated. No deaths have been reported due to initial infection, but complications may affect the life span of some individuals. Personal protection, early diagnosis and quick treatment are your best defense against Lyme disease.

There are two different concerns when dealing with the prevention of ticks. One is keeping the ticks off your skin. To protect your skin while outdoors, use a repellent containing DEET. This repellent works best when applied directly to your skin.

The other concern is keeping ticks off of you before they get to your skin. To protect your clothing while outdoors, you must use a repellent containing Permethrin. Permethrin should not be used directly on your skin. The ideal way of protecting your clothing is to spray them the day before you plan to go hunting. A good technique is to turn your pants inside-out and spray the inside of them with DEET. After they dry, turn them regular side out and spray the outside with Permethrin. Let them dry until the morning. Also spray your socks, boots and your hunting shirt and coat with Permethrin. Turkey hunters should spray their turkey vests, particularly the cushion seats.

Even if you use repellents, check yourself thoroughly for ticks. Or, as Brad Paisley sings about in his 2007 release—get some help from your significant other.

Ticks common in Georgia and the Southeast (from left): black-legged tick or deer tick, Lone Star tick and the American dog tick. 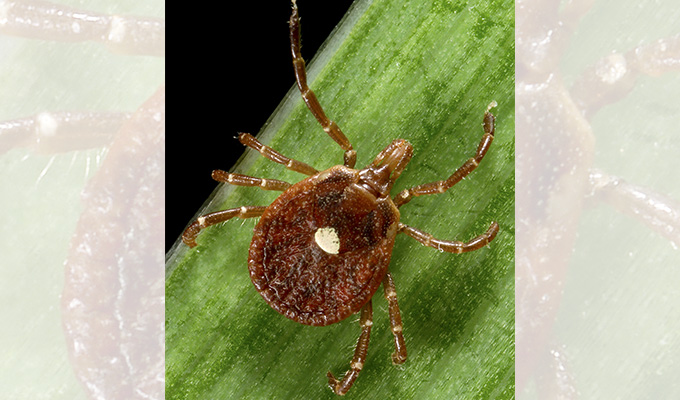 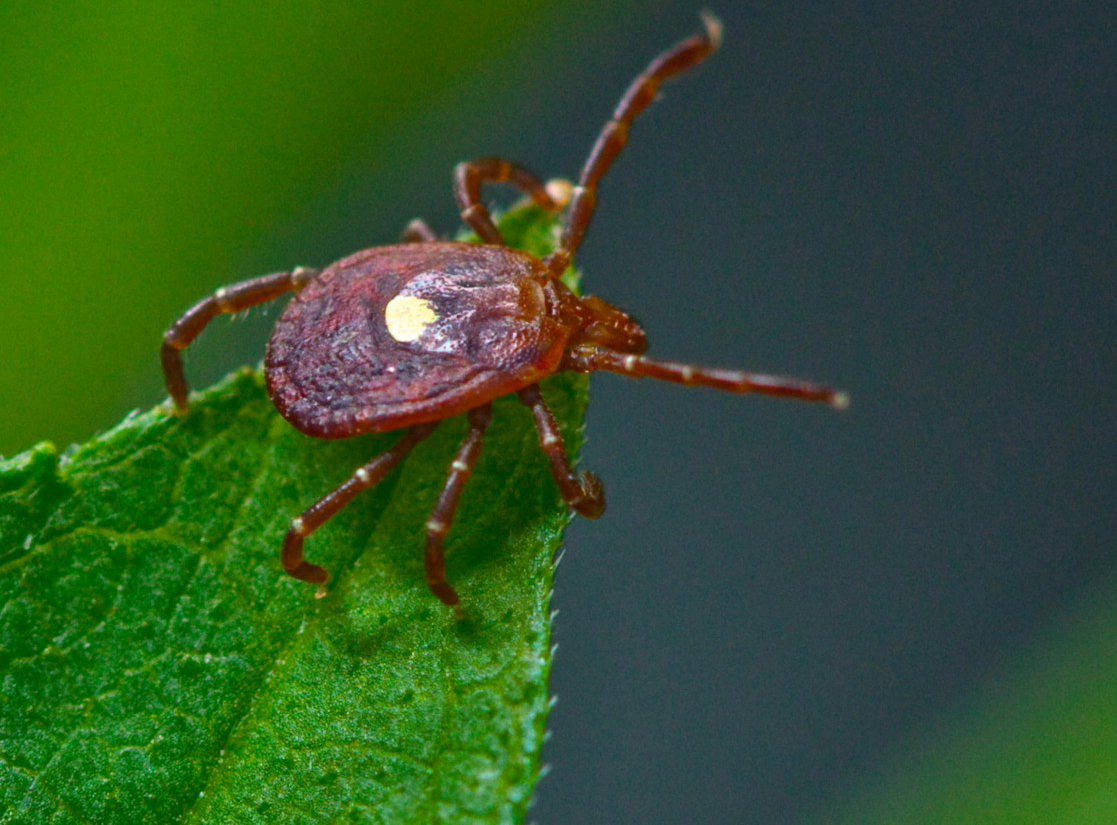