Randy hadn’t even got situated in his stand yet when his 13-year-old son Hunter Crumpler shot. Randy, from Townsend, headed 75 yards away to learn that Hunter had shot at a big bear. This all happened Saturday, November 12 on a Dixon Memorial WMA bear/deer hunt.

After a quick search Hunter discovered the big male bear dead near the edge of a gas line. It would later weigh 437 pounds at the check station. “My job hasn’t allowed me to take him hunting as much,” said Randy. “He’s killed some small game, but this is his first big game animal.”

Randy and three grown men were able to roll the bear to the truck, and eventually get it in the truck bed.

“We’ve been told it may go Boone & Crockett,” said Randy. “The head is huge.”

Randy said they will have it scored after the 60-day drying period.

“It was a real good bear,” said Ken Martin, area manager for Dixon Memorial. “As far as we can find out, it’s the second-biggest bear killed on Dixon. We had one taken several years ago that went 493.”

“There were a lot of hunters over there,” said Ken. “It was like holding hands over there.”

Dixon Memorial is in Ware and Brantley counties. For the November 10-12 hunt, 296 hunters killed four bears and 32 deer. Hunter Crumpler (right), 13, of Townsend killed this 437-lb. bear on a Dixon Memorial WMA deer/bear hunt on Nov. 12. His father Randy was with him on the hunt. 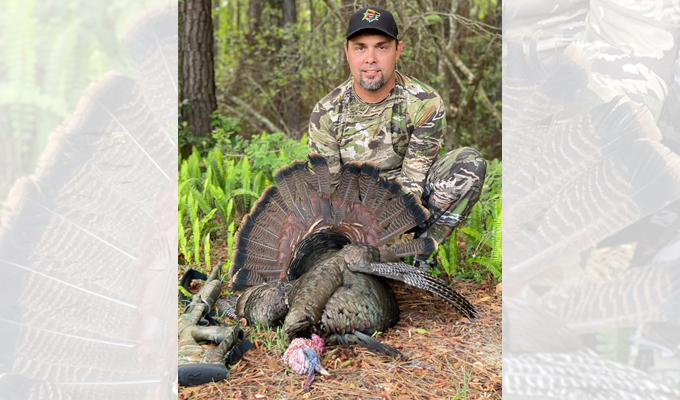