Warm weather had critter numbers down, but the fellowship and education made this an event with lasting fruit.

I wanted to take a moment and sing the praises of the Georgia Trappers Association (GTA) and the Youth Competition they put on this year.

I was fortunate enough to run into representatives of the GTA at the GON 2021 Outdoor Blast last year and learned that they sponsored an annual youth competition for boys and girls interested in learning more about trapping and the outdoors. As a father of four who has a serious addiction to all things taking place in the Georgia woods and who is always looking to keep my kids off the couch and away from modern technology, I knew that this would be an amazing opportunity! 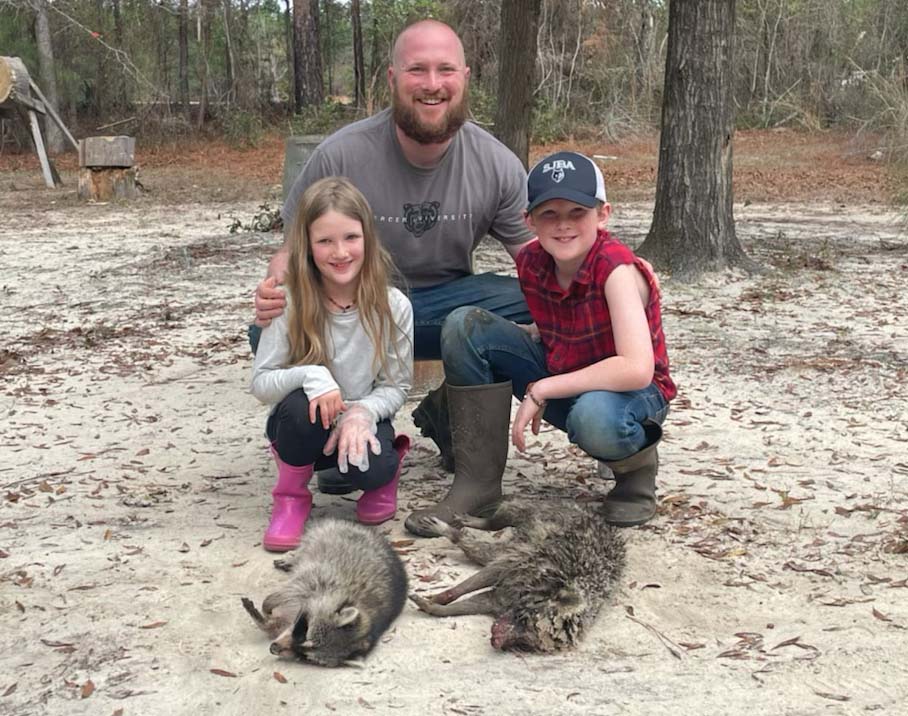 I called up Jonathan DeThomas, one of my best friends, and a diehard outdoorsman, and we made a decision to load up our kids and head down to Swainsboro over New Year’s weekend and check out the competition. After a three-and-a-half-hour drive, we arrived at our motel late Thursday evening, Dec. 30, and after a few hours catching up and swapping hunting stories, we turned in early.

The next morning, we were up before sunrise and made the short drive to the meeting location. We spent the morning meeting the GTA mentors, reviewing safety and learning the basics of setting traps. Once we had a basic understanding of snares, dog-proof traps, coyote traps, scent control, how to hang onto all of your fingers, and plenty of other things necessary for safe and successful trapping, we were separated into groups and headed out into the field.

I was just along for the ride, but my 9-year-old son, Henry, and his 7-year-old sister, Mary Margaret, were totally hands-on. They spent the entire day (8:30 a.m. until dark) setting traps for everything from coons to coyotes to beaver. They learned more in 10 hours running a trapline than most kids do in a month of school.

Mary Margaret, who can’t sit for 15 minutes in a deer blind, could hardly wait to move from set to set, and her brother, who has always been a pint-sized Daniel Boone, spent the entire day scheming non-stop about how he was going to catch everything from an opossum to Bigfoot.

We had lunch with all of the other groups and got to fraternize with a dozen or so members of the GTA. They were some of the most knowledgeable and passionate people I have ever met and would patiently answer dozens of questions from chatty elementary school students or ignorant trapping novices like myself. Afterward, we headed back to the field. The day went by in a blur of fun and anticipation and ended with dreams of what tomorrow would bring.

The next morning, we woke up even earlier and headed from our motel back to basecamp to meet up with our group and check our traplines. Hopes were high for all of the kids, but the reality was that the warm weather (so warm in fact that our entire group swam in a beaver pond… on purpose… in January) meant that there would be way less nighttime movement for the area’s furbearers. As we moved from trap to trap, many turned up empty.

About halfway through the first morning, we came to a place where some dog-proof traps had been baited with corn the day before. We saw movement from the road about 100 yards away. The excitement in the truck generated enough noise to scare away anything not stuck in a trap! Mary Margaret had caught a coon! To say that she was over the moon would be to sell the moment short. She was ecstatic, and after pictures were taken and the critter was dispatched, she rode to the next trap with a smile from ear to ear. Henry caught a coon in knee-deep swamp water about 30 minutes later. He was as happy as the day he shot his first buck! We rounded out the morning returning to camp to see the coons, opossums and beavers hauled in by the other teams. We ate some of the best ribs I’ve ever eaten and spent the afternoon resetting traps and setting new ones. Sunday morning was similar to Saturday, and our group added two coons and an opossum, with Henry catching one of each.

We returned for lunch and ogled the beavers, coons, opossums and one beautiful bobcat caught by the other teams. We all gathered at noon to share stories and give awards to the winners.

Henry won second place overall and received a plaque and a heap of prizes.

Needless to say all of their Christmas money was spent buying traps, snares, lures and a long list of trapping related items. Their beautiful mother and younger siblings have had to endure story after story of their exploits. As I write this, the woods behind my house contain a number of traps baited and checked daily to try to add to their success.

I could fill a book with the details of fun and fellowship we experienced at this event, from a beautiful devotion on God’s creation, to ax throwing, grilled beaver backstrap, alligator sightings and some of the best people you will ever meet. This was truly an event that my children and I will remember forever.

In closing, I want to empathize two things. First, I was in awe of the volunteer GTA members’ patience and love for their craft that I saw at the GTA Youth Competition. Josh Hall and Bryan Rooks were beyond impressive. They were caring, encouraging and willing to dedicate their entire weekend to making all the kids in our group feel as loved and supported as they would their own. I will never cease to be amazed by the goodness of the hardworking people you meet in the great outdoors.

Lastly, I am overwhelmed by the goodness of our Lord Jesus Christ and what a beautiful world He has created for us. While on this trip, I didn’t see a single young person on their phone or speaking/behaving in a way that they wouldn’t in front of their grandmother. Praise be to Him for the blessings of family, fellowship and weekends together, in nature, remembering what is most important.

The GTA also hosts an adult trapping competition. More can be learned on their website and Facebook pages.