From The Field To Your Trophy Room

Proper care of a trophy kill from the time it hits the ground can make a huge difference in its appearance on the wall. 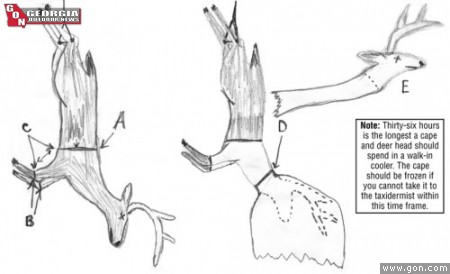 Taking a wall-hanger is a dream most hunters and fishermen have every time they head to the woods or water. The buck of a lifetime or the biggest fish you ever caught is something to be proud of, and these trophies deserve a place of honor above your mantle or in your trophy room. They spur memories and conversation about that triumphant moment when all the hard work came together and a goal was achieved.

But, in order for your taxidermist to create a life-like mount of your trophy, the preparation must begin at that triumphant moment.

While at the GON Outdoor Blast, I sat down with a couple of taxidermy buddies, Wallace “Frog” Mullis, of Cochran, and Rodney Casteel, of Juliette. Among other things, we talked of a problem every taxidermist has — the improper handling of trophies before they come into our shops. In this article, I will detail the steps it takes to deliver your trophies to the taxidermist ready to be made into life-like mounts for your wall.

Every year we take in multiple bucks with ruined capes. These capes were either cut too short or incorrectly, or they were allowed to spoil by being left in the cooler too long and were not frozen quickly enough. This causes extra effort to save the customer’s original cape, and sometimes salvage of the original cape is not possible, and a replacement must be found.

These are just a couple examples of easily avoidable ways to ruin a trophy. The following is how to properly handle your trophy buck once you get it on the ground.

From the very beginning, try to take care of the cape and antlers. If at all possible, do not drag your trophy out of the woods behind a 4-wheeler; make sure it is loaded up on the vehicle. If the animal must be dragged out, make sure the shoulders and head are kept up high enough that they don’t drag over the ground or over stumps and logs, as this will damage the antlers and the hair on the buck’s shoulders.

If you must drag the buck by yourself, then I suggest using something under the buck to protect the side of the animal facing the ground. A piece of cardboard attached with a bungee cord works well for this. A piece of heavy plastic sheeting also works well.

Once you get your buck out of the woods and onto the skinning pole, it’s time to cape your buck. For you guys and gals who do your own processing, I have included a detailed diagram for how to cape your deer out for the taxidermist. Cut the diagram out, and hang it up somewhere at deer camp for future reference, or keep it in your truck and share it with your buddies.

Now for the majority of folks who will be taking their trophy buck to the processor, you should be responsible for your own trophy. Do not blame a processor for a spoiled trophy. Find out ahead of time what they do or don’t offer, and do not assume anything.

One of the biggest mistakes hunters make is not asking their processor if they have room to freeze the trophy until the hunter can return to pick the buck up. A deer head and cape should not be left in a cooler any more than 36 hours before being frozen. The key word to remember here is bacteria. Bacteria can and will survive and thrive in temperatures above 32 degrees. This is the enemy of any trophy animal or bird, period.

A deer, bird or fish that is not frozen and is sitting in a bag or box is basically sitting in a pool of fluid or blood, and it is just waiting while Mother Nature takes her natural course. Once an animal sours or spoils, it is impossible to reverse the process.

I can’t tell you how many times I have had customers bring in deer that have been in a cooler for more than two weeks. The skin will be green, and the hair stays in the bag when you take the rest of the cape out. I have also had customers bring their frozen deer into the shop, and then I discover from the smell the next morning that they were horribly spoiled.

If you take your trophy to the processor, be sure they know how to properly cape your buck and that they have freezer space for your caped trophy. And, pick it up as soon as possible because freezer space is at a premium during deer season for most of the processors I know.

Or, just do the caping yourself and leave the meat with your processor. It really only takes a few minutes to properly prepare a deer for the taxidermist. If you follow the simple diagram, you will be able to cape your own trophy and not have to rely on someone else to do it for you.

Ducks, Turkeys and Other Birds

While we are on the subject of preparing trophies for the taxidermist, I will mention a few other items. For ducks, turkeys and other birds, tuck their heads under one of the wings and freeze individually in a plastic trash bag. Do not gut or field-dress them.

The reason for tucking the head is a bird’s neck is rather thin and fragile compared to its body. If a bird’s neck is frozen straight, it becomes even more fragile, not to mention that it takes up much more room in the freezer.

Tucking the neck and head mainly protects your trophy from the wife or mama, who might inadvertently pop your bird’s head off by tossing a pack of hamburger meat into the freezer.

Also, if you plan to have a turkey mounted, do your best not to shoot the bird in full strut. This can really do a number on the tail plumage. And once you roll your gobbler, get to him as fast as you can, grab him by his feet or the fleshy part of his head — not the feathers. Do not let that bird flop around on the ground and knock his feathers out. To store a duck, turkey or any other bird before taking it to the taxidermist, tuck the head under a wing and freeze in a plastic bag. Tim Knight, an award-winning Dublin taxidermist and bow hunter, provided these drawings to help hunters visualize the proper steps for care of trophy animals.

Properly preparing your 15-lb. largemouth or 3-lb. crappie for the taxidermist is pretty simple, also.

Not to sound silly, but make sure your fish is good and wet before you begin. Put it into the bottom of a trash bag, making sure the fins are all collapsed and tight against the body. Now, roll the fish up in the plastic like a cigar.

As an extra precaution for large fish such as bass, sandwich the tail between two pieces of cardboard on the outside of the bag and secure with tape. This will protect it from Mama and her hamburger bombs.

One of the biggest mistakes you can make is wrapping your fish in newspaper or a towel, even if they are wet, because these items are porous and will quickly draw moisture away from your fish, promoting freezer burn. This is why food items are frozen in plastic only. Plastic does not absorb or displace moisture. The absolute best way to freeze anything is to vacuum pack it.

Full size mounts of mammals such as raccoons, foxes, bobcats and squirrels should be frozen whole. Do not gut or field-dress them. Tuck their head to their chest, and roll them up with their tail around the outside. Place the animal in a trash bag, and freeze it whole.

For large life-size mounts of animals such as bear and deer, contact your taxidermist ahead of time if possible, and advise him of your plans.

As a general rule, large mammals can and should be field-dressed as soon as possible by making an incision from the sternum to the genitals and pulling out the entrails by hand to cool the body cavity. This will allow you to pack bags of ice into the body cavity until you can get it to the taxidermist. For full-body mammal mounts of small mammals, such as foxes, squirrels or coyotes, tuck the head to the chest, and curl the animal up with the tail on the outside. Freeze in a plastic bag.

One other animal we should cover is the wild boar or hog. Hogs should be caped the same as deer. If you field dress a wild hog, make sure to wear gloves to protect yourself from brucellosis and other diseases and parasites.

Preparing your trophy for a trip to the taxidermist is very simple if you take a few precautions. There are many trophies ruined every year because sportsmen did not take the time to learn how to care for their hard-earned kills. Don’t let yours be one of them.

Got to go for now. I’ve got some persimmons and swamp-chestnut oaks that need checking for bow season. Good luck, and I hope you have to call your taxidermist this fall. Always remember, the finished product of a mount is largely determined by the care you take with it in the field. The better shape your trophy is in when it gets to the taxidermist, the better the finished product will be.