Warm-season plots grow antlers and body weights. Cool-season plots provide more than nutrition, they are prime hunting areas for does and big bucks. 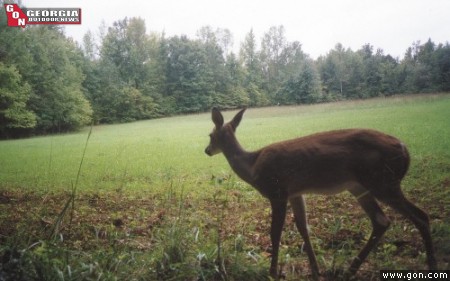 In the late winter and early spring, a food plot planted in the fall like this mix of winter wheat and yuchi clover can be an oasis for deer at a time when quality food is scarce.

The food-plot craze is well entrenched among Georgia deer hunters. The idea of improving the nutrition available to your land’s wildlife, while also dramatically improving your chances of putting venison on the ground, has driven more and more hunters to take the food-plot plunge.

Farmers we are not, but you wouldn’t know that by the way we eye the weather radar.

In the April issue we talked about warm-season food plots, and our initial plantings in Putnam and Morgan counties were met with one of the driest springs in middle Georgia history. As a result, we replanted some of our plots in June, and those pea patches flourished under repeated June and July showers (see the photos on page 46). The deer on our hunting areas have had a belly full of peas this summer, but now it’s time to dig those plots up again.

Cool-season plots are by far the most popular among hunters for the simple reason that in addition to providing added nutrition, deer are attracted to the plots during the hunting season. A look at last season’s Truck-Buck coverage proves how effective hunting over cool-season food plots can be for getting a shot at a mature buck.

There are many options when it comes to what types of seed to plant in the fall. Since providing high-quality food over the winter is a priority for us, we eliminated foods that die out when the frosts of November hit. We want to plant fields that would stay green all winter and carry us through until next spring, when we will go back and start over with our peas and other warm-season plots.

Perennial Foods Plots — Really!
One change we’re going to try this fall is an attempt at a couple of perennial food plots that won’t have to be replanted next year, or maybe even for several years after that. In past attempts our perennial plots were planted with white clovers, but we didn’t get the results we had hoped for. Yeah, there was some clover out there the next year, but not much, and we ended up replanting. Our acreage for food plots is limited, so we didn’t want one of our fields providing only a mediocre crop of food for the wildlife.

Despite only partial success in the past, the decision to go for a perennial food plot again this year was an easy one, and it’s a decision based on some very good results from test plots in the past year.

How would you like a food plot of white clover that could last six years, or even longer?

Can you say Durana?

Learn to pronounce it because so far in testing this clover has yet to disappoint. Durana is a white clover developed by Pennington Seed right here in middle Georgia. It is a strain of white clover that was persisting naturally in some dairy pastures, regardless of grazing pressure, drought, floods… you name it.

Test plots of Durana clover being done by the University of Georgia are showing no signs of falling off after six years of cows grazing the fields. The protein level of Durana clover is testing out at 28 percent, so there’s no drop-off in quality in terms of nutrition.

Here’s part of a message-board post from a farmer made on a cattle-farming website:
“In November 2002, I drilled into fescue the new persistent white clover called Durana. I was told the previous white clovers were going to be virtually gone by year three, so I wanted to be ahead of the game. I was also told to be sure to keep the fescue from shading out the clover seedlings so it would get a good start. Well, we had rain, and more rain, and by summer, I had clover 11-inches tall and it was shading out the tall fescue. Durana, in my opinion, is very aggressive and is taking over to the point that it appears that I have lost some fescue. There are just large areas with mostly clover and little grass. The cows love it, it is low to the ground and spreads out thick under the past years’ conditions, and did well in the past two months of relatively poor moisture.”

So what’s the downside? The only one we’ve found so far is that Pennington can’t make this stuff fast enough. It is tough to find. It is primarily being snatched up by cattle and dairy farmers. Try your local feed-and-seed first, but if they are out, do an internet search for Durana clover and you should find some online seed dealers.

If you can’t find Durana clover, ask for Pennington’s Patriot clover. Early indications are that Patriot provides a tad more forage than Durana, but might be just a tad less persistent.

“Durana is probably going to be a little hard to find this year, but we’re going to have plenty of Patriot,” said Kyle Atkinson, Pennington’s forage specialist for Georgia.

“Patriot is a cross of Durana and another white clover that is an intermediate clover. It grows a little taller than Durana and puts out a little more forage. But they’re really interchangeable. Folks won’t know the difference,” Kyle said.
“These clovers are extremely tolerant. They are runners, they creep and spread, and it’s real aggressive. A typical ladino clover will grow up and have a few leaves on top, and when a deer nips off those top leaves it really slows the growth. Patriot and Durana also have smaller leaves closer to the ground, so it keeps the photosynthesis going, so the plant can regenerate and grow back. Plus, because of the runners and stollens that creep and peg themselves out, an animal can’t tear it out of the ground. If it can tolerate cows, it sure should be able to hang in with deer that pass through and browse. And it has. It’s exceeding the expectations.”

In our first food plot, we’re going to mix winter wheat and oats with our clover to help protect it as it first gets started. These cereal grains won’t provide food beyond the following May or June when they seed out, but between now and then they offer some good variety. (Turkeys and other birds love the wheat and oats when the seed heads mature).
Hopefully by the following fall, we’ll still have a good stand of clover. One warning, clovers are very sensitive to herbicides, but weeds are going to be a problem. It helps to spray a plot at least several weeks before you plant to clean the weeds up. You will definitely have to keep the plot mowed down in the spring and summer to control the weeds.

Our second perennial plot is going to be based around chicory, and again, we’re basing this decision on success with chicory in test plots right here in middle Georgia. Chicory has a deep taproot, is very drought resistant and is high in mineral and protein content, and it stays green year-round.

County extension agents in middle Georgia have been testing various food-plot seeds for several years, and chicory is preforming great. After more than a year in the test plots, chicory has withstood heavy grazing and drought conditions.

“The deer can literally nip it off at ground level, and the stuff puts leaves right back on,” said Keith Fielder, the county agent for Putnam County. “Plus it grows year round. We planted ours a year ago. Even in drought conditions in our excluder cages it was gaining height. As soon as we got rain in June, it took off again and really put on growth. The deer keep it mowed down to about three inches outside the excluder, and inside the cage it’s pushing 20 inches. We had a deer push one of the excluders over to get to it.”

In this second perennial plot, we’re going to dip into our bag of Patriot clover and mix this white clover with the chicory. Other potential seeds to mix with the chicory are other “greens” like kale and rape, or the cereal grains like winter wheat and oats.

Both Keith and Kyle made a point to recommend that hunters not plant ryegrass in any of their food plots. Rye is OK, ryegrass is different but is included in some pre-mixed bags.

In our cool-season plots, we’re going for maximum nutrition with the white clovers and chicory.

However, you can have a fall food plot that will provide food (albeit less nutritious) that will attract deer, it won’t cost near as much, and it’ll dang near grow on concrete. It’s a simple mixture of winter wheat and oats — or just one or the other.

Last fall in Morgan County, I planted a small strip of a woods road with winter wheat. Repeatedly this small green patch was a go-to stand when someone needed to put a doe in the freezer. Another bigger 1/2-acre plot with just winter wheat attracted deer from when it came up in October, through the hunting season and the winter, and on up until the woods greened up in late March. Then, when the wheat headed out the last week in May, the deer hammered it again, stripping every seed head. Turkeys, doves, and huge numbers of other birds were feasting on the wheat seed as well. Don’t scoff at these “poor-man” plots. If you’re willing to compromise the better nutrition you’ll get with clover or chicory, they could be your Money Plot this fall.

If you’re planting this fall, you should have already had a soil test done by your county agent. Follow the recommendations. If you want a Money Plot, don’t skimp on the fertilizer!