The woods rang out with the sound of hounds at Georgia State Nite Hunt. The hounds struck soon after being dropped for the first time of the evening, raising a din that echoed across the valley and through the bright moon-lit woods of Oconee County.

“Jake strike!” barked Jake Garner, of Zebulon, the elected president of the Georgia Federation of Coon Hunters and the judge of this evening’s cast. Those were the first words spoken since the hounds had been loosed into old-growth mixed pines and hardwoods. The three hunters weren’t talking. They were listening intently for the distinctive sounds of their own dogs’ voices. That’s how points are scored in competitive coon hunting.

“Goose Strike!” said Jason Lemley, of Rock Spring, who travelled more than three hours from Walker County with Goose, an English coonhound, and his buddy Charles Sargent to compete in the Georgia State Nite Hunt.

This cast of nite champions consisted of just three dogs, but 90 hounds and handlers from around the Southeast descended on Greensboro last spring to compete in the two-night championship hunt. After drawing their casts of three or four hounds, the hunters spread out to different tracts across the area to vie for the Georgia championship.

After Goose and Jake struck, the track ran out across the wooded valley in front of the expansive dairy-farm field where we stood. The excitement of the coonhounds’ bawling pierced the night, and we all stood listening, waiting for the hounds to tree.

Meanwhile, Austin Daniels, 12, of Watkinsville, was still listening for his 7-year-old female Walker hound, Jesse, to strike. However, before we heard the first peep from Jesse, the cadences from the other two hounds changed, and Jake snapped, “Jake tree!”

Yes, Jake was handling a Walker he shares a name with. Get Back Jake is not Jake’s hound; he was hunting the dog for someone else.

Goose treed a moment later, and Jason made the call. All the while, Jake (the man) was taking notes on a score sheet and making frequent glances at a stopwatch he held in his hand.

Just after the two dogs treed, Austin, competing in the youth division, made his first call of the night. “Jesse strike!” But Jesse was on a different track. She was headed off across the valley away from where the coon was treed.

As a first-time spectator of competition coon hunting, I expected the handlers to now move to the tree and try to find the coon, which seems standard practice when trying to kill them. But everyone just stood there — listening as the hounds held the tree.

“The dogs have to cover the tree for five minutes,” explained Jake, seeing my quizzical expression. “And Jesse has five minutes to tree.”

But Jesse had already topped the ridge on the other side of the valley, and her plaintive bawling could be heard growing softer as she put more distance between us.

Jake eyed his stopwatch frequently, and as the five minutes wound down we began working our way through the woods the short distance to the hounds on the tree. Jake (the dog) was loaded up, stretching his front legs as high as he could on the thick trunk and giving the coon all his voice box had to offer. Goose could not be contained after an afternoon spent in the dog box on the back of the truck. Like a kid on a trampoline, she was doing all she could to bounce up into the limbs of the pine.

“She’s wired. A friend of mine told me I needed to put her on Ritalin,” Jason later said. “I tried to get her to quit doing that, but she just gets so excited. I don’t think she can help it.”

At the end of the five-minute period, Jake gave the word, and the men moved in to leash the hounds to nearby trees. Now it was time to look for the raccoon. Since Jake (the dog) treed first, Jake (the man) would get the first opportunity to shine. He spent his allotted two minutes of shine time illuminating the upper branches of the thick pine canopy with a powerful headlamp. Once those two minutes were up, Jason was allowed to join in, and he threw his beam into the treetop.

This is where the rules and points system began to get a little complex. Each hound was awarded a descending number of points in the order they struck and treed. The first dog to tree gave its handler the first opportunity to shine, but because there was a hound that had not yet treed, the shiners were not yet allowed to use their squallers — calls that imitate a distressed coon. If all three hounds had been on the tree, the handlers would have been allowed to use their squallers throughout the shine time.

“The squaller will sometimes make the coon move or look at you,” Jake said. “So you can see its eyes.”

With Jesse still not on the tree, Jake and Jason were only allowed to begin squalling with three minutes of the total 10 minutes of shine time remaining. And squall they did, Jason with a store-bought squaller and Jake somehow making the high-pitched screeching noise with his mouth. The two men circled the tree, moving in and out and looking from different angles into the thick upper branches. But time was running out.

Jason had pulled his hat and headlamp off to better search the tree. Now he let them swing to his sides, dejected. The hunters got together for a minute then broke, and Jake proclaimed, “Tree’s circled.”

Jake later explained that since they had not found the coon, but because there was a high likelihood the critter had denned up in the tree somewhere or made itself invisible in the thick foliage, the points would be circled on the score sheet. The drop would not be counted for or against the hounds except in the case of a tie. Then the points would be used as a tiebreaker.

If the tree had been bare, and it had been apparent there was no coon, the tree would have been called negative, and the negative points would have counted against the hounds. If the men had spotted the coon, the dogs would have been granted the points they accumulated during the drop. That was it. Once the coon is either spotted or not, everyone walks away, leaving the critter unharmed.

“It’s majority rules, but we count on honesty for seeing the coon or calling a strike,” Jake said. “It’s a team effort… handler/dog effort. You’ve got to know your dog and know the rules. When they get to the tree, it’s an honor system.”

The hunters get a total of 120 minutes of actual hunting time, which gives time for multiple drops since the stopwatch is only running while the hounds are on the ground. The scoring and rules are more complex than it’s worth describing, but they assure a good clean competition.

“You wouldn’t think the rules would be so in depth,” Jason said. “But they are. They’ve pretty much got a rule for any situation you run into.”

To our youth hunter’s advantage, there is also a rule for hounds that run off. By this time, from what it sounded like, Jesse had tracked something over the next ridge, through the adjacent gully and up toward a nearby blacktop. Mike Moody, of Watkinsville, our guide for the night, called an endangerment timeout because he was afraid Jesse might be in danger from cars on the road. Austin had an hour to find his hound and get back without it counting against him.

Mike and Austin got the tracking gear and headed out after Jesse, which provided a prime opportunity for a discussion with the other hunters.

Coon-hunting technology has come a long way from the days when you put on your boots and headed into the woods with a .22, a flashlight and some hounds. Jake took the timeout to show me the gadgets wired onto Get Back Jake’s collar.

The collar had a light to make the dog more visible in the woods or to drivers if he got in the road, and there was also a tracking unit with an antenna, which could be followed on the Garmin GPS Jake carries when he hunts. The GPS unit gives Jake a pinpoint location for his hound on a map displayed on the screen. This is a huge advantage over older radio-based systems that only tell the user what direction the dog went.

Using a similar tracking system, Mike and Austin returned with Jesse in tow about a half-hour after they set out. They had found her holding a treed coon over by the road. When she took off, Austin seemed to know exactly what she was up to. Although he was competing as a youth, Austin has some experience under his belt. He’s hunted with his dad since before he can remember, and, at 7 years old, Jesse is a laid-back old veteran of the coon woods. Too bad points aren’t awarded during timeouts.

With the group back together, everyone loaded up in their trucks and it was on to the next drop behind some nearby chicken houses. Again, it didn’t take long for the hounds to strike. This time, all of the dogs were in on the clamorous chase, and it was soon apparent we would have to high-tail it after them if we were to keep up as they tore across the countryside, crossing creeks and fences and startling a pasture full of curious goats before loading up on a massive bare-limbed oak.

About 10 minutes later, when we finally arrived at the tree, the hounds had held it for the required five minutes, and they were leashed off before the hunters went straight to squalling and shining. The coon was never spotted, and this time it was apparent there was no raccoon in the tree. The hunters got together and decided to give themselves negative points before beginning the long walk back to the vehicles.

It was nearing midnight, and there was still plenty of time on the stopwatch for another drop or two. The hunters would go on to another location before reporting back to the Greensboro Fairgrounds for the final tally of the scores. As it turned out, none of the hounds I had the pleasure of listening to placed in the top five, but it was fun watching them work.

As we cut across a pasture and headed down the two-lane to avoid the creek and fence crossings on the way back to the vehicles, it became evident why each group is hooked up with a local guide. It’s really not for fear of getting lost. Mike had us cut off our lights and keep our voices low while passing one particular small house at a bend in the road.

“There’s an old lady who lives there. She’ll wake up, get scared and call her son over to come see what’s happening,” he explained. “It’s just crazy what goes on late at night in Oconee County, isn’t it?” 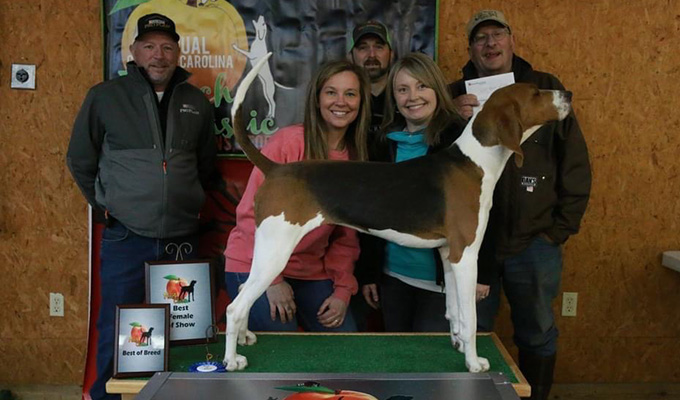 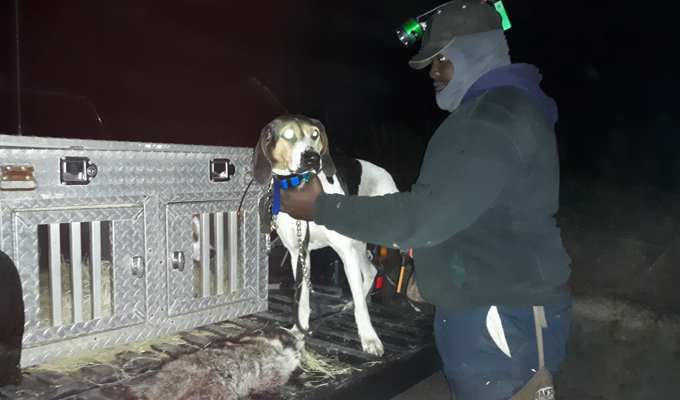 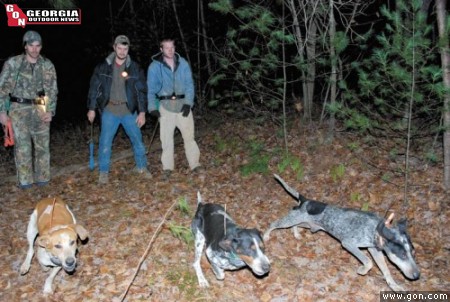