I thought I would share some pics and the story from our recent alligator hunt in the Altamaha River. The lucky hunter was Danny Cochran, of Dalton, and he used seven of his “sacred” priority points to draw a tag for Zone 7.

We drove down to Darien on Thursday, Aug. 26 and stayed at the Darien Dockside Inn (which we highly recommend). After dealing with some thunderstorms and vehicle problems, we began our hunt on Friday night.

We started in Lewis Creek and then moved to the bigger water of the Altamaha River. Over the course of the next few hours, we saw several small, 4- to 6-foot gators but had a difficult time finding a mature one.

I would also add that we were surprised just how skittish even the smaller gators were. Most would only allow us to get within 40 or 50 yards before submerging. We ended our first night’s hunt around 1 a.m. after the tide had come back in and most gators seemed to disappear back into the marsh grass.

Our second night of hunting started out a little better as we spotted a mature gator just before dark. However, he disappeared as we were making our approach, and we were not able to locate him again. The rest of the night’s hunt was like the first with a lot of small gators that seemed very skittish, and they seemed to disappear for good as soon as the water got back into the marsh grass.

We were planning to head home on Sunday morning but decided at the last minute to make one more trip up the river since the tide was going out. We left the ramp around 7:45 a.m. and began seeing small gators almost immediately. As we made our way to the general location where we had spotted a mature gator the night before, we saw what we thought was a log in the middle of the river (I thought it was a gator, but my partners argued). On closer inspection, we confirmed it was in fact a large gator.

We began slowly working our way within casting distance of him, and once we got to about 50 yards, we let the 12/0 treble hook fly. Luckily, we made a great cast that landed just behind the gator’s front shoulder, and after a couple of quick turns of the handle and a hard hookset, the battle was on.

We had no idea how big the gator was, but we knew he was the biggest one we had seen so far. Once we got the boat in position near the gator, my son Luke was able to get a larger treble hook in him with a handline. We noticed right away the gator didn’t seem to make any big runs. He just went to the middle of the river and laid on the bottom. At one point we were afraid that he had gotten under a log.

After several minutes of pulling with both the rod and the handline, we were able to get the gator up to the boat to see what we had. I think all three of us were shocked and amazed at the size of the head on the beast. We made the decision to go ahead and get a harpoon dart in him the first chance we had, which proved to be a challenge since both hooks were near the gator’s head, making it difficult to see his body, but we finally got the dart in the soft skin of his jaw.

Now that we had him secured, it was time for the bang stick. Our first couple of attempts missed the mark, and suddenly we realized we only had one .357 bullet left, and we knew we had to make it count. Fortunately, we did, and the beast was dead! Here’s the team that boated this 12-6 beast from the Altamaha River (from left) Danny Cochran, Luke Headrick and Russell Headrick.

As it turned out, the hardest part was still ahead of us, which was actually getting him in the boat. It took several attempts and a lot of sweat, but we got him in and couldn’t wait to get him stretched out to see exactly how big he really was. We packed him in ice and wrapped him in a tarp and made the long drive home.

When we got him stretched out and pulled the tape, he measured 12-feet, 5 1/2 inches long, and we were thrilled. To be honest, we were hoping for a 9-footer. Can’t wait to do it again! 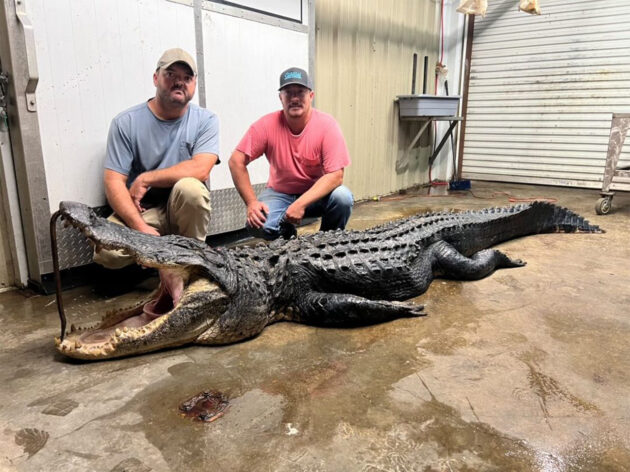