Silver Lake WMA Profile: A Public Property For All Seasons Scott Overman, of Bainbridge, passed a good-sized young buck early in the day to harvest this mature buck only a short while later during a 2008 quota hunt at Silver Lake WMA.

While the budget crunch has some WMAs in the state disappearing altogether, there is a new one that will thrive thanks to funding from the state and several other sources. Silver Lake WMA, in Decatur County, offers hunters and anglers 9,200 acres of some of the most diverse hunting and fishing opportunities of any WMA in the state.

The tract is named after the 300-acre, once-private fishing lake the area surrounds. It is laid out along the shores of Lake Seminole and the Flint River, and for 50 years had been the private forestry-research site of the International Paper Company. Now, those acres have been purchased by the state for any hunter with a $19 WMA stamp to take full advantage of.

With numerous longleaf pine and wiregrass stands estimated to be 60 to 90 years old, there are plenty of high pines to take your climber up and wait for a shot on a passing deer. But the property also contains numerous hardwood and younger pine stands and wetland bottoms for the wildlife to use.

And while Silver Lake WMA might be a large WMA, that doesn’t mean it isn’t easily accessible. The land is split up with many paved and unpaved roads that make most places on the property accessible without a 4-wheel-drive truck. What isn’t accessible from the road is almost certainly accessible by boat, with a large majority of the tract bordering the Flint and Chattahoochee Rivers.

But, it isn’t the accessibility that interests most outdoorsmen about Silver Lake WMA, it’s the 50 years of once-private hunting land the general public now has access to. After the first season of hunting has passed, it might not be as great as it was last year, but it still has plenty to offer.

During the November quota deer hunts last year 75 hunters killed five bucks and 15 does for a hunter-success rate higher than 26 percent. Since November is still a pretty mild month in southwest Georgia, you can expect November numbers to be lower than a December hunt. The rut on Silver Lake doesn’t really peak until about the third week in December, which could explain the high antlered-deer harvest during the December quota hunt. Eighty-five hunters killed 25 bucks and nine does for a hunter-success rate of 40 percent.

The sign-in hunt was crowded last year, with 303 hunters harvesting only eight bucks. The January sign-in sheets were most likely stolen from the kiosk, but at least two does and four bucks were signed out. Of course, with this year’s quota drawings already finished, a sign-in hunt is your only choice if you weren’t lucky enough to be drawn.The good news is, there’s plenty of opportunity.

A lot of hunters in Georgia are strictly deer hunters, and they’ve got a whole lot of things to be happy about at Silver Lake, but there’s another group of hunters that has been salivating over the chance to hunt the property for years — turkey hunters. It’s no wonder either, with the number of mature toms roaming the land.

The day before the season opened in 2009, I personally heard no fewer than 10 different gobblers within a mile radius on a scouting trip. Because they have the uncanny ability to know when the season opens, only a few of them were talking on opening day, but it was still a heck of a time chasing around the ones that were. I witnessed three gobblers in full strut from a hill at 100 yards in a wildlife opening but just never could talk one into coming our direction.

I was unsuccessful for the week, but there were quite a few people who weren’t. During the adult-child quota hunt, 13 hunters killed one jake and one gobbler. During the March 21-29 quota hunt, which I was a part of, 26 hunters killed three gobblers and a jake. With only 26 hunters to 9,200 acres, that’s still one hunter to every 353 acres. I can vouch for the claim, if you do get picked for the quota hunt, you probably won’t see another hunter the whole time. The sign-in hunt held after the quota hunt from April 15-May 15 hosted 43 hunters who harvested two gobblers, but DNR officials said the harvest sheets were probably stolen in this case, as well.

B.J. Grubbs, of Eldorendo, who was featured in last May’s issue of GON for his late-season WMA tactics, had the chance to hunt the WMA with his grandfather during the March quota hunt and said he really enjoyed it.

“This place is a turkey-hunter’s paradise. It might not ever be as good as it was this season, but we saw a lot of turkeys,” he said.

Hunters who make the trip to southwest Georgia during turkey season will also have another option during the day rather than snoozing, and that’s fishing. Silver Lake WMA is home to one large lake, for which the property is named, and more than 20 smaller ponds which include 13 boat ramps. The shellcrackers usually begin bedding in late March and continue through April, and the bream will pick up where they left off in May and continue almost the entire summer. The bedding bite will always be better close to the new and full moons, but you can bet you still won’t be wasting your time whatever time of year you go. These two anglers are ready for a fish fry after a morning of fishing at Silver Lake.

The topwater-bass bite should begin to pick up in early fall, as well, and you can bet you’ll have a good time throwing a frog or Spook around the masses of lily pads that cover the majority of shoreline on Silver Lake and some of the smaller ponds. Though it might be a small lake, the boat ramps at either the north or south end of Silver Lake offer easy launching even for bass boats. I wouldn’t expect to use the outboard too much with the vast number of stumps that lie hidden just a few feet under the surface, but it only takes a short while to idle to one end or the other of the lake. The only trouble one might have with a larger boat is some of the roads leading to the ramps might be difficult to navigate because of trees being so close to the road, but an experienced boat hauler shouldn’t have a problem.

Josh Long, of Bainbridge, is one of many local residents happy to see Silver Lake open to the public.

“It is really nice having another great place to fish close to my house,” he said. “Between Lake Seminole and Silver Lake, I have no reason to fish anywhere else.”

Josh has already had several good bass-fishing trips. He said some days he fished early morning and others during middle of the day until dark.

“One day we fished from daylight till dark. We caught bass on all sorts of baits from buzzbaits and spinnerbaits, to Rat-L-Traps to soft plastics,” he said. “I’m just glad I now get to fish this wonderful lake.” The WMA has numerous marked ponds on the map for fishing, but it also has plenty that aren’t marked or don’t have vehicle access to launch a boat. Many of these ponds are excellent wood-duck habitats, and I witnessed a large number of woodies in just the few waterholes I stumbled across during my turkey adventures in the early part of turkey season.

One thing to consider while duck hunting in south Georgia is the abundance of alligators that don’t have any need to hibernate or slow their activities during the winter. Because winter temperatures usually remain mild, alligators are a threat to retrieving dogs throughout the year.

Now that canvasbacks are back in play for the 2009-10 season, there should be a pile of them harvested because of the ones which weren’t shot last year. Many hunters reported as many cans rafting as coots in some areas because they just weren’t being shot at. It probably won’t take long for the cans to figure it out. But, a joint deer and duck hunt at Silver Lake WMA and Lake Seminole might be a less-expensive route for the annual Christmas vacation hunting trip to the Mississippi flyway — granted you got lucky and were drawn for a hunt.

As far as lodging is concerned close to the area, you’ve got a lot of choices from camping, to cabins, and even the hotels in Bainbridge are only 10 to 15 minutes away. If you’re looking for primitive camping, Hale’s Landing on the Flint River is just before you get to the WMA on the left off of Ten Mile Still Road, and some of the WMA actually borders the campground. The nice part about camping here would be the boat access to a large majority of the WMA. But, even if you camp somewhere else like Wingate’s Lodge across the lake, it’s only a short boat ride even in the dark (10-15 minutes maximum) to the shores of the WMA. Spring Creek Park Resort is also close and offers camping, cabins and other lodging a short drive or boat ride away. The advantage of a boat would be easier access to places farther off the roads where other hunters might not want to, or be able to walk to.

One thing hunters might want to be aware of is that a large portion of what used to be Corps of Engineers land that you didn’t have to be drawn to hunt is now part of Silver Lake WMA. Be sure to check a WMA map before hunting what you think is corps land.

Whatever it is you like to do in the outdoors, you’ll find a place to do it at Silver Lake WMA. There’s unlimited hunting opportunities and fishing year-round. There’s even a picnic area overlooking Silver Lake that would be perfect for a romantic dinner. Just be sure to pack a rod and a topwater frog to hoist in a few dinner guests from under the lily pads. 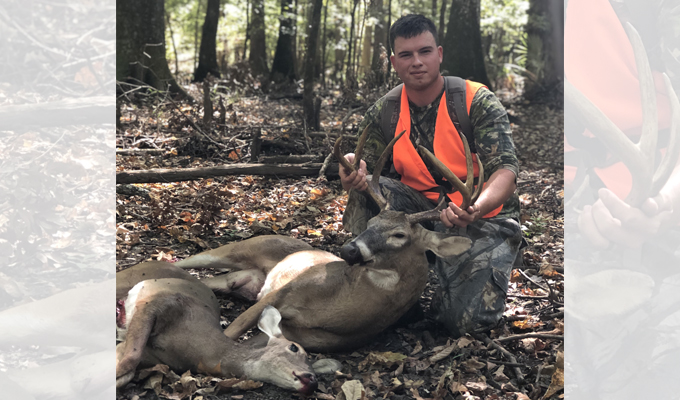