A deer-dog hunter at heart, Lindell Richey sat in a ladder stand on property he’d never hunted before and killed the deer of a lifetime. 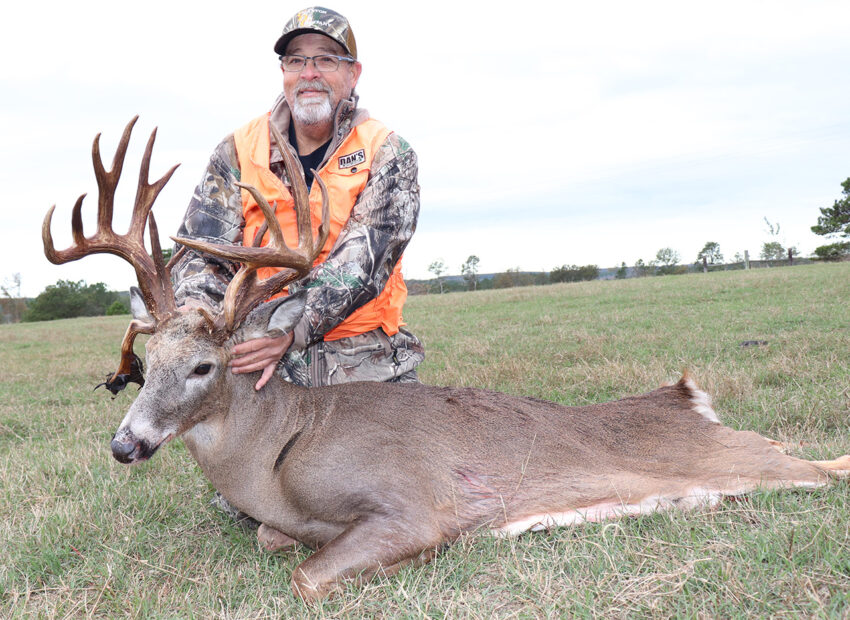 Lindell Richey, of Claxton, is a deer-dog hunter at heart. With 22 canine mouths to feed at home each day, he never imagined he’d kill a 200-inch buck in Greene County—on a piece of property where’d he never been—while sitting in a deer stand.

“I wasn’t even going to go,” said Lindell. “But my brother-in-law Scott Glen asked me, so I went. If my life depended on getting back to where we were at, I’d lose it. I have no clue where we were other than Greene County.”

Another friend of Lindell’s, William Pettie, put him in a ladder stand and told him good luck before going hunting in a different spot. Lindell had heard the guys say there was a big buck using the area, but he had no clue it was a deer in the 200-inch caliber.

“He came out about 5:30 and was 50 yards away,” said Lindell. “I put my gun on him and thought he sure did look like a good deer. I thought it must be the one they were talking about. He started walking straight toward me and turned broadside at about 40 yards, and that’s when I took the shot.”

Lindell didn’t ride all the way to Greene County just to kill a small buck or freezer meat. When Scott and William heard him shoot, they knew it was a good one. The harassing texts from Scott and William began, as would be the case for most family and friends who invite someone to come hunt one of their stands as a guest and shoot the buck of a lifetime.

About an hour later, GON received the photo, along with some neighboring hunters.

“A man sent me a video of him, he’d been watching him three of four years and feeding him protein,” said Lindell.

The 25-pointer is a main-frame 10-pointer with 15 abnormal points. Two unofficial measurers grossed the buck between 200 and 204 inches. Abnormal inches added up to 46 inches. The buck has few side-to-side deductions, which is going to put it close to the 195-inch minimum for B&C non-typical. Lindell’s 25-pointer is a main-frame 10-pointer with 15 abnormal points.