The stockings take place in the spring, but the undertaking is a year-round project. Creating live creatures in a laboratory may seem like a dastardly scheme out of some B horror movie, but it’s a process that many Georgia fishermen live for. For many of those fishermen, the lineage of their biggest fish ever can’t be traced back to Mother Nature.Those fish got their beginnings in WRD Fisheries hatching jars in Bryan County.

Literally millions of hybrid and striped bass swim in Georgia waters. Those favorites of many anglers would not be there without the efforts of WRD fishery biologists and their laboratory tricks.

Georgia anglers are aware of the striped bass and hybrid bass fisheries that can be found here. Many fishermen, however, are oblivious to the fact that those fish are not naturally occurring. The third lineside species, the white bass, is found naturally in the state, but is also being replenished by stockings in areas where its numbers have seen a dramatic decline. The white bass also play a critical role in the laboratory creation of hybrid striped bass. Here’s the end goal, a big striped bass on the end of the line.

Confusing to many is if the striped bass is a saltwater fish, how can it survive in freshwater?

Striped bass are an anadromous fish, meaning that they migrate between fresh and saltwater, Harper explained. Normally, they live in the ocean and spawn in freshwater. That occurred naturally in Georgia before dams were in place. The concrete barriers prohibit the spawning runs and the lengthy river-runs and current needed for striped bass eggs to hatch. The fertilized eggs of stripers need to be constantly moving in a river current for two to three days before they can hatch. If those conditions are not present, the eggs suffocate and die if they sink to the river bottom.

WRD Fisheries bypasses the river-run conditions needed to hatch the eggs by recreating the same conditions in a laboratory. WRD Fisheries stocked more than 1.7 million striped bass fingerlings in Georgia waters this year.

It would be great if all Georgia fishermen would have the opportunity to one day land a 30-lb. trophy saltwater striped bass. Unfortunately, striped bass are not suited to all bodies of water in Georgia. That’s why the state’s lineside stocking program also includes creating hybrid bass.

More than 1 million hybrid striped bass fingerlings were stocked in the state this year.

Jackson Sibley, a fisheries biologist in northwest Georgia, says that Allatoona in particular, is better suited for hybrids, even though there are indications that conditions are improving for striped bass.

“The hybrids provide fishermen with a chance to catch a trophy fish as well as numbers of moderate- to good-sized fish.” “We refine those numbers every year,” he says. “We go out in the fall and do gill-net sampling. We’re looking at fluctuations in age structures and length-to-weight measurements. We’re looking for a good overall picture of how the fishery is doing.”

It takes several years of good water quality to raise saltwater striped bass to size, and apparently Allatoona has seen that in recent years, he says.

“The lake has produced some good 30-pound fish in the past few years,” he said. “That means some fish are finding the water quality that they need as well as some of thermal refuges.”

What exactly is a hybrid bass? Like the saltwater striped bass found in Georgia rivers and reservoirs, it also begins life in the Richmond Hill laboratory.

“It’s a cross between a white bass and a saltwater striped bass,” Harper explained. “We use a female white bass with male striped bass sperm. We’ve found that combination is easier to handle in the hatchery.

“It has the best characteristics of both fish. A hybrid striped bass is more football-shaped than a saltwater striped bass. It’s faster growing. Some people say it’s more aggressive.”

Hybrids prefer the slow-moving current generally found in streams, lakes and large reservoirs. They are rarely found in shallow water. Fingerling stripers are collected before being put on a truck and delivered to Georgia’s lakes and rivers.

Hunter Roop, a fisheries biologist in District II in northeast Georgia, says the three main lakes in his area—Lanier, Nottely and Chatuge—differ in characteristics and are good examples of why lineside stocking varies from lake to lake.

“Lake Lanier offers year-round cool water, and it is a stripers-only lake,” he explained. “Lake Chatuge lacks that cold water (with oxygen) and is a hybrid-only lake. Lake Nottely, thanks to the system that introduces oxygenated water into the lake, is able to support both stripers and hybrids and is stocked with both.”

He says linesides are an important fishery on all three lakes.

“Stripers are extremely important on Lake Lanier,” he said. “There are a number of guides who provide fishing for them year-round.

“On Chatuge Lake, the hybrids are a well-established fishery. It is a popular fishery, along with spotted bass and walleye.”

In recent years, WRD Fisheries has added the raising of white bass and white bass stocking to its efforts. That fish, which occurs naturally across the state, is seeing a decline in population. Harper said that decline can probably be traced back to the unauthorized introduction of blueback herring, which apparently are eating white bass eggs.

More than 640,000 white bass fingerlings were stocked in six Georgia bodies of water in 2022.

The lineside stocking program is a major, year-long undertaking for WRD Fisheries. Currently, fishery biologists across the state are studying lineside fishing trends, fishermen participation, catch numbers and other factors for their proposals for stocking of the three species in the spring. They must present those proposals in December.

“Those fish are taken in trucks to the Richmond Hill Hatchery,” he said. “There, the females are injected with a hormone to stimulate ovulation. After 24 hours, we take a sample of eggs. There’s a narrow, 1-hour window there. If you take the eggs too early, they won’t fertilize. If you take them too late, they’ll start to break down and won’t fertilize.

“When the time is right, we’ll strip her of her eggs and those eggs will be put into in a stainless-steel bowl. There, the eggs are mixed from the sperm from male fish. The fertilized eggs are moved to special hatching jars that simulate moving current. They’ll stay there for 44 hours before they hatch. When they do, they are moved to aquariums where they will live off their egg sacs. On day five, their mouth parts form and they can then eat brine shrimp. At that point, they are moved to hatcheries across the state where they are raised to fingerlings large enough to be stocked.” Jars of striper eggs sit in the incubation room. 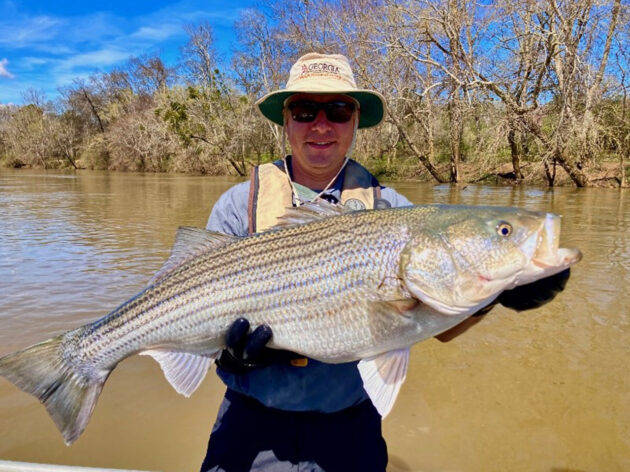 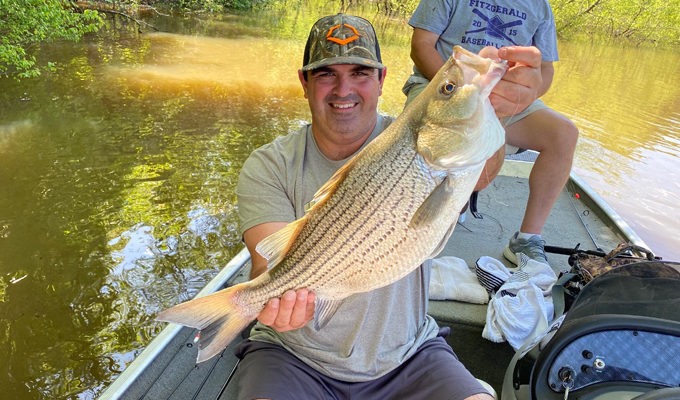