A new blue catfish record has been established on the Oconee River below Lake Sinclair.

With last week’s release of GON’s Georgia Lake & River Records new benchmark fish weights, interest has been on the rise with several new record-class fish taken. The latest record to be caught and certified was an Oconee River blue catfish that was caught May 1 and weighed 33-lbs., 8-ozs. It was the first blue cat ever submitted for the Oconee River.

“We didn’t know there wasn’t a record for blue cat,” said Chase Cheely, 18, of Milledgeville. “I asked (DNR Law Enforcement Ranger) Bubba Lynn (Stanford) the day before if there was currently one, and he said there wasn’t. We’ve caught a bunch of 30s and 20s and figured we’d submit one the next time we caught one over 30.”

Chase’s fishing partner and best friend is Chandler Wooten, 19, of Milledgeville. These two have been fishing off the public pier right below Lake Sinclair in the tailrace since they were about 13 years old. This was the same pier where Chase caught the new record blue on May 1. 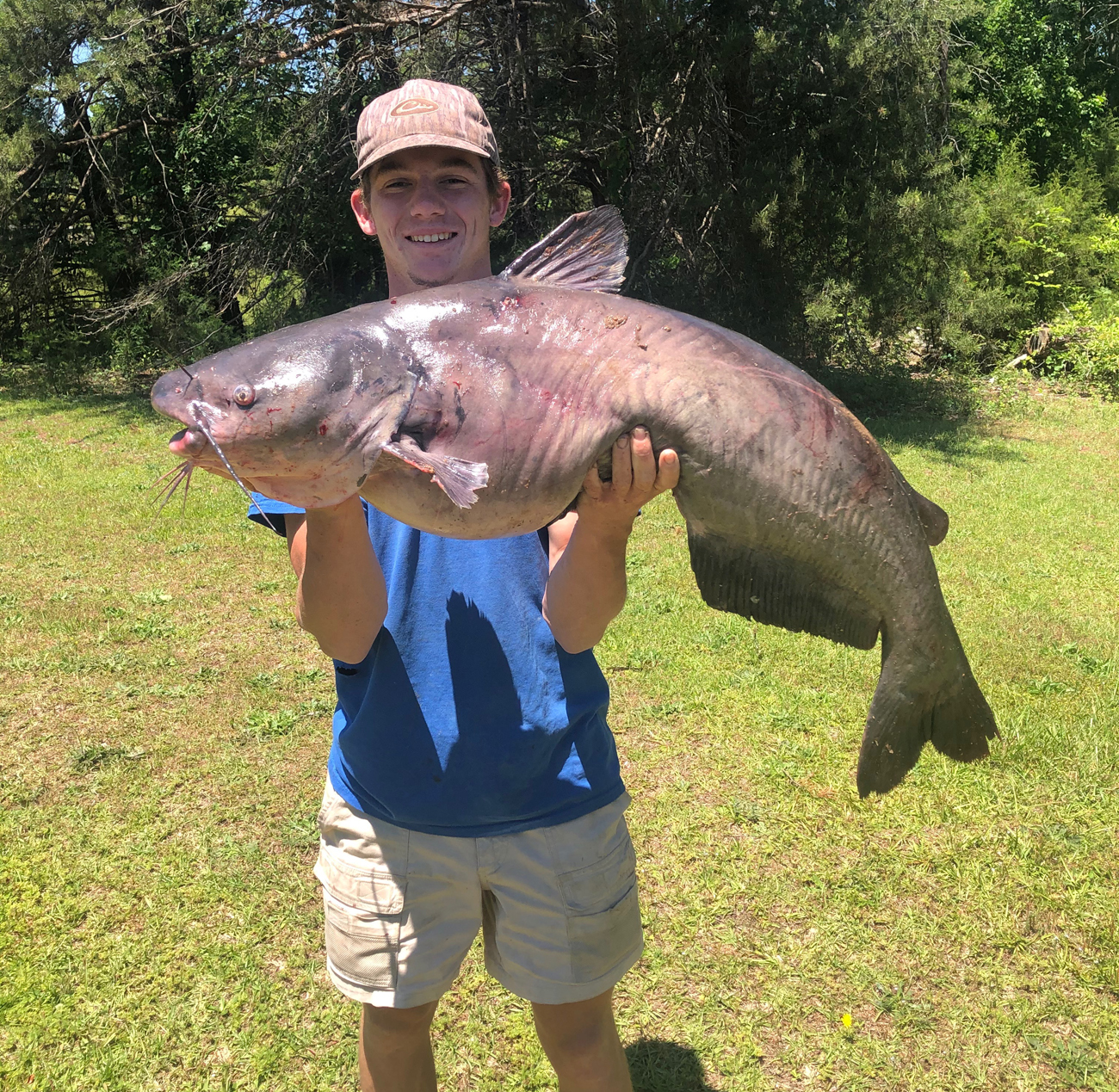 “This time of year they run really good at the dam at the tailrace,” said Chase. “They get stacked up in there, and if you have the right tackle, you can wear them out all day.”

Chase uses a Penn Squall baitcaster loaded with 80-lb. mono. He uses a 5-foot rod similar to what you’d see on an offshore boat trolling for mahi-mahi or blue marlin.

He fishes a drop-shot-style setup with a 6-oz. egg sinker at the bottom of his rig. About 7 inches up from the heavy sinker, he ties a 6/0 circle hook. He says this level of equipment and his drop-shot setup is a must for anyone looking to land a big catfish in heavy current areas.

“There’s a bunch of people who fish up there, but they don’t have the right equipment to really catch those big ones,” said Chase.

On Friday, May 1, Chase went to work for a little while and then had a break until he had to return to work at 3 p.m.

“That gave us enough time to go to the house and get all our fishing stuff and go down to the dam,” said Chase. “We got to the river about 11:30 and had to catch bait.”

Chase uses cut gizzard shad and catches them in a cast net against some rocks in the tailrace.

The first big fish to bite happened to be on Chandler’s rod. He was able to play it over toward the bank. There’s one area on the steep bank where another angler can maneuver down a set of rocks, so Chase went down a bank to get Chandler’s catfish.

“If you’re catching big fish down there, you definitely have to have somebody with you,” said Chase.

“I caught mine about five minutes after we brought his up, that following cast actually,” said Chase. “The river was a little lower, so the current wasn’t as bad as it has been, so he didn’t fight but about three minutes or so. Those bigger cats run up the river once you hook into them instead of some of those smaller ones that run down. It’s a little bit easier whenever he’s running up than running away, so it wasn’t too bad.”

This time it was Chandler’s turn to maneuver down the rocky bank to the edge of the water and retrieve his buddy’s fish. It’s the fish that would later weigh 33 1/2 pounds and be certified as the new blue catfish record on the Oconee River. It was weighed on certified scales at Duckworth Farm Supply with the store’s manager Howard Pounds as one of the witnesses.

“Howard Pounds said the last time there was a fish on that scale was Brian Estes’ fish he caught like 20 years ago,” said Chase.

The fish Chase is referring to is Brian’s Estes flathead catfish that weighed 62 pounds and currently holds the Oconee River record. It was caught in 1999.

GON spoke with Howard, and he said he’d be more than happy to weigh fish in the future for GON’s rankings. When you’re in Milledgeville, stop by and see Howard at Duckworth Farm Supply in Milledgeville, whether you have a fish or have farm or garden needs. Their address is 122 N. Elbert St., Milledgeville, Georgia 31061, and their phone number is (478) 452-2515

Although the new river record has been set at 33.5 pounds, it’s not the biggest blue catfish Chase and Chandler have seen come from the river.

“We caught one that was in the low 40s about three years ago, it was a monster,” said Chandler. “We’ve pulled them up that we thought were bigger, but once a fish gets that big and the current is bad and there’s so much commotion trying to get to it, It’s easy for stuff to go wrong.” Chandler Wooten (left) and Chase Cheely with 65 pounds worth of catfish caught in the Lake Sinclair tailrace on May 1, 2020.