As the summer heat beats down on this clear, 800-acre lake, it should drive the bass to the creek-channel ledges in droves... and at Varner, those droves are likely to be bass that are fat, healthy, and BIG. 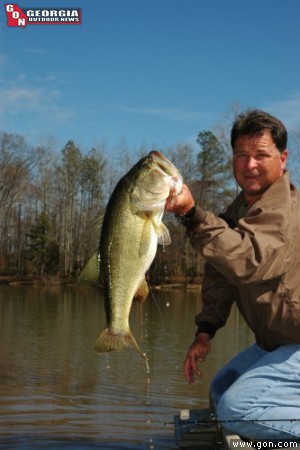 Alan Shultz of Madison with an 8-lb. largemouth and an example of why small lakes are so fun and productive for anglers.

Two things struck me as strange as we cast to the rip-rap along the bridge that crosses Lake Varner. First, there were only three other boats on the 800-acre lake, and all were fishing for crappie. Second was the size of the fish that had just swirled and missed my Bang-O-Lure.

A few casts later my topwater plug got hit again, and this time the treble hooks met fish lips and held through one good jump before releasing their grip on a bass that conservatively weighed at least 5 pounds. Next cast… another topwater strike from a good bass, and this one did make it to the jon boat for a quick photo session before we released the 4-lb. bass.

We fished the rest of the rip-rap on both sides of the bridge without another hit, and as the sun started peeking through the clouds we opted to check some creek-channel ledges for baitfish and bass.

Fishing the creek-channel ledges at Lake Varner, as well as on other water-supply reservoirs in the Atlanta suburbs, like Lake Horton in Fayette County, was something we had talked about for several years. The talk started when we heard reports of tremendous summertime catches from these lakes. Just like bass on big reservoirs such as Eufaula, the bass in these smaller lakes head for the channel ledges to beat the summer heat while still filling their bellies with shad.

I was fishing Varner last month with Alan Shultz, of Rutledge. Alan tends to be one of those guys who just catches fish, which is the help I needed since neither of us had ever fished Varner before.

We chose Varner for several reasons. We knew it had defined creek-channel ledges yet very little other structure like submerged timber. Other than a few stumps here and there, Varner’s lake bottom was stripped during construction. The other reason we chose Varner to try our summertime patterns was because of the reports we’d heard of Varner’s bass population — particularly the reports of quality bass. The May cover of GON featured a 9-lb. Varner bass caught by David Hudson, who is from Warner Robins but currently works in Atlanta. When I went to Varner to take the cover photo of David, he told me he’d never seen so many big bass on the beds. I know David — all he does is fish for monster bass, traveling the Southeast to fish the best big-bass waters. A big bass to David is pushing 10 pounds, so when that man said he’d never seen so many, I took serious notice.

Summertime ledge fishing is not the easiest way to catch bass, but it can be extremely effective.

“You need some special equipment,” Alan said. “Some type of depthfinder is a must, and a graph makes it even easier to find the ledges. Before I even start fishing I’ll spend some time graphing some ledges. The first thing I’m looking for is the baitfish. Usually in the summer that bait will be hanging close to the channels. You want to find bait that is suspended over the channel and holding pretty close to the bottom. If you find bait down close to a ledge that has a good drop, there should be some bass in there under the bait.

“Another thing I like to find is a place where the channel bends or turns. This is where you can find a bunch of good fish on one hole.”

Alan said he likes to throw a Carolina-rig first to find some bass that are biting, then he switches to a deep-diving crankbait or a heavy spinnerbait to work the area for aggressive bass while covering more water.

On our first fishing trip to Lake Varner, Alan and I saw evidence of those monster bass. We hooked and lost some good fish, and since we didn’t get them in the boat, I’m not going to try and estimate how big they were. But they were big.

We didn’t find any bass on the creek-channel ledges June 11, but there was some very unusual weather in the air. Tropical storm Allison brought low clouds, the occasional light shower, and one deluge that dumped heavy rain for an hour the day we fished. Alan did noticed a couple of things about Varner that should make it a prime summertime ledge lake — when they pull water it creates a lot of current, which will get ledge bass revved up and eating. He also noticed that the main creek channels are very defined with lips that rise up a few feet and then 6- to 7-foot drops into the channel.

Fishing channel ledges is better when it’s hot and the sun is beating down, which drives the bass and the shad down to the deeper water over the creek channels. It was comfortable and cloudy all day, so Alan and I quickly gave up on trying to catch ledge fish after no bites and after we marked more baitfish up on the flats.

What was surprising is that the rest of the day we only got hits on one bait — a Bang-O-Lure with a tail prop. Alan threw a Super Fluke, Trick Worm, jig ’n pig, crankbait, spinnerbait, a Texas-rigged worm, and a Carolina-rig (which finally did produce one small bass). We even tried other topwater lures like a Chug Bug and a Pop-R. For whatever reason, the bass at Varner that day were only interested in the Bang-O-Lure.

Other than the riprap bass, which hit well off the bank over deeper water, all of the strikes came in very shallow water in the backs of the pockets and over flats with less than a foot of water over them. We had to work hard between hits, usually casting and constantly moving for about an hour between strikes, but it seemed like every fish that did hit was a pig. Problem was, we couldn’t translate big hits into big fish in the boat. We lost some good ones that jumped in the shallow water and shook the treble hooks.

After our trip to Varner, I called the WRD Fisheries office to talk to a couple of biologists who not only have sampled and studied the bass population at Varner, but have been known to wet a line at Varner from time to time.

Senior Fisheries Biologist Bubba Mauldin said Lake Varner has developed a reputation for producing big bass in the 10 years since it was built.
“Varner has always had some nice fish,” Bubba said. “The lake record is about 16 pounds (an unofficial record since the angler didn’t want publicity), we know about a 13-plus fish (caught by a WRD Fisheries biologist), and just numerous 10-plus bass.”

For a lake that is open to the public seven days a week, Varner has shown no signs of over-harvest. And Varner is not yet showing signs of decline as it ages.

According to WRD Fisheries Biologist Scott Robinson, a new lake gets a productivity boost from nutrients leaching into the water from the soil.
“Eventually, those nutrients coming from the soil play out,” Scott said.
Scott and Bubba pointed to land-use patterns along the banks of Lake Varner as a reason that the lake still has an unusually high productivity.
According to Bubba, “The land use around Varner and the nutrients it puts in the water, and primarily we’re talking about the big cattle farms, allows the lake to produce more forage, and at the same time allows more bass to be produced. This increased productivity allows more large bass in the population, and then the population balance allows growth well enough to continually produce large fish.

The slice of topwater-bass pie that Alan and I tasted in mid-June was enough to have us shaking our heads and planning our next trip. Alan was amazed at the thickness and size of the bellies on the bass we caught, which Bubba said comes from the bass having plenty to eat.

“Varner has a very good forage population,” Bubba said. “We introduced threadfin shad, and the other primary bass forage right now is young bluegill. Unfortunately we found some gizzard shad when we sampled this spring, and that could change the dynamics of the lake.

“Gizzard shad are not what you want in a lake like that,” Bubba said. “They have the potential to greatly reduce the quality out there. Gizzard shad feed more and compete with everything at the base of the food chain, and they get to a size where they are not vulnerable to predation in a very short time — a 6-month-old gizzard shad is bigger than the biggest threadfin shad.”

Bubba said the gizzards were illegally-introduced into Varner, although he said it might have been an accident — someone fishing for hybrids with live shad who didn’t know they were putting gizzards into the lake.

Gizzards or not, for the moment Lake Varner is right. And this summer the ledge fishing should be worth a hot day spent on the water.

Lake Varner is open seven days a week from 7:00 a.m. to dark. Unless you live in Newton County, there’s a $5 parking fee for each vehicle, plus a $5 fee to launch a boat. Boats with gas motors are not allowed. It’s located near the Newton/Walton County line off Alcovy Road about five miles north of I-20.