Bass: Guide Bill Payne reports, “The fishing has been fair overall, but at times it has been good. Even when you have to grind for a few fish, it can be very rewarding. As is typical this time of year, early morning and late evening can produce a topwater bite. A more solid pattern for now is the old reliable shaky head. I like the Picasso Rhino head with a green-pumpkin finesse worm cast to the 25- to 35-foot breaklines. If you can find these areas with rock or wood cover, all the better. Also be on the lookout for surfacing fish that are pushing bait to the top. Topwater baits, big flutter spoons or swimbaits worked rapidly across the surface can get some explosive strikes. Also, topwater walking baits like the Super Spook or Reaction Innovation Vixen worked over brush or cover in the 25- to 30-foot depths can pull spotted bass up to the surface during the middle of the day. Of course, if you want to avoid all the heat, there’s night fishing. Jigs, worms, crankbaits and spinnerbaits will produce at night. Often you will find bass on some of the same places where you’ve had success in the daytime. Try slightly shallower of these areas, too. I like to work some of the steeper, rocky bluff walls with a black ChatterBait or spinnerbait at night. You may want to get in close to the bank and cast parallel to keep your bait in the strike zone for the entire cast.” Guide Eric Crowley reports, “If you’re looking for green fish, deep is still the answer. Fifty, 60, even 80 feet of water is holding spotted bass. Look for big schools of bait in those depths, and there are spots around it. They like the areas near timber and the bends in the river where the bait is congregated late in the summer. Smaller fish are usually a little shallower and can be seen busting the schools of bait, but the bigger fish are definitely going to be below them. Spoons, jigs, drop shots and a big Parker spoon will all get bit when the bite turns on. The night bite is on, and it’s one of our favorite bites of the year.”

Linesides: Guide Eric Crowley reports, “Man it’s hot. The fish are deep, and if you want to catch them, you’re gonna have to have confidence in the deep bite. Most everything except the hybrids have gone deep. Looking for fish in August really starts in 50-plus feet. The stripers have moved down below the 60- to 70-foot mark and are in relatively small schools off main-lake points and humps, as well as in the river channel. Live bait will get you a bite when you drop it in their face. Larger baits that are super fresh and frisky are key to drawing the bite. We are still catching bait with the HydroGlow lights over 70 to 100 feet of water. The hybrids have been in almost the same areas as their bigger striped cousins, but they in 45 to 55 feet of water usually between the deep fish and the shoreline. Large baits, either alewive or threadfins, are getting the attention of the bigger fish in the school. We are also having good luck with the big Parker Spoons and Capt. Mack’s u-rigs and jigs on both the striped species.”

Walleye: Guide Eric Crowley reports, “August begins the best nighttime bite to target walleye. From now until October, the fish will really feed at night more so than in the daytime. If you have never fished at night on Carters, it can be a blast.” 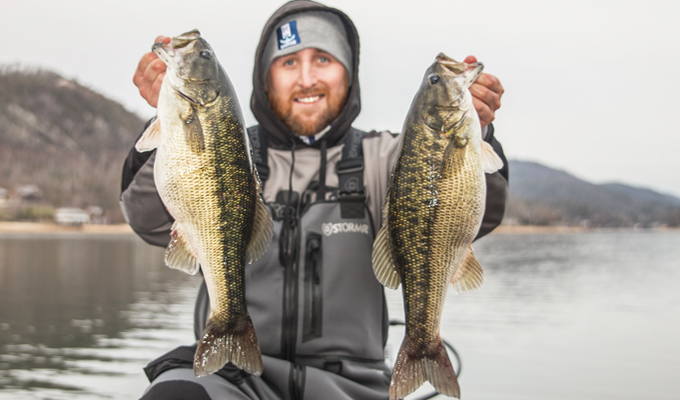