Statesboro, Ga. — The campus at Georgia Southern University looks like just about any other place where young people gather to enhance their knowledge of the world and themselves. It has a library, administration building, dorms and a shooting range. Yes, a shooting range. The world-class Shooting Sports Education Center is a part of the campus at GSU. It’s brick-and-mortar evidence that partnerships work.

The Georgia Department of Natural Resources-Wildlife Resources Division (WRD), armed with federal conservation dollars, worked with an array of other agencies to create the 30,000-square-foot facility. Partners included the university, the city of Statesboro, Easton Sports Development Foundation and the Archery Trade Association.

The shooting range has its foundations in a 2010 meeting, when then-WRD Director Dan Forster visited Michigan State University’s Demmer Center. The shooting facility was built by the university in partnership with the Michigan Department of Natural Resources. Forster was impressed.

Forster thought, “We can do this in Georgia.”

“It struck me as just being a phenomenal partnership,” says Forster.

That’s where the federal Wildlife Restoration Program came in. Authorized by the Wildlife Restoration Act, the program apportions money generated from taxes on firearms, ammunition and archery equipment to state wildlife agencies to fund conservation projects. These projects can include habitat and species management, research, hunter education, land acquisition or even facility construction. The Wildlife Restoration Program, administered by the U.S. Fish and Wildlife Service, receives project proposals and approves them to receive funds. Each apportionment covers 75% of the estimated cost. The remaining 25% must be matched. Forster was confident that WRD could find the 25% match needed to construct his vision.

His vision had a twist: He wanted the shooting facility on a campus; that would make it different than the site he visited in Michigan, which students could reach only by driving.

“Having a firearms and archery range strategically located on a college campus in Georgia would provide not only a wealth of recreational, academic and sports development opportunities for students and the community, but also had great potential for hosting regional and national competitions spanning all levels from beginners to NCAA athletes and even Olympic-level shooters,” Forster says.

But first, he had to find a university willing to take aim at his plan. Forster and others reviewed universities across the state. Which would be a good host for a shooting range? Georgia Southern University was short-listed as a high potential target. When they learned of Forster’s plans, GSU officials showed immediate interest.

After Forster’s initial meeting with leadership at GSU, the next several months were spent refining what he and the university wanted. As they planned, their vision grew in scale, size, cost and partners. In September 2015, the Shooting Sports Education Center—everyone calls it the “SSEC”—opened.

It cost $4.5 million—$3.3 million in federal funds and $1.1 million in non-federal. It is equipped with two training and seminar rooms, a 16-lane, 25-meter firing range, and a 16-lane, 25-meter archery center. All air firearms and BB guns are allowed; so are handguns .45 caliber and smaller, shotguns with slugs only, and rifles .30 caliber and smaller.

There is also a storage room in the building where students can keep their equipment. Previously, students who hunted or participated in shooting sports had nowhere to store firearms and archery equipment. The SSEC storage room offers a convenient, safe storage place.

The SSEC puts an emphasis on safety. All members must first fill out an application, complete a background check successfully and watch a safety video with a corresponding test before they are approved for membership. All ranges are also monitored while in use to ensure compliance with safety rules.

There are approximately 3,500 active members—40% are GSU students and 60% are public members. Student fees and revenue support the center, while offering student memberships at half price.

Matt Horst, the center’s director, reiterates this. “There’s finally a recreation opportunity for those who don’t run, or play basketball, etc.,” he says. The shooting facility at Georgia Southern is not the only place in Georgia where state and federal partners have put money to work. Most recently, the Wildlife Restoration Program and WRD built the Ranges at Oakfield in Thomas County. It features two skeet and trap fields, a 100-yard rifle range and a 25-yard pistol range. Two archery ranges—one static, the other 3-D—are in the works.

The Wildlife Restoration Program’s reach extends beyond Georgia, too. Across the nation, the program has formed partnerships with states and industries to provide safe, high-quality spaces for sportsmen and sportswomen to shoot.

The Georgia Southern facility paved the way for an NCAA rifle team. The GSU Women’s Rifle team calls the SSEC home and is making a name for itself in the five full school years the facility has been open. In 2019, a former rifle team member, Rosemary Kramer, scored the NCAA Championship record—599 out of 600. The record stands today.

Current GSU rifle team captain Ashley Judson has a deep appreciation for the SSEC. As a high-school freshman, Judson joined her school’s rifle team. Never having shot a gun, this was an opportunity to try something new. However, without their own shooting range, the high school improvised by converting their lunchroom to a makeshift range.

Every day after school, Judson and her team members cleaned out the lunchroom, pushed tables and chairs aside, and carefully measured the distance between their shooting line and targets—not an ideal setup, but they made it work.

“Shifting from that to the SSEC really helped my training,” says Judson. “The SSEC provided total safety and sanctuary to train.”

The SSEC is also home to the GSU Shooting Sports Club and the Southern Eagles Archery team. In the 2020-2021 school year, the archery team saw three members advance to nationals. The facility also inspired the creation of the Georgia Southern Clay Target Club Team. The 2020-2021 school year was the team’s first year of competition, and it won big—even bringing home a second place in its first national championship competition.

The facility is a “home away from home” for students, Horst thinks. “It’s a place where students can connect with people who have similar interest and build relationships,” he says. “It also offers the opportunity for students to continue an activity they love.”

Judson can attest to the bonds formed at the SSEC.

“The facility has provided the opportunity for people to experience something brand new,” Horst says. Through introductory classes, many people, students and the public, learn the basics of shooting. The center also offers shooters a chance to take their skills to new levels with intermediate and advanced classes. The Academics Afield program—a partnership with Georgia Wildlife Federation and the SSEC—even gives students the opportunity to learn how to hunt and apply their shooting skills.

“The SSEC has also provided another opportunity to serve the community,” says Sherry.

The public can take classes at the range, participate in the date-night events, or come to target practice in their free time.

While primarily a rifle marksman, Judson has taken full advantage of the opportunities afforded her by the SSEC. She’s enjoyed many of the social events but also had the chance to take an archery class.

“It was my first time learning how to properly shoot archery,” she says. “One of my favorite things was not only did we learn how to shoot, but we also talked about the importance of physical and mental health.” The SSEC is host to many archery competitions. Photo Credit: Georgia Southern University.

The center’s archery facilities have been a hit beyond the university, too. From mid-October to mid-March, the SSEC hosts competitions almost every weekend—national and regional level. In 2021, the center served as one of the sites for participants in the virtual National Field Archery Association and USA Archery national competitions. National Archery in the Schools Program, a nonprofit aimed at teaching archery from grades 4 through 12, has used the center for competitions, too.

There’s more. The SSEC is the home of the local Statesboro High School rifle team, as well as the Bulloch County 4-H archery team. Both youth shooting teams practice and host matches here. Additionally, the SSEC offers an archery program for local homeschool students. Youth can also enjoy a variety of summer camp options including outdoor archery, traditional shooting fundamentals, rifle cam, and even learning how to bowhunt and bowfish.

Horst credits the center’s staff for its success. His colleagues, he noted, created programs from scratch. “Their passion and experience are invaluable.”

As the SSEC looks to the future, they hope to explore more partnership opportunities with the Wildlife Restoration Program, state and industry partners to expand the facility with an outdoor archery park—including a 3-D archery range.

Sherry also acknowledges that partnership is what created the center.

“All those partnerships,” he says, “came together to build a truly unique facility.”

Find a shooting range constructed in partnership with the Wildlife Restoration Program by clicking here. 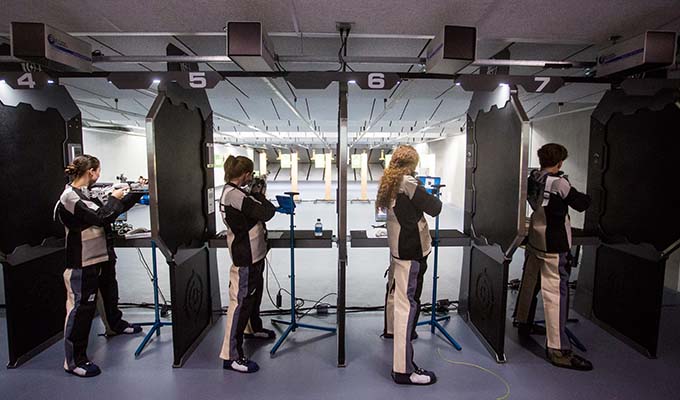