Researchers have discovered the longest distance ever recorded by an adult male white-tailed deer—close to 200 miles (300 kilometers) in just over three weeks. According to researchers, the finding has important implications for population management and the transmission of disease, especially chronic wasting disease, a fatal neurological disease.

“Deer are one of the most abundant, well-known and intensely managed species of wildlife in the United States,” said Remington Moll, assistant professor of wildlife ecology and lead author. “So, to make this discovery despite the fact that they are so well studied is pretty surprising.” 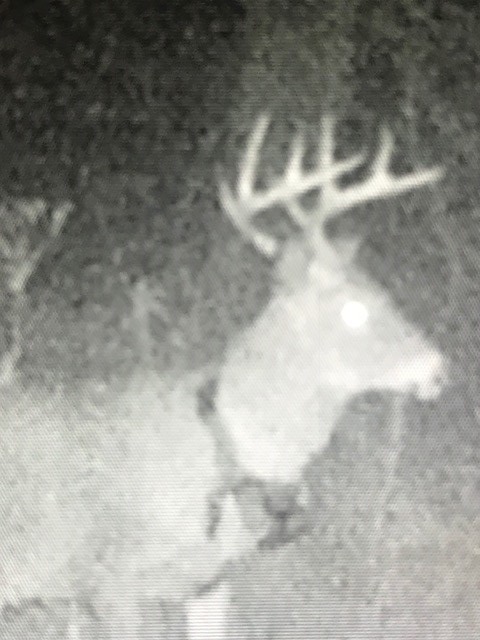 Fleeting glimpse of an adult white-tailed deer, known as N17003, that traveled the longest distance ever recorded by a UNH researcher — averaging 8 1/2 miles per day for 22 days.

In the research study by the University of New Hampshire, published in the journal Ecology and Evolution, researchers analyzed data from GPS radio collars on more than 600 deer in Missouri. One dispersal, or long-distance journey, of an adult white-tailed deer stood out for its length, duration and age of the deer. The buck traveled close to 200 miles over 22 days by moving an average of almost 8 1/2 miles per day.

The buck crossed a major river seven times, an interstate highway, a railroad and eight state highways. To confirm the findings, the researchers surveyed the scientific literature for other dispersals of white-tailed deer. The deer, known as N17003, stood head and antlers above others; his walkabout was 174 kilometers longer than any other recorded for an adult male deer.

On the evening of Nov. 25, the buck reached a forest patch where he would establish a final home range. He remained in that patch of woods until his death that summer on June 20. Evidence at the mortality site suggested the buck died of hemorrhagic disease, although scavenging and decomposition prevented confirmation as cause of death. 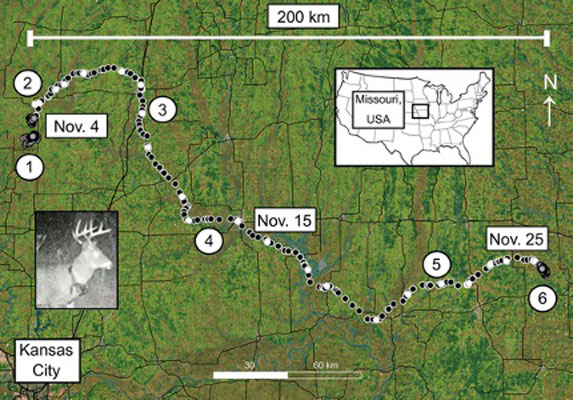 This map chronicles the multi-county journey of an adult white-tailed during the November Missouri rut. The mature buck traveling the longest distance ever recorded — more than 200 miles in just over three weeks. The home ranges and dispersal of N17003, an adult male white-tailed deer inhabiting northwestern Missouri. Numbers indicate (1) initial home ranges (gray circles, (2) an urban daytime resting/foraging site, (3) a major highway crossing, (4) a major river crossing, (5) a daytime resting/foraging site in a forest patch within an agricultural field, and (6) a final home range (gray circles). Daytime and nighttime locations are depicted as white and black circles, respectively, and black lines are major roads (primary or secondary highways).

“This extraordinary movement just jumped out from the others we tracked,” said Moll. “At first, we thought it was an error. It looks like someone took the GPS collar and drove across the state of Missouri.”

The findings were remarkable not only for the deer’s range—he roamed a distance equal to that between New York City and Baltimore—but also because unlike juvenile males, who move to seek breeding opportunities, adult males tend to stay put. Movements were faster and more directional than those in their home territory and were faster and more directional at night than during the day when the deer frequently sheltered in forest cover. The journey, which happened in November 2017, occurred during hunting season.

“We call this a rare event, but we haven’t been putting collars out for that long, and not in these large numbers,” said Moll. “It’s entirely possible that it could be happening with greater frequency than we’ve known.”

Nearly eight million Americans hunt deer which contributes more than $20 billion to the U.S. economy. The researchers say that understanding the distance deer travel and how they do it is important for managing the species and controlling chronic wasting disease, a fatal neurological disease spread by direct contact and the environment. Knowing that deer are crossing county or even state lines highlights a need for regional management coordination.

Funding for this study was provided by the Missouri Department of Conservation, the U.S. Fish and Wildlife Service and the University of Montana.