A BLAST at the GON Outdoor BLAST! Thousands of Georgia hunters and fishermen showed up clad in camo with their families in tow for the GON Outdoor Blast at the Macon Centreplex the weekend of August 10-12. What they found was plenty of fun for everyone, as hundreds of exhibitors and vendors filled the floor of the huge, air-conditioned facility to entertain, inform and offer great deals on hunting and fishing gear.

One of the highlights of the show was the Land Management Expo, where experts gave seminars and hands-on instruction, teaching hunters how to better manage their land to grow big bucks, lunker largemouths and plentiful longbeards. And, while dad was getting the low-down on planting a better food plot, the kids could be found over in the kids’ corner, where a giant inflatable slide, hunting and fishing simulators, an archery range, a Nascar simulator, a dunking booth and other activities kept them entertained.

There was also a host of seminars on outdoor cooking to go along with the Backyard BBQ Blast cooking competition. As the tempting smell of smoking meat wafted in from the parking lot, hungry showgoers got to sample some delicious dishes while learning new ways to cook wild game as well as ribs, pork, chicken and beef.

After filling up their bellies, families could take a seat to watch either of the two shooting competitions at the show. The Southern Bowhunter Classic 3-D archery tournament, hosted by Aaron’s Outdoors and Southern Woods ’N Water, was held throughout the weekend. Some of the best archers in the region shot for scores at moving wild-game targets, and won prizes ranging from cash and trophies to treestands, Mathews bows and hunting products from Whitetail Obsession. There were five different divisions for everyone from kids under 6 years of age to ladies and professional archers. More than 100 archers competed.

The GON Truck-Buck Shoot-Out arena was set up in the Coliseum, with plenty of room for spectators to cheer on their favorite shooters Saturday and Sunday, as they competed with air rifles in a tension-filled shoot-out for a brand new Chevy pickup from John Megel Chevrolet (see page 52 for complete coverage of the Shoot-Out).

Another crowd pleaser was the Georgia Taxidermy Association (GTA) exhibit. The GTA’s Summer Show and competition were held in conjunction with the Blast, and all the taxidermists competing had their work displayed in a large centrally located booth on the floor of the show.

The GONetwork was very busy during the Blast, raising money and giving away great prizes. More than $2,500 were raised with raffles of a new smoker from Bubba Grills and a shotgun. Mike Crisp of Buckhead took home the shotgun, while Donna Scott of Stockbridge needed a forklift to get her new smoker out of the Centreplex.

The drawings for the GONetwork To Win Big-Buck Contest and the SEEDS Big-Buck Contest were held at a banquet Saturday evening in the Centreplex. Clint Strange of Macon, after winning the District 18 slot in the drawing with his buck, won the drawing for a brand-new Chevy Colorado from John Megel Chevrolet. Seth (Shorty) Cason, 12, of Alapaha won the SEEDS prize drawing. His buck and some luck in the drawing earned him a hunt at Little River Plantation, as well as a compound bow, a muzzleloader, a suit of camo and some hunting boots.

Next year, the GON Outdoor Blast will be even bigger and better. The Centreplex has already been rented out August 9-11, and vendors and exhibitors are lining up to be included. This year’s favorites will be back, and new attractions are being planned. 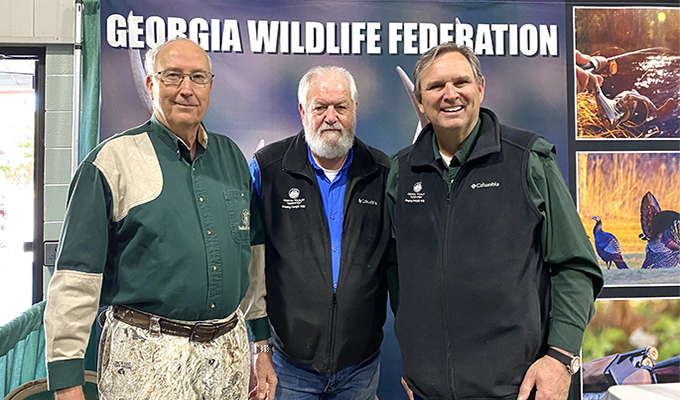 Come to Macon For A Ball At The GON Blast