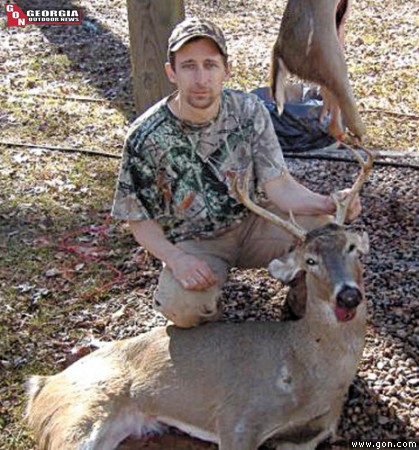 Tony Frazee of Conyers killed seven deer during the FDR hunt, including this 6-pointer shot Jan. 13 at 8:20 a.m.

Georgia’s largest state park, 9,049-acre F.D. Roosevelt State Park in Harris County, near Pine Mountain, held its first-ever hunt to control deer populations. The quota hunt, operated in conjunction with WRD, took place Jan. 13-14. Out of 150 hunters selected in the quota drawing, 105 attended the hunt, and 104 deer were killed — 78 does and 27 bucks — for a harvest of about 7.4 deer per square mile.

“We were very pleased,” said Park Manager Don McGhee of the first hunt at FDR. “Everything went real smooth. The hunters enjoyed it, and a lot of them let us know they appreciated everything that was done.”

At FDR, biologists used spotlight and camera surveys to estimate 60 deer per square mile on the park, three times as many as the habitat should support. It was found that plant species were absent on the park, while nearby Big Lazer WMA, which is hunted, had greater plant diversity and better wildlife habitat.

The Pine Mountain Trail Association opposed the hunt and disputed biologists’ findings, telling a newspaper “a more accurate estimate” of the park’s population was 12 to 14 deer per square mile.