There is accomplishment and satisfaction enough in just taking a mature buck. Doing so on public land? Now that’s another level of high-five in the deer woods.

Georgia offers some very good deer hunting on public lands, from state-managed Wildlife Management Areas (WMAs) to federal lands like national forests and national wildlife refuges. Here’s a look at some of the public-land bucks taken by GON subscribers and entered in the Truck-Buck Contest this season.

Celyon WMA Bow-Buck
Ceylon is Georgia’s newest WMA with 27,000 acres in Camden County in southeast Georgia near the coast. The area follows quality-buck regulations—legal bucks must have at least 4 points (1-inch or longer) on either antler or a 15-inch outside spread. Alex Harrelson with his 10-point buck taken with his compound bow on Ceylon WMA in Camden County.

It was during the first archery-only hunt at Ceylon this season when Waynesville’s Alex Harrelson took advantage of southeast Georgia’s early rut to get a nice 10-point buck with his compound bow during a morning hunt on Sept. 23.

“The buck came through an open stand of pines chasing a doe,” Alex said. “I had to grunt twice to get him to stop 43 yards away.”

The buck had a live-weight of 180 pounds.

Muzzleloader Buck From Oconee National Forest
Living in Monticello, Tyler Farmer is close to lots of great public land in middle Georgia. On Oct. 9 during the primitive-weapons/youth week, Tyler headed to a familiar tract in Jasper County.

“I went into this area on Oconee National Forest knowing it held some bigger deer. I’ve been blessed to harvest a few bucks out of the section,” Tyler said. “I got in there a little early waiting on daylight. I had that feeling something good was gonna happen. I was hunting an oak/pine hilltop on the edge of a pine thicket/bedding area. Around 8:40 that morning he appeared out of the thicket and came out into the white oaks. He presented me with a 65-yard broadside shot with my .45 cal CVA muzzleloader. It was a blessed day!” 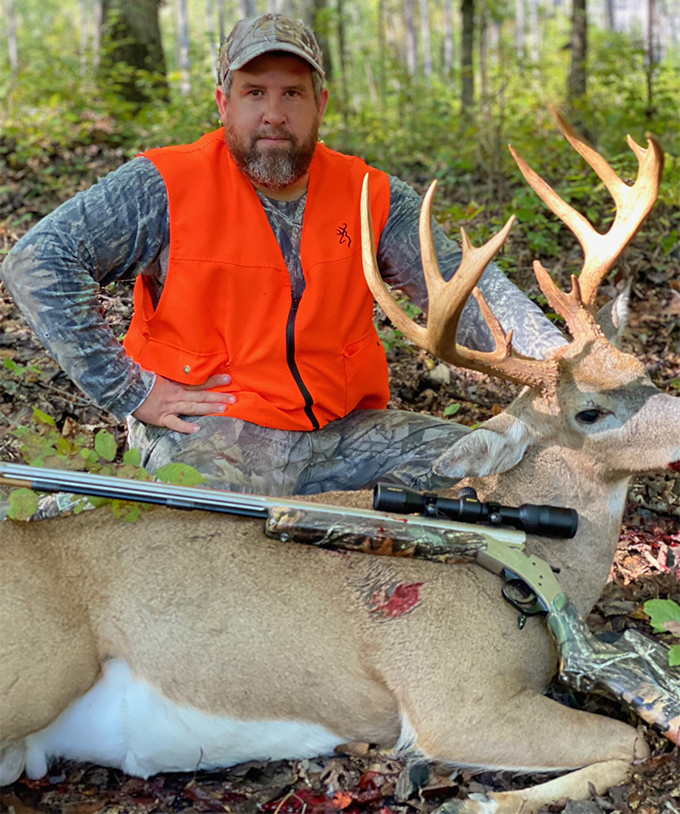 Tyler Farmer with his Oconee National Forest 12-point buck taken with a muzzleloader during Week 5.

VPA Buck… What’s A VPA?
VPA stands for Voluntary Public Access—these are generally smaller tracts of private land that the state leases using money from a federal grant program. For the 2021 hunting seasons, there are 16 VPA properties that offer some type of public hunting access, ranging from archery-only deer hunting to dove hunting.

One of those VPA tracts is the 934-acre Pleasant Valley VPA in Bartow County, which offers youth bowhunting Sept. 11 to Oct. 15, and then four quota firearms deer hunts for kids. Peyton Bowan, 14, spent Halloween evening on one of those quota gun hunts, and it paid off with a 7-point buck. Peyton and his dad were set up in a ground blind when the buck offered a 75-yard shot, and Peyton made it count.

“The deer dropped in its tracks and the celebration began,” said Petyon’s dad, Mark. “It was a memorable quota hunt. Thanks DNR!” Cedar Creek WMA Still A Deer Factory
Cedar Creek WMA is part of the Oconee National Forest, but it’s managed as a state wildlife management area, which means it has special regulations and more limited days of deer hunting. The mid-November firearms hunt this season was Nov. 11-13, which hit about just right for the peak of the rut in this part of middle Georgia. Cedar Creek is in Jones, Jasper and Putnam counties. 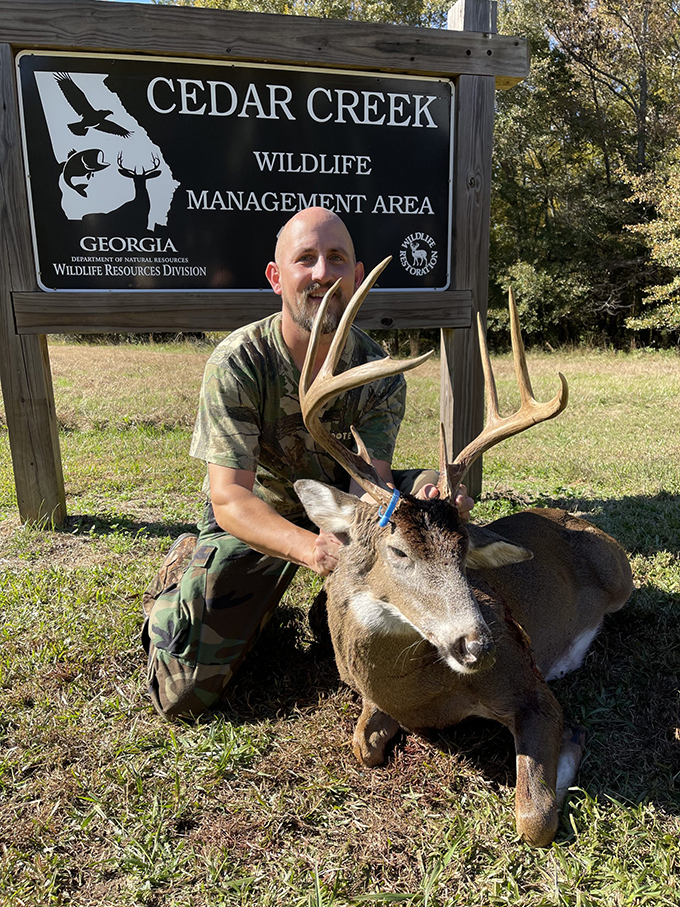 Eric Viars traveled down from Dalton for the November Cedar Creek WMA firearms hunt. Eric stayed in the stand late and got a shot at this 9-point buck at 11:30 a.m. on Nov. 12. 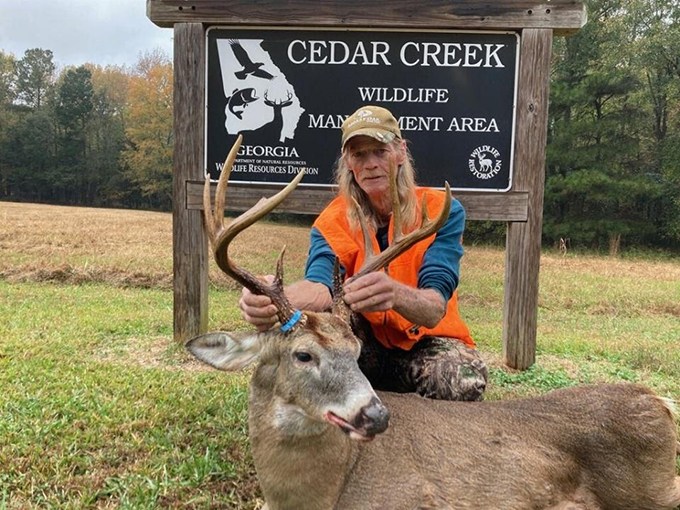 Keith Phelps, of Madison, with a 9-pointer he killed on Nov. 11 at 7:57 a.m., the first day of the three-day November firearms deer hunt at Cedar Creek.

Quality-Managed B.F. Grant WMA Produces 12-Point Buck
Greg Williams ignored the timber-cutting operations going on in the area while he was hunting B.F. Grant WMA, and apparently a buck ignored the machinery, as well. During a quota firearms hunt on Nov. 6, Greg shot a nice 12-point buck on the Putnam County WMA that is owned by UGA. “I’d been hunting the area for three days,” Greg said. “They had been pulpwood cutting in the area with machinery, but I figured I would give it one last try in the area. I knew there were big bucks in the area. At 6 p.m. the buck came up to cross the little field by the clearcut and the machinery, and I shot him 70 yards from the wood-cutting equipment.”

Flint River WMA In The Heart Of Big-Buck County
Dooly County and the Flint River corridor have long held special esteem when it comes to producing quality Georgia bucks. Flint River WMA is in the heart of it.

On Nov. 19, Jeff Horton was drawn for the quota firearms hunt on the WMA, and he went home to Clyo with plenty of meat and a nice rack. Jeff killed a 224-lb. (live weight) 10-point buck. “On the second day of a three-day hunt at Flint River WMA, at 7:05 a.m. a doe came out, and behind her this buck came out a minute or two later,” Jeff said. “He started to trot away, and I stopped him with a mouth call. When he stopped, he presented me with a shot 50 yards away.”

These are just a handful of the nice public-land bucks taken this season. See all the bucks entered in the Truck-Buck contest, where bucks can be sorted by county and week of the season.