The Legend Of The Stone Cross

Special hunting dogs deserve special spots—both as finally resting places and in our memories and hearts. I don’t know who said it first, but memory is the paradise from which we cannot be expelled. I vividly remember my first pair of hunting boots, my first shotgun and my first deer, but most of all I remember my first dog. She was a great gal. Just ask any dog lover, and they’ll tell story upon story of the good ol’ days and about their favorite dog. Dogs, like people, have unique personalities, strengths and weaknesses. I have owned several, some were better than others; nevertheless, I loved them all.

One of my favorite dogs was a blond Cocker Spaniel. She would enthusiastically meet me as I came home from grammar school each day. There was an unexplained chemistry that allowed us to understand each other. Because dogs can’t talk, they judge us by what we are rather than what we say. Samantha knew my thoughts and emotions. When I was sad, hurt, anxious or just needed picking up, she could sense it. Sam always possessed that uncanny knack of making things OK. Some of her unforgettable attributes were a humble spirit, breathtaking eyes and a compassionate heart. Well, enough about Sam. Drag up a rocking chair and allow me to recount the story of an ol’ stone cross.

The first time that I saw it was the autumn of 1966. I was just five years old. While walking on the edge of a field by the woods with my grandfather, I asked, “What’s that pile of rocks for?” Grandpa said, “That’s the spot where Sally is buried.”

Before he could continue, my mind raced. Since I knew Grandpa was a good man who by no means ever passed up a chance to help someone less fortunate than himself, I pictured an ugly old lady who died and did not have money for a proper burial. As Grandpa’s smoky blue eyes clouded with tears, slowly he began to speak with the presence and the authority of an angel.

“It was a cold November mornin’, and your Uncle Thurston came early. You see, he was a mailman and knew where every dirt road and every covey of quail were in Toombs County. I was outside gatherin’ eggs, and Bessie was inside cooking breakfast; you know, sausage, biscuits, grits and fresh eggs. The mornin’ started out routine, just like so many had. After I wiped the cane syrup rinderin’s from the corners of my mouth and washed my hands, I grabbed my Model 12 and started out to the car shelter. Shells were scarce, but your Uncle T. brought two boxes. Before we got to the dog pen, he asked, ‘Who we huntin’?

“I said ‘Sport, Sally and Rosie’. Well, your Uncle T. was a little put out that I was even still feedin’ Sport, much less tryin’ to hunt ’im. He was a great big dog: a male, liver pointer with a head as big as a Buster-Brown shoe box. The only problem was that huge head of his was empty.” (During the Depression most hunters would not have fed Sport, but Grandpa was an animal lover, and he was too tenderhearted to let him go.)

Grandpa went on, “Sally, on the other hand, was perfect, the matriarch of all huntin’ dogs. She could hunt lead, back, hunt dead; shucks boy, she could do anything. She was a gorgeous lemon pointer with a famous nose, and a gigantic heart; by far the best dog I’ve ever owned. Oh, she was smart! My other dog Rosie was a Llewellyn Setter. She would hunt tight, and that would keep my Sally dog in just close enough to keep up with her. Sal always felt responsible for helpin’ train my less experienced dogs… That Sally was a jewel… Boy, she was perfect!

“Anyhow, where was I? Following the first covey rise, we shot five times and had four birds: three hens and a rooster. After going two-for-three on single birds, we were off to this field to look for more. Roughly ’bout the middle of the field over there, Sally got birdie and started windin’ toward the branch line. As she came closer to the birds, Rosie caught on, but Sport never did. While we worked our way through the wiregrass, Sally went under a fallen tree, crept another 12 yards, and locked down to a beautiful point. Your Uncle T. went to my right, and got around the root end as I climbed over the middle of the tree. ’Bout half way over I lost my balance and fell face first on the other side. When I hit my gun went off and flushed the covey. Thurston got off two quick shots. He killed the first bird that he shot at, but the others got away. By the time I got up, brushed off, and picked up my gun, I saw that I had accidentally shot Sally. She was bleeding to death with a bird in her mouth. As she dragged up, broken… using only her front legs… she dropped the bird at my feet and looked up at me as if she were asking my permission to die. Son, when I knelt down to see ’bout her, she just gently licked my hand and took her last breath.”

The morning Grandpa told me this story, he was wearing the same brand of overalls that he had always worn, the same shirt and the same boots; in fact he even smelled the same, yet some- thing was different. Somehow, that day, I connected with him. Despite the fact that I did not know Sally, we both sat beside that rock pile and cried. Something about his story seemed strangely familiar. That was the most profound 15 minutes I would ever share with him. Perhaps, one day, I will have a grandson of my own and return to this sacred place. I too will let him discover that pile of rocks, and share with him the lessons of obedience, forgiveness and unconditional love that lie beneath that magnificent stone cross. 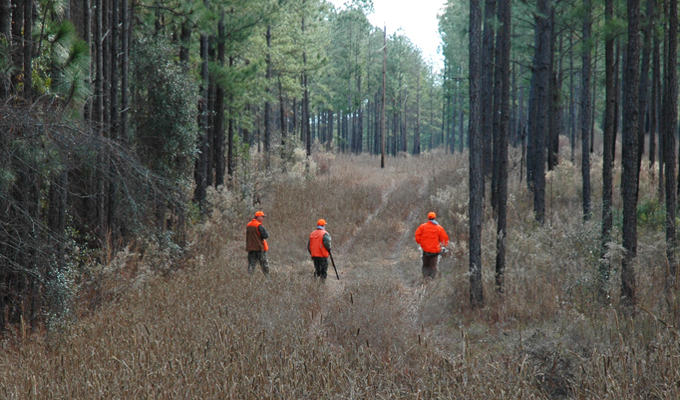