The annual one-day bear hunt on private lands in Houston, Twiggs, Bleckley and Bibb counties was held on Dec. 18, and this year six bears were brought to the Oaky Woods check station.

New for 2021, Bleckley County was added to the list of bear hunting counties, so now bear hunting is allowed on the one-day hunt in four middle Georgia counties. Bleckley County borders a section of Ocmulgee WMA that has a good population of bears. Bear hunting is not allowed on Ocmulgee or Oaky Woods WMAs. Most bear kills during the hunts have come from Twiggs County, with some from Houston County. Only one bear has come from Bibb County on previous hunts.

The morning was very warm for December with the morning temperature in the low 60s, which should have had the bears moving all day. However, the day started off slow for Jackson White, 14, on Whiteway Plantation in Twiggs County. At about 9 a.m. he got down from his stand and started slipping around. He stalked up on a bear and shot him with a 6.5 Creedmoor. He got on his phone to let his dad, Paul White, know that his hunt was over and a bear was on the ground. Jackson is in the 8th grade at Beckley County Middle School. Another hunter got lucky that morning, and it was Wade Hall, of Eastman, who dropped a 132-lb. sow. He was hunting on property known as Bear Creek near the corner of Highway 96 and 87/129, known as the Cochran Short Route. Wade works for Stuckey Timberlands, who owns the property he was hunting. Wade was hunting with an antique Winchester model 86 that was made in 1893 and has an octagon barrel. It was chambered for .45/90 ammo, but he converted it to a .45/70.

He got into his stand before daylight and soon a wild pig walked by, but he didn’t want to ruin his chance for a bear, so he let it walk on by.

Soon after, he heard an animal walking on the leaves, and lo and behold, it was a bear! It was 7:12 a.m. when he dropped the hammer on the bear. He was very thankful for the opportunity to take a bear in middle Georgia, and said he was “One and done” and probably won’t bear hunt again since bears are a very limited natural resource in the area. Wade Hall, of Eastman, harvested this 132-lb. female bear in Twiggs County with his antique rifle in 45/70 caliber with an octagon barrel.

Another hunter, Chris Bryson, of Sandy Springs, saw a bear quartering away from him and drilled it with his .270 Winchester. He took his first bear at 3:49 p.m. at 125 yards. Mel Adamson got lucky and nailed this 131-lb. sow from Houston County.

Corey Dopson, of Macon, who works at Chancy Auto in Perry, is not a quitter. He shot at a good bear last year as it crossed a powerline, and he missed. He’s had a year to think about it and has been anxious to get another chance at a bear this year from the same spot. He got on the stand early, and many hours later, at 4:49 p.m., a bear walked out, and the moment of redemption was at hand. He put a .308 slug through the bear and was soon holding onto his 192-lb. sow. He said a bear rug was in his future plans. Corey Dopson was hunting a powerline  in Houston County when he dropped this 192-lb. sow with his 308.

Another late-afternoon sow was harvested by John Madge and his 9-year-old son Gus in Twiggs County. John learned how to hunt from his dad, Ian, and was grateful for the opportunity to take his son Gus along with him. They were thankful for the help of Tony Jones and Ron Crow, who helped find the bear just before a heavy rain hit the area. John Madge, of Atlanta, and his son Gus harvested this 137-lb. sow bear in Twiggs County.

Hunters can’t legally hunt bears within 200 yards of bait. Georgia DNR Rangers strictly enforce this regulation. If you kill a bear on this hunt, you can be helpful by providing a GPS location of the kill site, and you may be asked to possibly escort rangers to that location.

This year, Conservation Rangers Stillwell, Fisher, Burns and Hurley worked the hunt and were treated to some of Tommy Shover’s world-famous chili at lunch time at the Oaky Woods check station. Tommy is the new area manager of Ocmulgee WMA and does a great job of managing the hunts.

Also present at the check station was Dr. Rosmarie Kelly with the Georgia Department of Public Health. She was searching bears for ticks as part of her research on the types of ticks that are in Georgia.

WRD Biologist Bobby Bond says the middle Georgia bear population, estimated to be around 300 bears or slightly higher, is probably the smallest bear population where hunting is allowed in the USA.

Prior research done by Dr. Mike Hooker has determined that no more than 11 bear sows should be taken from the population in any single year in middle Georgia or the population could decline, thus hunting this small population is a delicate balance. This 11-bear sow loss includes all sow losses, whether from hunter harvest, road-kills or other loses. In 2021, there were 19 known road-kills, mostly males, but adding this year’s hunter harvest of six bears, makes it a substantial yearly harvest of 25 total bears that DNR will monitor.

Although the bear study ended in 2015, Mike Hooker’s Population Viability Analysis report was not completed until 2018. Bobby said DNR plans on doing a hair-snare survey in the near future that will look at middle Georgia DNA again. Previous research showed the middle Georgia bear population is heavily inbred, which could have adverse impacts on the future well being of the population. Research has already shown that some middle Georgia male bears (8%) have issues with their testicles not descending properly, possibly affecting their ability to reproduce. The possibility of transferring some male bears from either south or north Georgia, which have larger and stronger populations, has been discussed as a partial remedy for this inbreeding issue. 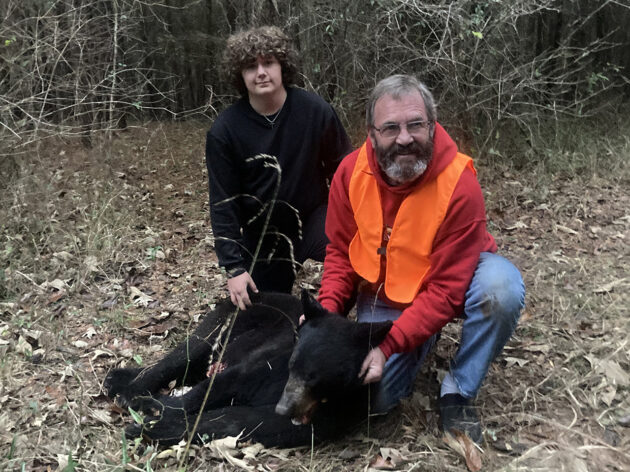