Return To Cohutta For Grouse Grouse hunter Monte Seehorn and his Brittany Babe on a Cohutta WMA roadside.

Monte’s Brittany Spaniel was getting birdy. As we watched from a Forest Service road, the dog worked the grown-up clearcut on the steep bank above us, her short tail wagging furiously. The dog crossed the slope, then turned back.

“That’s unusual for her to back-track,” said Monte. “There’s a bird up there somewhere.”

On December 14, Monte Seehorn, a retired U.S. Forest Service fisheries biologist and one of Georgia’s premier grouse hunters, and I were high in the eastern end of the Cohutta Mountains, hunting for Georgia’s most difficult-to-hunt game bird, the ruffed grouse.

This was a return trip. Monte and I had hunted the same area together in January 1988 for another GON article. Sixteen years earlier, we had hunted behind Monte’s Brittanys Patch and Bear. Last month, we hunted behind Patch’s nine-year-old granddaughter, Sugar Babe.

Babe continued to traverse the slope, tail still wagging excitedly, climbing higher on an extremely steep, boulder-strewn mountainside. Babe wore a beeper collar. The device beeps at long intervals so long as the dog is moving. If the dog stops, the beeps increase in frequency. Finally, at the very top of the thicket, the beeps picked up in pace and became stationary.

Babe was on point.

Monte and I began the ascent, scrambling over rocks, pulling ourselves up by hanging onto small trees. I am glad that Monte is not 65 years old. I would not have been able to keep up. Monte turns 72 this month — and both his knees have been replaced.

Babe’s beeper continued to beep steadily, as we huffed and puffed up the hill, finally we could see her locked on a solid point.

A steady dog is a necessity for grouse hunting, Monte said. “Grouse are more likely than quail to flush wild than quail. I like a dog that will stop the first time it scents a bird.”

On the terrain that the Cohuttas offers, you also need a patient dog, and Babe qualifies in that category. When we finally approached her, she had been locked motionless on point for about 10 minutes.

Monte was trying to position me for the shot.

“Watch that little tangle,” he said, and as he spoke, a grouse thundered up from a tangle of grape vines in front of Babe. I wasn’t able to pick up the bird until it was tree-top high, and I snapped off a two-shot, 12-gauge salute through a screen of bare tree limbs — with no effect on the fast-flying bird.

One flush in the first half-hour of hunting, but no bird.

You need to have a hard head to hunt grouse in Georgia. Most hunters measure their success by the number of flushes per day. Killing a bird is usually an icing-on-the-cake bonus.

Monte has been hunting grouse in north Georgia and North Carolina clearcuts since the late 1960s. In the mid 80s he averaged 35 to 40 birds per season. That number has dropped by about 50 percent in recent years to around 20 birds per season. The primary reason for the drop in hunting success is the loss of suitable early-successional habitat for grouse.

When Monte and I hunted the same clearcuts back in 1988, they were about 12 years old and in their prime for grouse. Grouse need early-successional habitat that provides both cover and food on the ground, as well as overhead cover to discourage an ambush by a hawk or owl. Clearcuts younger than about six years are too thick for both grouse and hunters. And as clearcuts age beyond 15 years, they become too open. The bad news for grouse in Georgia is that there has been no commercial timber harvest on the National Forest since 1996 when litigation from environmental groups shut down timber harvest. Early-successional habitat that used to make up about 7 percent of the National Forest now makes up less than 3 percent.

In his best grouse-hunting years during the mid 1980s, Monte recorded nearly 1.5 flushes per hour. Last season, Monte averaged .75 flushes per hour of hunting effort. For the season, he killed one grouse per eight to 10 hours of hunting, or roughly one bird per two trips. To date this year, after four trips, he has not killed a bird.

“The other grouse hunters I know say about the same thing,” he said. “If the Forest Service doesn’t start cutting timber, what cuts we have will disappear. If you don’t have the early-successional habitat, it’s not going to get any better for grouse.”

In large part, Monte continues to hunt because of his dog. As Babe worked ahead of us, she would occasionally stop and look back, checking on Monte’s whereabouts.

“Okay, Babe,” he would call. Reassured, she would lope on.

“She wants to please me,” said Monte. “That’s why I keep hunting even if I don’t think I have much of a chance. I love to see her work.”

“They have as good a nose as any, they make a good house pet, and they are a retriever — more so than some pointers,” said Monte. “I doubt that I would pick up a third of the birds I shoot without the dog.”
We continued across the side of the slope in the direction the flushed bird had taken. Sometimes a bird will land within 150 yards, said Monte, or sometimes they will glide for a mile. This time, at about 150 yards we heard the whir of wing beats as we bumped a grouse, either the same bird or another.

Where we were hunting, a Forest Service road winds along the side of a mountain at about the 2,700-foot elevation. The road cuts through several old clearcuts. We walked the road until we came to the thicker cuts and then left the road, usually hiking up one side of the cut and descending on the other while Babe worked the cover.

“I don’t go up these hills because I am a masochist,” said Monte. “I’d rather walk the roads, but you have to get in here to find the birds.”
Monte wears brush-buster britches and leather gloves to ward off the briars.

Shooting at grouse is usually an up-close proposition, with most shots taken in the 10- to 20-yard range. Monte carries a 20-gauge SKB over-and-under bored skeet and improved. He usually shoots No. 8 shot.
“It doesn’t take much to bring down a grouse, only a pellet or two,” he said.

The trick is to get those few pellets to the right spot rapidly. Quick reflexes are required to kill a grouse. You can’t hesitate waiting for an open shot, this is point-and-shoot gunning in thick cover.

“If I get a glimpse of a bird, I am shooting,” said Monte.

It is not unusual to hit birds through a screen of branches or a hemlock limb.

Overall, Monte’s hunting records indicate that he kills 40 percent of the birds he shoots at, an excellent percentage.

At midday we bumped another bird that cut across the slope behind me, but in a thicket on a steep slope I couldn’t spin, get the gun up, the safety off, and find the bird in time to shoot.

Three flushes, no bird in the bag.

At about 2 p.m., we were following a small creek when Babe locked down again. But before we could close in, we heard the bird blast into the air 25 yards or so in front of the dog. Babe remained frozen on point.

“I never saw that bird,” said Monte, “but it is worth it to me to see Babe work.”

“When it’s calm, you can walk up on them sometimes. They don’t seem to mind as long as they can hear where you are, but on a windy day they can’t tell where you are so they are more wild.”

Late afternoon is a good time to be hunting, said Monte.

“The last two hours are better than the rest of the day because the birds are moving,” he said.

We tried one last cutover late in the afternoon, and Babe made as pretty a point as you’ll ever see, but we could not find the bird.

In 1988, when Monte and I hunted the same area, we flushed nine grouse, shot at four and killed none.

On our return trip in 2004, we flushed four birds, shot at one, and killed none. Typical north Georgia grouse hunting, say Monte. On the days when you actually kill a grouse in Georgia, you’ve accomplished something. 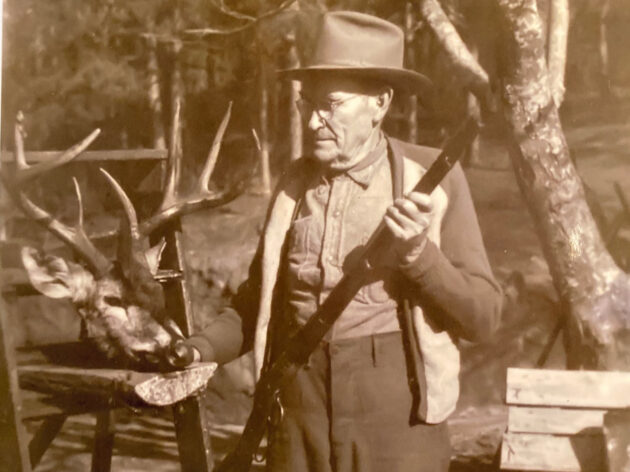