I felt a little guilty when I looked at my truck’s odometer to begin tracking my mileage for a scheduled story out of the office. My assignment was to do an article on the vast amount of WMA squirrel-hunting opportunity that is available in November while so many GON readers have deer hunting on the brain.

That was one-half of the story — the half that didn’t have me feeling so guilty.

The other part of my assignment was to pass along the message that November is a super time to introduce a kid into squirrel hunting, and WMAs provide excellent places to do just that.

This is the part where I start to feel guilty.

To show you how much fun taking a kid squirrel hunting can be, I asked my niece, Shelby Reed, to join me. Yes, I got to spend the day roaming beautiful hardwoods looking for squirrels while my 13-year-old niece from Winder stalked around in front of me with a 20 gauge loaded with high-brass No. 6s. Shelby Reed, 13, of Winder, smiles with her first two squirrels. She dropped the two bushytails on Friday, October 7, 2005 at B.F. Grant WMA.

A little history on Shelby: Eighteen months ago she’d never been hunting, fired a gun or been told the story of how hunters are the nation’s number one conservationists. Now, after passing her hunter-safety course, she’s been taught how to attach a ladder stand to a tree, shoot a .243 rifle and she even took her first deer last year. She’s been on blood trails, stomped briars behind beagles and after a few days with me she knows how to hunt and clean squirrels.

The girl has gone hunting crazy. She loves everything about hunting From eating a sausage biscuit on the way to the woods to watching quiet hillsides for game, she just eats the sport up. Why? Well, I’m not exactly sure how I got so lucky to have the opportunity to watch a young fireball hunter grow. I don’t have a secret that turns every kid on fire about hunting. All I did was take her — one time.

“I’ve actually always wanted to hunt, even before I met you,” she told me on the way to her first squirrel-hunting trip. “I just didn’t have anybody to take me.”

Before I get in trouble with my family, I need to say that Shelby has very good, caring parents. They just don’t hunt. That means I get to be the fun uncle who takes her hunting.

I decided to haul Shelby over to B.F. Grant WMA where my dad taught me to squirrel hunt 20 years ago. It was Friday, October 7, and Tropical Storm Tammy was still lingering in the clouds as leftover raindrops fell from the green leaves. With wet ground it would be an ideal morning for slip hunting. The predicted high temperature was only going to be in the 70s, so I was excited about the comfortable change in the weather.

We got out of the truck, and I walked Shelby through another quick lesson about the importance of muzzle control, and then reminded her how to load a shotgun. Then, we walked up an old logging road toward the top of a hardwood ridge. As we stepped off the road into the open, wet woods a squirrel bounced from one tree to another 10 yards in front of me. That was the only look I got at it, and Shelby never even saw it. We continued along the top of the ridge scanning the numerous white oaks and hickories that filled the landscape. Hickory-nut hulls and chewed-off, white-oak twigs scattered the wet ground, so I knew we were in a good place for squirrel hunting.

Ten minutes later I spotted a squirrel run up a big hickory branch 80 yards away. It was a quick look, but I pointed the area out to Shelby, and we went tipping toward the tree. When we got to the hickory, the gray bushytail had disappeared. For five minutes we stood with our eyes skyward. Then, I saw Shelby duck her head and look down the hill. She took a step to her left and threw the gun to her shoulder.

I never saw the bushytail until it fell off the side of a pine tree and plummeted to the ground. Shelby had her first squirrel.

If you’ve got any free time this month, I suggest you take a kid squirrel hunting on a WMA. Heck, they don’t even have to carry a gun. I know people who tote their kids just to get them away from the TV. You’ll find out that most kids enjoy walks through the pretty woods as temperatures get comfortable and the colorful leaves fall.

With deer season in full swing this month, we need to be thankful that our WMAs are so liberal to small-game hunting at times when deer hunts are not being conducted. As a general rule, when there isn’t any deer hunting going on, small-game hunting is open on WMAs. However, always check your regulations book before going hunting. When trying to find a place to hunt, I think you’ll be pleasantly surprised at all the opportunity. Last month I thumbed through the hunting regulations and saw there are some great WMAs open this month: Allatoona (November 14-December 12), Blanton Creek (November 6-December 5), Di-Lane (November 13-23), Joe Kurz (November 13-February 28) and Tuckahoe (November 6-23). That is a tiny portion of the opportunity available out there for squirrel hunting this month.

Mike Crumbley, area manager for Blanton Creek WMA, said that most of the small-game traffic he gets is on the weekends, and a lot of that is from rabbit hunters.

“I’m out there by myself typically during the week — it’s pretty slow,” said Mike. “On the weekend, squirrel hunting is still pretty light. There’s not that many squirrel hunters out there anymore. They’re all deer hunting.”

Mike has taken his own kids squirrel hunting, and he agrees that it’s a great way to spend time teaching our future hunters.

“They have a good time whether you see a squirrel or not,” said Mike. “They’re out there exploring through the woods. The kids are having a good time and getting some exercise. There’s a lot of great opportunity for it. The WMAs over here are all in the same boat. During the week, it’s pretty slow for them.”

Like Mike said, there’s light hunting pressure. To me, that’s what’s so attractive about taking a kid to a WMA on a mid-November squirrel hunt. On some days you may have an entire place to yourself. On top of that, temperatures are finally getting comfortable. Plus, squirrels are everywhere, and November is a time when brown acorns should be on the ground and the squirrels will be rustling around in the dry leaves, making them easy to find. Last month when we hunted, the squirrels were still in the trees.

Later on in the morning Shelby and I were slipping along a logging road that bordered a section of mature pines and a stand of hardwoods. Ten minutes into the stalk a squirrel started barking in the pines 100 yards away.

Excited to have a squirrel to stalk, we both crunched down and took small, quick steps down the pinestraw-filled road toward the bushytail. When we had cut the distance in half the squirrel quit barking.

“Hold on, Shelby,” I whispered.

We listened, but after 30 seconds it looked like the bushytail wasn’t going to fire back up.

“Ease into the pines, real slow — I’ll stay behind you,” I whispered.

In her sneak mode, Shelby eased about 10 feet into the pines, watching the tops of the trees as she went. Then I fell in to the woods behind her as she tipped on ahead. Once I hit a little clearing, I stopped, looked up and there was the squirrel — in the top of pine right above Shelby.

She looked at me and saw where I was pointing, and in one second she locked in and had the gun pointed toward the treetops.

Back at the truck I dropped the tailgate, grabbed a pair of game shears and a Ziploc freezer bag.

I took her first squirrel and quickly dressed the animal.

That’s not really the reaction you expect from a 13-year-old girl, but remember, she loves everything about hunting.

Slowly, she cut a hole in the hide and ran her scissors around the middle of the squirrel until she had a enough room to stick her fingers inside and pull the hide apart. Watching my niece struggle through her first field-dress attempt had me wanting to jump in to help, but I resisted. It’s a good thing I did, too. The real reward came when she finished it on her own.

She was proud of herself.

I told her she’s probably the only girl in her school class that knew how to skin a squirrel.

She was proud of that, too.

We had so much fun on our adventure that she asked to go back the next morning, and then the morning after that. Her total bushytail count for three mornings was four squirrels. After a Friday, Saturday and Sunday morning on a very popular WMA, we saw one other group of hunters.

“Now whenever she sees a squirrel when we’re driving she says, ‘I could have got that one.’ She loves to go hunting,” she said.

Take advantage of a quiet WMA and carry a youngster squirrel hunting this fall.

Turn a kid into a hunter. 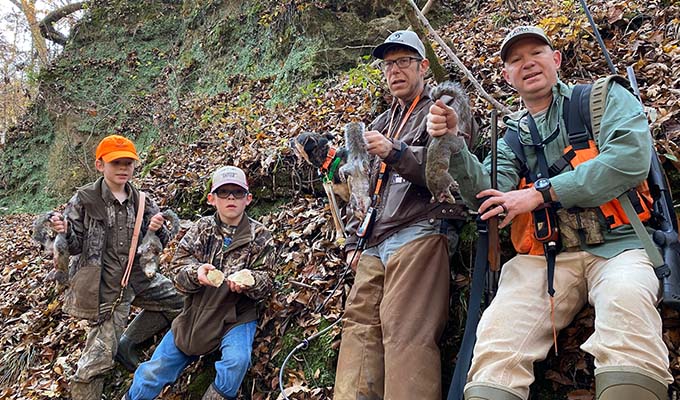