Check out the amazing beam and tine length on Jody Chance's main-frame 8-pointer, a 160-inch stunner.

As bucks from this past Georgia deer season are measured by official scorers, the Georgia Deer Records are seeing quite a few noteworthy new listings, including a new all-time bowhunting record buck from Twiggs County.

Jody Chance, of Danville, arrowed a monster 9-point buck—a main-frame 8-pointer with a 2 3/8-inch sticker—that tallied 160 6/8 total inches and netted 148 1/8. Jody said his hunt for this buck began when he got a trail-camera picture on Oct. 19. Then he hunted the buck every day until it came together the morning of Oct. 31. 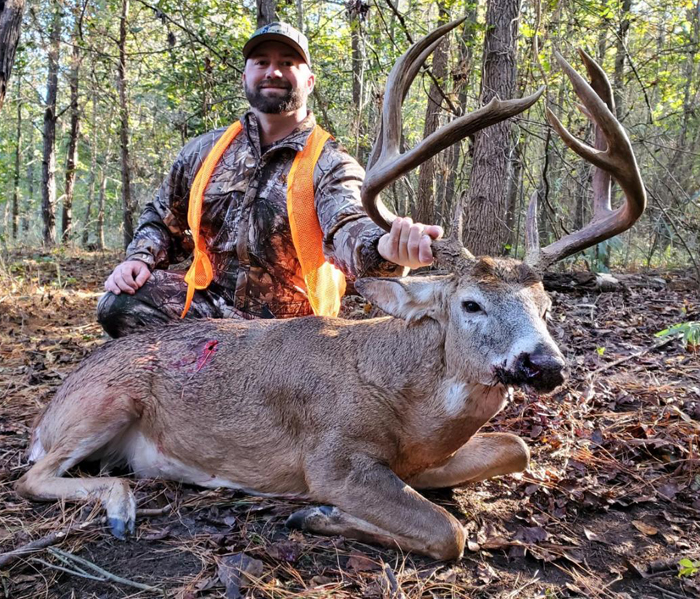 Jody Chance with his Twiggs County 9-point buck that netted 148 1/8 to set a new county bowhunting record. The main-frame 8-pointer had 160 6/8 total inches.

Jody said he leases several tracts of land, some larger tracts and also several smaller tracts, including a 100-acre tract that he hadn’t hunted for quite a while. That’s where the buck showed up.

“I killed him 2.7 miles from another block of land my buddy hunts,” Jody said. “He’s been trying to kill this buck for three years. I hadn’t hunted that little block for three years. The buck was going over there where nobody bothered him. I think he felt that comfortable on that little tract. That deer started daylighting like crazy. I moved five cameras on 100 acres, but he only showed up on one camera.”

Jody said the morning of Oct. 31 is a morning he will never forget, and not just because of the end result—killing a county record bow-buck. He said the sight of that huge buck coming toward his lock-on stand will forever be burned into his memory.

Jody said he thinks the deer was in there near his stand location when he went in before daylight.

“I saw a big-bodied deer run off,” Jody said.

At 7:30 a.m., Jody was texting some buddies in a group text when he heard what he said sounded like a horse running down the woods road toward his stand. Jody said once he started getting pictures of the buck, he was “daylighting” like crazy—showing up during hunting hours instead of at night like mature bucks are apt to do.

“I look over and a doe is running down a old roadbed in a thicket that leads to a small food plot i was in. She ran up under me, tongue hanging out, breathing hard. Then I heard a buck grunt from back the way she had come from. She took off. He grunted two or three more times, and then I finally saw him standing in the roadbed she had come down. So of course the nerves kick in. He’s trotting down the hill. My heart almost came out of my chest. I’ve killed some big deer, but I will never forget how I felt seeing that joker running down the road,” Jody said.

“This all went on in about 30 seconds. He came in the plot made a quick turn, staying on her trail, and I got a perfect shot quartering away at about 30 yards. If he had kept going straight, I never would have gotten a shot.

“At this point I knew I had just arrowed a buck of a lifetime for me. With all the nerves and the excitement going on, I just sat back down and started making phone calls to all my buddies. My first call I always make is to my dad. I always enjoy sharing the moment with him, and then of course my buddies. This will be a memory I will never forget.”

By the time Jody had waited a while to begin tracking, there was a group gathered at the property, including Jody’s son. The buck went about 120 yards. The blood trail all but stopped at 40 yards, but they finally started finding tiny little trickles every now and then that led to the buck. It was an exciting time for the entire group.

“If I would have been by myself, I probably would have shed some tears,” Jody said. “But I held it together… and that’s the first deer I’ve killed when I didn’t have to do any dragging at all.”

The buck’s main-frame 8-point rack is remarkable, particularly because of the main beam and tine length. The main beams measured 26 7/8 and 25 4/8 inches long. The G2s were 14 3/8 and 14 1/8 inches. Jody’s buck tops the previous Twiggs County bow-buck record of 135 4/8 by almost 15 inches. The previous record was a buck taken by Kerry Sowell that’s stood at the top of the Twiggs County bowhunting records since 2015.