All it took was that one duck hunt. The year was 1961, and the location was a beaver swamp behind what is now known as the Kenny Rogers estate outside of Athens, although Kenny has since sold the sprawling property.

Back then, it had a swamp. And it had ducks. Eli Ingram of Athens was about to get a taste of an outdoor pursuit that has ruined many promising young men in places like Arkansas and Mississippi, where blowing duck calls, duck dogs, and duck holes are a way of life.

In Georgia, where ducks are harder to come by and most of them squeal instead of quack, there are fewer of the afflicted, but those that are can be just as passionate about a duck as their Delta brethren.

“A group of us went,” Eli recalled. “We were big into hunting, but that was the first time we tried hunting ducks. We got started, set up some decoys someone had brought, and before long the ducks started coming in there. Boy it was something the way they came into a little hole in the bushes in there. We killed some mallards, and of course we killed some wood ducks that first morning.

At the time Eli was working at the Athens Lumber Co., where custom millwork gave Eli a knowledge of working with wood. Eli Ingram of Athens has been carving wooden duck decoys since 1961 when his first-ever duck hunt stirred a passion for waterfowl. In the beginning, Eli made the decoys for hunting, but now they are mantel pieces for collectors and DU supporters.

“I just fell in love with duck hunting that first time. I went home, and that afternoon I decided I needed some decoys of my own. And of course, back then I wasn’t making a lot of money. I needed a spread of decoys, and I didn’t have the money to buy them with, so I made my own. The first ones I made were styrofoam, and I made 12 of them that very afternoon. The idea was to use something light. Then I graduated from styrofoam to wood, and I started to make them hollow so they wouldn’t be so heavy.”

Several years later companies started producing plastic decoys that were durable, light, and more affordable. Eli stopped carving decoys to drag into the swamps and marshes, but he didnʼt stop carving. His work soon began to show up at Ducks Unlimited banquets where they were offered for auction to raise money for the conservation organization. Eliʼs wife, Harriet, looks through a photo album of different decoys that Eli has carved over the years. The scrapbook also includes pictures of ducks from magazines. All are used and reviewed each time Eli begins the process of turning a block of wood into a duck decoy that is a work of art.

A passion and commitment to DU is another result of that first duck hunt for Eli.

“Not long after that hunt, my brother and I and about 10 or 11 other guys started the Athens Chapter,” Eli said. “All of the rest of them have slowly gone by the wayside. My brother and I only two left from that original group. That was 31 years ago. Dan Denton (DU state chairman) was there then, and he showed us how to start a chapter and how to put on a dinner to raise money. Back then they told you to get one fellow from the bank, a lawyer, a couple of finance people — get folks who were connected and who would sell tickets and put the whole dinner together. We’ve been doing them the same way ever since.

“Itʼs unreal the money that has been raised, and a lot of ducks have been raised as a result, too. The thing I like the best of all about DU is that 83 cents of every dollar goes back into the ground. They donʼt waste a lot on overhead.”

Eli said his passion for waterfowl hunting that spawned his involvement with DU has kept him involved all these years.

“I love to hunt ducks. Thatʼs the main thing. I had just started duck hunting just prior to us starting that chapter. We knew with DU that we could work through conservation and habitat work to get more ducks in the flyway. It just kind of grew from there, and of course I started carving at the same time.”

Eli begins with two pieces of wood. A 2-inch by 10-inch block of bass wood will become the head of a decoy. Eli uses a band saw to cut the general shape of the neck and head, then a sander is used to round and shape the head further.

“After that it gets down to using a pocket knife, a wood-burning tool, and I use a chisel. The chisel is how you get relief — that raised appearance in places where you need it,” Eli said.

The body of the duck decoy starts out as a square block of cedar.

“Cedar works good, and I started using it mainly because itʼs available in this area,” he said.

Again, Eli starts with the band saw, then the sander to get the general shape of the birdʼs body.

“Then I do the burning and the carving. I burn the outline of the bird, all the feathers on the birdʼs back, and then use the chisel.”

After a few more steps that include using a ripper that pulls the wood down to a level surface, and then sandpaper to smooth out the rough ripper cuts, Eli is ready to attach the head to the body.

“To do that I run a dowel in the head and down into the body. That holds it together and gives it stability,” he said.

Now that Eli has wood in the shape of a duck, he has to paint them, something that takes as long as the carving.

“When they are ready to paint, I start by putting six to eight coats of primer on them. That has to dry for a couple of days, and then I can start painting. Some birds are easier to paint than others. A canvasback is very simple, but something like a wood duck can take a lot more time. Usually painting would take several nights.

“We have a photo album of birds Ive made before, and I look back at those a good bit. And every two or three issues of DU magazine Iʼll pick up a picture of a bird out of there that shows the colors good, and Iʼll keep those to look at.”

Since he began carving duck decoys more than 30 years ago, quite a lot of wood blocks have been transformed into works of art. But interestingly, you donʼt see them lining the mantel at his suburban Athens home.

“Theyʼre all gone,” Eli laughed when asked about this. “Theyʼre scattered all over the place where people have bought one or two at a DU dinner over the years. My daughter has a nice collection, and several collectors have a nice collection, but as far as me, I donʼt have any. I’ve made somewhere around 800 decoys, and honestly I personally have maybe 10 or 12 of them. I think I have one of the very first ones I made, and I donʼt know that anyone would even want to look at that one. Most of the decoys I have made have gone through Ducks Unlimited. I donate them to be auctioned at the banquets. At one time we did a 50-50 deal, but I didn’t do that long. I found it is better to go ahead and give it to them, and then DU can raise more money that way.”

Although Eli admits he doesnʼt trudge through beaver swamps to hunt ducks like he used to, he still loves waterfowl hunting.

“I occasionally get to go down to the coast. Iʼve been hunting down there for years at Darien. I never hunted Rhetts Island, but I use a guide that I met down there the first time I went about 30 years ago, and he and I have hunted together ever since. I go about twice a year down there. And I’ve been to Arkansas and I’ve been to Kentucky and Illinois.

“I goose hunted in Kentucky for years until the geese started short-stopping. Iʼve hunted geese in New Jersey and Maryland and Virginia.

“I’ve hunted all over for geese, but you know, the most geese weʼve ever killed was last year on a hunt in Oconee County. A group of us killed 22 on opening day. Corn had been planted in a field and harvested, and the geese had just been using the field unmolested. We set decoys out, and we had geese all over us! Some of the bunches were up to 40 or 50 birds, but most were three to six birds, and of course thatʼs when you kill your birds, when youʼve got those small flocks. We had a couple of callers and about eight hunters, and we just put them on the ground. That doesn’t happen but every once in a while, but we sure had a hunt to remember.”

As another waterfowl season approaches, Eli and other Georgians with “duck affliction” look forward to a memorable hunt or two. Meanwhile, Eli continues to work on his decoys. He had about a dozen in progress when we met with him. But they are not for sale. The only way to get one is at a Ducks Unlimited banquet… raising money for the ducks. 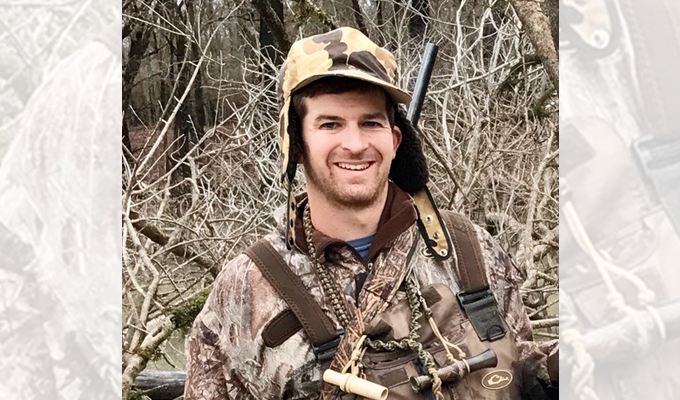