By hunting hard, these two Gilmer County hunters regularly kill big bucks where other hunters thought there were none.

From trout fishing to bear hunting, the north Georgia mountains are well known for many things — deer hunting is not one of them. But there are a couple of hunters up in Gilmer County who make mockery of the low hunter-success ratios year after year on mountain WMAs. They hold many of the top spots in our Triple-Digit WMA Bucks list from Blue Ridge, Cohutta and Rich Mountain WMAs, and it appears as if their successful hunts are responsible for many of the deer killed on these WMAs each year.

Estle Clayton, 66, of Ellijay and his hunting partner Raymond Mooney, 37, of Canton kill deer almost every year on Blue Ridge, Cohutta and Rich Mountain hunts, and they have killed 90 bucks combined from north Georgia public land since 1990. With overall hunter-success ratios of 5.6 percent, 3.5 percent and 6.9 percent on these WMAs, respectively, these two guys are very good at killing deer that are hard to kill.

“I guess we’ve got a pretty high hunter-success ratio,” Estle chuckled. “If you get out there and do your homework, you’re gonna kill your deer.” 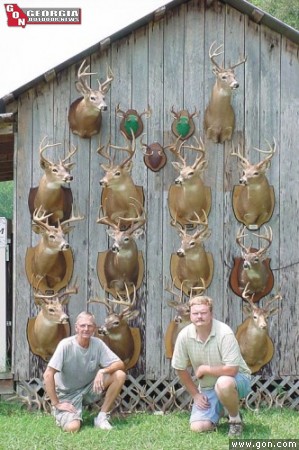 Estle Clayton and Raymond Mooney (from left) with a collection of bucks they have killed on public land in the north Georgia mountains over the last 17 years.

That’s the secret to their success. While most hunters are on their front porches complaining about the heat, Estle and Raymond are in the woods burning up shoe leather on daylight-to-dark scouting trips. They also hunt very hard when the time comes. They don’t split their hunts into morning and evening sits; they go to their spots before daylight and stay until it gets too dark to shoot. They spend about 40 days a season in the woods, whether it be on WMAs or national-forest land.

“We’ve pretty much got our routine trying to find acorns,” Raymond said, explaining their scouting tactics. “We usually start trying to determine whether the deer are up high or down low, and we find their food sources.”

Estle and Raymond have several places up on the ridges and down in the bottoms on each WMA, and they start from those spots searching for sign. They put close to 40 miles on their boots just scouting each season, and Estle guaranteed they walk at least 100 steep miles through the hills by the time the season ends on January 1.

Their hunting spots are typically 2 to 3 miles from the nearest road, much deeper in the woods than your average hunter is willing to go. They hunt from the ground on homemade sling seats, and they carry everything they might need for a day-long hunt with them. Estle with the 139 4/8-inch 8-pointer he killed deep in Cohutta. It is the best-scoring deer to come off the WMA in more than 30 years, and it took him nearly 20 years to get it.

“It’s hard work, but we love every minute of it,” Estle said. Estle demonstrates the homemade sling seat he hunts out of. It weighs 1 1/2 pounds and is made of a 9-inch-wide, 3 1/2-foot-long strip of canvas, two steel cables, two cut-down push rods from a car engine and about 20 feet of rope. A seat like this costs about $15 to make, and Estle has hunted out of his for about 20 years.

That’s the attitude he used to kill the No. 2 buck that has ever come off Cohutta WMA on November 29 last season. At about 3 a.m. that morning, Raymond and Estle unzipped the tent doors at their primitive campsight on Cohutta and began cooking a breakfast of bacon, eggs and biscuits long before the camps around them began to stir. They were on the trail by 4 a.m.

“We always cook,” Estle said. “Hunting like we do, a bowl of cereal just don’t do it.”

There were two other hunters with them that morning, and after dropping them off at their hunting spots, Estle arrived at his location late, at about 7:20 — after daylight had already broken. He tied his sling seat between two trees, made a blind from some mountain laurel around him, and hung a camouflage tarp over his head because it had already started to drizzle.

“At about 8 o’clock I got up to fix a wrinkle in the tarp because it wasn’t the way I like it,” Estle said. “As I sat back down, I looked back up the side of the mountain, and I thought I seen something move. I got out my binoculars and looked up there, but I couldn’t find nothin’. I turned and looked back down, then looked back up and I saw movement again.

“I got my binoculars back out and I seen his back end sticking out from behind a poplar tree at least 170 yards off. I said, ‘Well, that looks like a big ol’ doe.’”

With its head down, Estle thought the deer was either feeding or looking for an area to bed down. Still watching, he caught a glimpse of the buck’s right-side G2 sticking out of some thick undergrowth. The buck was up a steep incline above Estle’s position, and it was moving slowly left to right across the face of the mountain.

“I thought, ‘My goodness, that seems to be a pretty good buck,” Estle said. “He was in a bunch of tall brushy stuff at least waist high. All I could see was the top half of his body.
“I got set on the next spot he would come to that I could shoot through, and I had a good log laying there that was just right to rest my rifle on with me sitting in my seat. So I laid my rifle across it, turned my scope up to eight, and when he walked into the crosshair, I pulled the trigger.”

The shot hit high behind the buck’s shoulder and broke its back. It staggered down the mountain until it finally offered another shot at about 75 yards across a small ravine to Estle’s left. He took the shot, and the buck piled up where it was standing. Estle still hadn’t gotten a good look at the rack when he called Raymond up on the radio to tell him what had happened. Raymond was 400 or 500 yards away and heard the shots. Deep in the woods and away from roads or vehicle access, it took Estle, Raymond and two other hunters more than four hours to drag this buck back to camp.

“When I got over there, his nose was sticking straight up. He was laying back on his horns, and I thought ‘Lord, have mercy,’” Estle said. “I was speechless. When I got right up over him and saw his rack, I said, ‘Thank you, Jesus.’ You may not believe it, but I sat right down and cried. It was two minutes before I could get Raymond back on the radio.

“I said, ‘Well ol’ buddy, we have drug a lot of deer from back in these mountains, but we’ve never drug one out like this.”

With a branch lashed through the buck’s antlers, leaving enough branch for a handhold on either side, the four hunters took turns dragging the buck back to camp.

“It took us about four-and-a-half to five hours to get him back to camp,” Raymond said. “Luckily there were some others there to help us.”

While these bucks might not be considered trophies on a south Georgia deer farm, they are exceptional for wild mountain bucks, and these hunters’ names appear in the record books way too often to attribute to luck. So how do these guys do it? How do they regularly kill big mountain bucks that are known for being wily, wild and unaccustomed to the presence of humans.

First, early season scouting for food sources puts them in the area they need to be in to locate deer, as well as to notice signs of the rut when they start showing up late in bow season. By hunting hard every weekend of the season, they are able to keep an eye on the deer activity, and hopefully find a big buck to pattern and team up on. And, with no fixed stand location or tree necessary to hang a climber from, they can move as the situation dictates.

“I’ve hunted in the mountains ever since I was 13 or 14 years old. To me, it’s just a great thrill to find a good buck, pattern him, go back a week later and he’s still there if nobody has messed with him. You can’t do that on a club,” Raymond said. “Then you can take three or four days to hunt him and kill him — or at least see him. It takes long days in the woods, just sticking with him. You’ve got to pattern a mountain buck, and we’ll team up on him hunting different areas he uses.”

In order to make those long walks into the woods, they travel as light as possible, carrying the comforts they need to hunt all day but leaving behind unnecessary items. Estle’s pack generally weighs about 25 pounds and includes flashlights, a knife, extra shells, binoculars, a rain suit, a tarp, water, a meal, his sling seat and a Coleman catylitic heater when the forecast calls for very cold weather.

“If you keep your hands and face and feet warm, it don’t make no difference how cold it gets,” Estle said. “You can stay out there as long as you want.”

On the hike in they wear as little clothing as they can to avoid sweat, which smells and leads to cold, moist clothing. They carry warm outer layers with them and dress once they get to their hunting spots. The homemade sling seat, as well as being much lighter and more compact than a climbing stand, is comfortable, and Estle said there is no advantage to an elevated position when hunting on a steep incline. On a steep slope, no matter your elevation from the ground, you will still be looking down on what’s below you on the slope, and on a level plane or up at what’s above you. Estle and Raymond try to choose locations where they can see 200 or 300 yards from their seats.

“I think you’ve got the advantage on the ground because you can see under the thickets a lot better than you can see down into them,” Estle said. “You just sit back, relax, watch nature and wait for a deer to come by.”

Being on the ground also allows the hunters to build blinds out of leafy branches to conceal their movement. They use scent-eliminating sprays to keep human odor at a minimum.

“I guarantee, if you don’t move, they’ll come right up into your face,” Estle said. “I’ve had deer come right up under my rain tarp and never know I was there.”

What Estle’s and Raymond’s techniques and gear seem to boil down to is whatever is necessary to get them deep in the woods and away from other hunters, with the comforts to stay quiet and still for long hunts. Once they set up, the only thing left to worry about is how woderfully difficult it’s going to be dragging a buck all the way back out of the woods.