It's already been a Georgia deer season to remember, and it's not over yet. 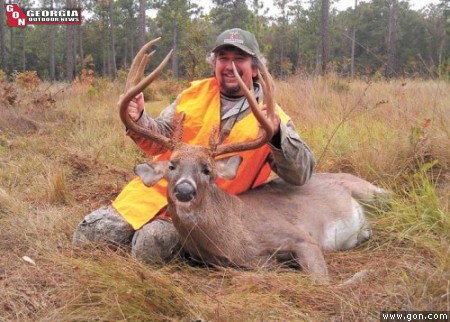 Don Vinson, of Thomasville, shot this incredible Brooks County 11-pointer on Nov. 10. The buck is entered in Week 9 of Truck-Buck, and it’s been green-scored with a net in the mid 170s. Had it not broken off half its right G4 tine, Don’s buck might have netted above 180!

This is the time of year the phones at Georgia Outdoor News ring off the hook with reports of huge bucks. Our editors, writers and hunt advisors have been busy tracking down the rumors, sniffing out the hoaxes — and putting the GON stamp of confirmation on some giants. We’ve already confirmed enough to believe we could be in the midst of one of the best seasons ever for high-scoring bucks.
Make sure to click through the images with this article. We’ve put together some superlatives — preliminary of course since the season isn’t over and the bucks haven’t been measured — that include a giant killed on a WMA, one by a youth and a huge buck taken by a lady.

Any talk about big bucks from this season has to start down in Brooks County, almost on the Florida line, where we could be looking at back-to-back Booners killed on consecutive days from the same county. We won’t know until the racks are officially measured after a 60-day drying period, but we’re confident Brooks County has produced two record-book-class bucks — an 11-pointer killed Nov. 10 and a 10-pointer on Nov. 11.

Don Vinson, of Thomasville, shot an 11-pointer on Nov. 10 that is entered in Week 9 of GON’s Truck-Buck contest. It’s been green-scored with a net in the mid 170s, and had it not broken off half its right G4 tine, Don’s buck might have netted above 180!

The next day, Nov. 11, Mike Holland, of Howey-in-the-Hills, Fla., shot a tall and wide 10-pointer that had 10 1/2-inch brow tines. Amazingly, Mike passed up a shot at the buck the season before.

“I had seen this buck last year during an afternoon hunt in an adjacent cotton field approximately 300 yards away,” Mike said. “He skirted the back side of the cotton field in plain view for five minutes, then disappeared in the pines. I watched in awe but did not take the shot because it was just simply a low-percentage shot with a .243 at 300 yards in a low light and very dense bedding area behind him. That buck was just too impressive too risk a hail Mary shot.”

They say you never get a second chance on a monster buck, but Mike did on Nov. 11, Veterans Day. It was a morning hunt on the edge of an adjacent cotton field.

“At 6:45 a.m., a doe stepped from the hardwoods and began walking the rim road between the hardwoods and cotton field straight toward me. She stopped several times looking behind her. As she neared my stand, she stopped again 10 feet away, put her nose to the ground then looked straight up at me. I was busted. I then saw the buck step onto the rim road on the edge of cotton field 100 yards away. I could see him walking toward me in a shaded area of the rim road but could not make out the rack until he stepped into the sunlight at 60 yards away, at which time I could not believe my eyes — brow tines were incredibly long with width and mass. The buck stopped and became edgy, staring in the direction of the doe that was still staring at me 10 feet away. Sitting in my stand, hands in lap, rifle to my left, I knew it had to happen fast with a doe that was sure to blow and run at my first movement. I made my move fast, left hand to rifle, doe blew and ran to hardwoods, raising my rifle. The buck took off at maximum trot into the cotton field. With only a neck shot, I squeeze off a round. He buckled hard and crashed about 40 yards into the cotton field.

“He was a big buck, there was no doubt, but walking up to him was the finale of my 35 years of hunting in the South. When I laid my eyes on him, up close and personal, with the snow-white cotton field background, for just a moment it looked like a scene from Saskatchewan, Canada, a place I always dream of hunting. Snapping out of the moment, I realized this was south Georgia, and  we grow big bucks, too.

“Adding to that special moment was that it came on Veteran’s Day, a special day to me being a prior Marine stationed in Albany in the late 80s. It was also special with my son being at camp that weekend and sharing the special moment with me. When that deer disappeared into the cotton and after looking to the sky, I thought of my good friend Lacy Fraser from Albany who once said deer hunting is a crap shoot. I knew I had just won big!”

Mike’s Brooks County buck has been green-scored with a net in the low 170s.

We are also chasing down rumors of a couple of other bucks that reportedly are Boone & Crockett class. You can expect more coverage of Georgia’s great deer season — more photos of the giants — in the January issue of Georgia Outdoor News magazine. Call (800) 438-4663 or click here (put direct link to subscription page) to order your subscription. 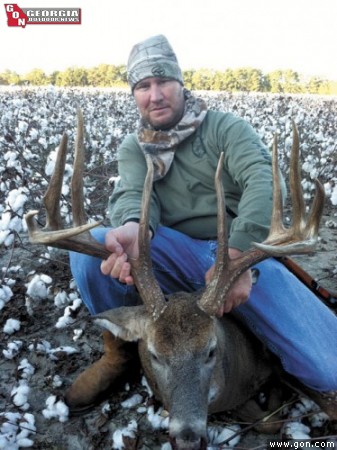 Nov. 11, Veteran’s Day, was extra special for former Marine Mike Holland when he shot this huge Brooks County buck, a buck he passed a marginal shot on last season. The buck has 10-inch brows, and it has been green-scored with a net in the low 170s. 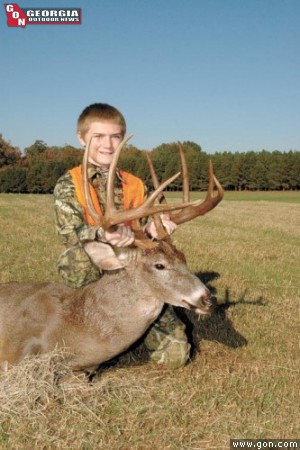 Mason Smith is just 12 years old, and look at what he’s done in the Georgia woods! Mason, of Covington, shot this 10-pointer Oct. 29 in Putnam County. This buck should net in the low 160s! There have been several great muzzleloader bucks killed this season in Georgia. Here’s one of them, a massive 13-pointer from Putnam County that was killed by Ritchie Sharian, of Lilburn. 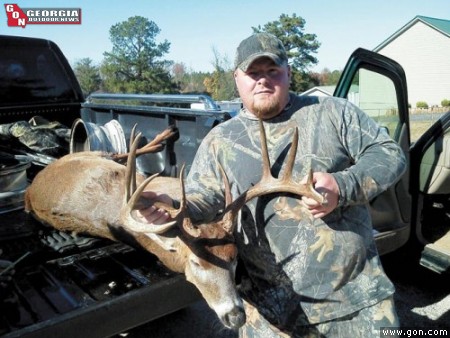 Georgia always produces dozens of record-class bucks killed by bowhunters. Here’s one of this season’s jaw-droppers taken with a bow. Chad Driver, of Carrollton, arrowed this 10-pointer in Fulton County on Nov. 19. Jodi Manders, a GON Hunt Advisor from Cordele, has one of the best bucks taken by a female in Georgia so far this season. Jodi shot her big 17-pointer Nov. 10 in Crisp County.