For these record-class bucks, it’s not the number of points, it’s the jaw-dropping tine and beam length.

However, there’s an old adage often quoted regarding hunting and fishing activities…

The following week, Jeff and his son Dylan were checking recent trail-camera photos taken at another hunting tract in Crisp County. A couple of the images literally took their breath away.

“We had photos of a buck that was unlike anything I had ever seen,” Jeff said. “The deer’s body size and antler tine length were hard to comprehend, particularly in our area.” The Crisp County 8-point buck killed by Jeff Davis last season quickly became legendary among Georgia deer hunters. Never before had Georgia produced an 8-point buck of this caliber. With 30-inch main beams, tines that measured 15 and 14 inches and a 20-inch spread, the rack totaled 172 2/8 inches and amassed a net score of 166 5/8.

With the rut in full swing, there wasn’t much doubt that was the contributing factor behind the big deer suddenly appearing on the property. And there was no guarantee the buck hadn’t continued on to another area.

“In terms of acreage, the tract is not very large,” Jeff noted. “I knew we needed to act quickly to have any chance at all of seeing the buck.”

A couple of mornings later, well before dawn, Jeff and his son arrived at the hunt location. Two stands were already positioned on the site, and Jeff allowed Dylan his choice of either stand.

“He decided to hunt the stand nearest the trail camera,” Jeff said. “To be honest, that is probably the stand I would have picked had I been in his place. After getting him situated, I took a circular route around to the other stand.”

The hunters were located about 75 yards apart in a wide strip of hardwoods and mixed-age pines. Agricultural fields flanked both sides of the timber. The weather was cool and clear, with no wind.

“At daybreak, I could hear deer moving in the woods around me and an occasional distant grunt,” Jeff said. “The first deer I saw was a young 8-pointer that moved quickly by the stand. A short while later, around 8:30, a doe abruptly appeared about 45 yards away. After several seconds, she slowly eased forward a few yards into a slightly more open area, and as she did, I heard a deep grunt from somewhere behind her. At that point, I picked up my rifle.”

As the hunter continued to sit and watch, he eventually saw a small portion of the buck’s body move into view. However, he still had no idea of the deer’s size.

“Suddenly, for no apparent reason, the doe became very alert and began to stomp her foot,” he said. “I couldn’t believe she was about to blow out of there and probably wipe out the entire morning. Luckily, that didn’t happen. After finally calming down, she began to very slowly take a few more steps, and at that point I saw the buck begin to move.”

The understory within that particular section of woods included a mixture of small sapling thickets and partially open areas. Once the buck began to walk, Jeff continued to watch through his scope, hoping to get a glimpse of antlers.

“Finally, I was able to see a small part of one side of the rack, which included a very long back tine,” Jeff said. “For me, that positively identified the buck as the big deer in our photos, and from then on, my total concentration was making sure I had a clear shot.”

Seconds later, as the buck paused momentarily in a narrow opening, Jeff squeezed the trigger. At the shot, the giant deer instantly crashed to the ground.

“I briefly stayed in the stand, just to make sure there was no further movement,” he said. “After walking to where the deer had fallen and getting my first up-close view of the giant 8-point rack, I was really at a loss for words.”

At about this same time, Dylan contacted Jeff to inquire about the shot. While the young hunter was understandably disappointed to learn his chance of encountering the huge buck had ended, he was nevertheless happy for his dad.

Initially, some hunters might question making a big deal over a buck that has only 8 points. After all, in today’s world, whether the subject is trophy deer or a sporting event, the higher the number, the better. However, very few hunters have ever seen an 8-pointer in the size class of the buck Jeff took last season. To put that statement in perspective, consider the following official antler measurements of Jeff’s Amazing Eight: exceptionally long 30-inch main beams, G-2 tines that measure 15 and 14 inches, and an inside spread that exceeds 20 inches.

In regard to scoring, the 4×4 frame grosses a remarkable 172 2/8 and nets, following minor asymmetry deductions, a final Boone & Crockett score of 166 5/8. This ranks Jeff’s buck as the biggest Georgia 8-pointer ever killed and recorded with an official score.

The Crisp County giant tops a very short list that includes five additional Georgia 8-pointers with final scores exceeding the 160 mark. Moving down to the No. 2 slot on the list, scoring 165 5/8, is a Sumter County buck taken during the 1989 season by Heath Bass, who was only 17 at the time. Heath’s buck has an incredible inside spread of 23 3/8 inches. Georgia’s No. 2 main-frame 8-pointer ever was this 1989 Sumter County buck killed by then 17-year-old Heath Bass.

Technically, the racks of both the Sumter and Ben Hill bucks include an additional typical point, barely over an inch long. However, during the scoring process, these points are initially added in, but because each is unmatched on the opposite beam, they are deducted for lack of symmetry. This is essentially as though the points never existed, for net-score purposes. Therefore, the final scores represent only a 4×4 typical frame.

In 2007, Scott McGuinty took the No. 4 scoring Amazing Eight, a buck that netted 162 5/8, while hunting in Wilcox County. The near perfect 4×4 frame of Scott’s buck has less than 2 inches of deductions. 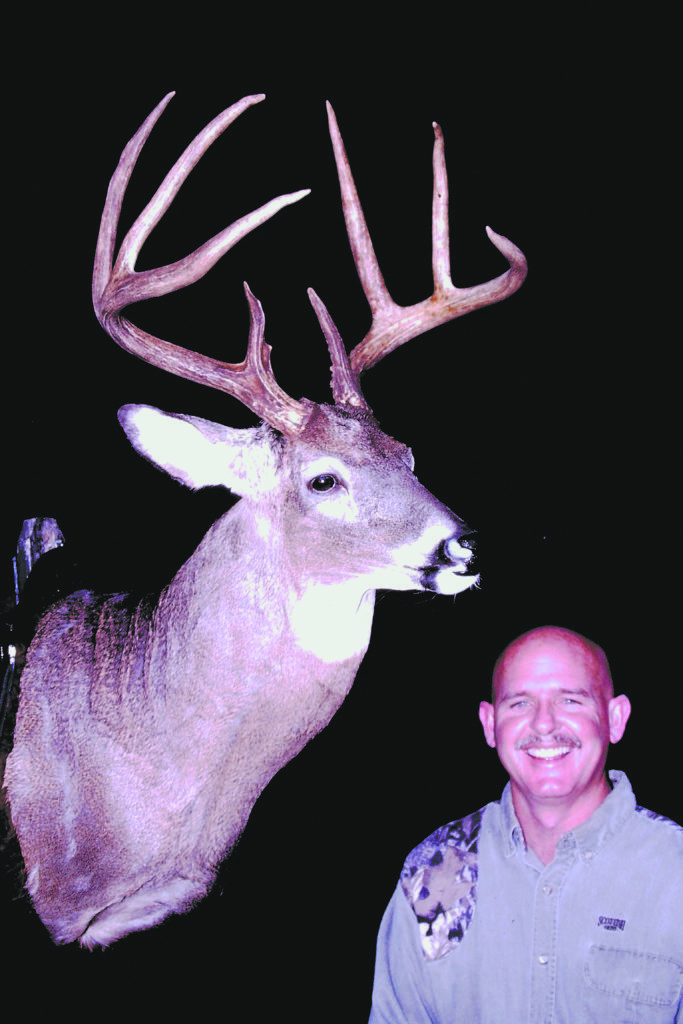 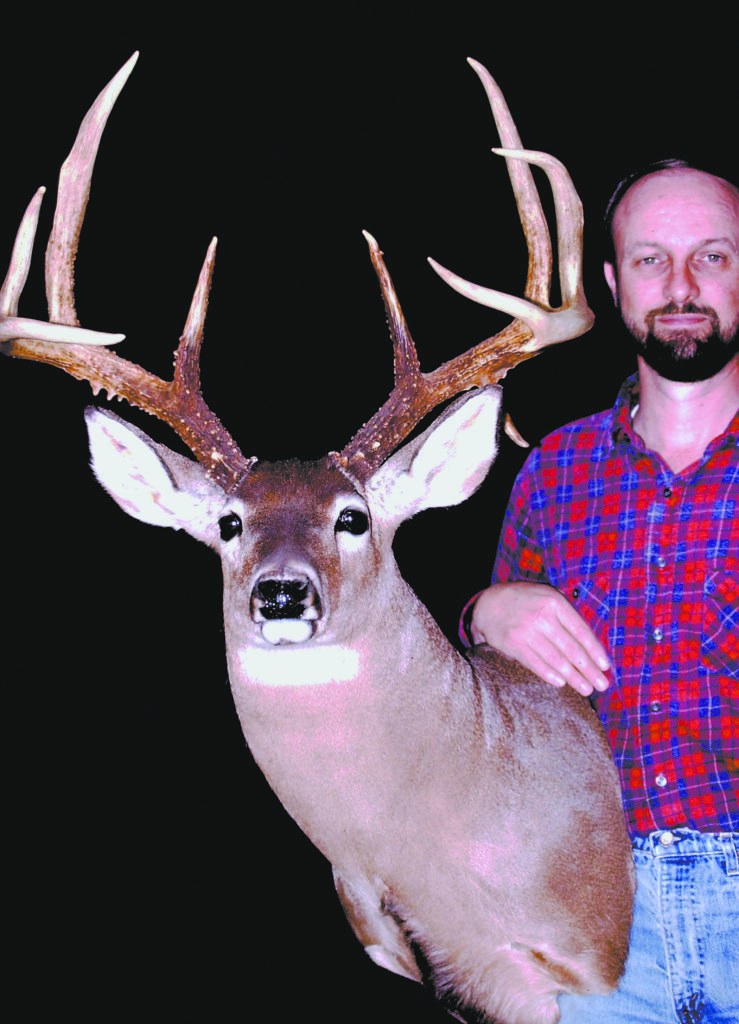 The simple fact that only six of these exceptional bucks have been taken in more than 60 years of Georgia deer hunting puts a perspective on how difficult it is to encounter an 8-pointer of this caliber that cracks the 160-class mark. Several factors influence this degree of difficulty, but one of the main reasons is the limited amount of measurable antler growth in a typical 8-point rack. This translates directly to the number of antler points. While beam tips count as points, they are measured only as a portion of the beam length. Therefore an 8-point rack has only six measurable tines that contribute to the final score. By way of comparison, a 10-point rack would have eight measurable points and a 12-point rack would have 10.

For any rack to qualify for the record book, a good rule of thumb is that it should have close to 66 inches of tine length after asymmetry deductions. It can have less, but the difference will need to be made up in spread, mass or beam length. For an 8-pointer, this means the six tines would need to average 11 inches each. However, a 10-pointer would need to average only 8 1/4 inches per tine, and a 12-pointer only 6 1/2 inches each. Therefore it’s not hard to understand why most record-book bucks have 10 points or more. In this vintage photo, outdoor writer Duncan Dobie holds the sheds of perhaps Georgia’s greatest main-frame 8-pointer ever. Guessing an inside spread of 20 inches, the Jones County sheds, found in the 1960s, tally a gross score of more than 180 inches and would have likely netted above 170.

As a case in point, consider a massive antlered buck taken by Brian Gordon in Crisp County during the 1991 season. The typical 4×4 frame netted a score of 161 4/8. Unfortunately, the presence of three abnormal points dropped the final figure well below 160-inch mark for a net score.

Despite the difficulties involved, there have been three 4×4 racks taken in North America that have exceeded the almost unbelievable scoring level of 180. While it might be a stretch to suggest the possibility of a Georgia whitetail attaining that mark, nothing is impossible.

There is ample evidence to suggest the state has already produced at least one giant buck approaching this size class. During the 1960s, while walking through a tract of Jones County woodlands, a hunter discovered a massive pair of 4×4 shed antlers. The sheds were nailed to a wood plaque for display, where they remained until the early 1990s, when they were acquired by another individual. During that period of time, they briefly passed through the hands of well-known outdoor writer Duncan Dobie.

Recorded measurements of the matching sheds, which included 30-inch main beams, project the mystery buck’s gross score in the 180 range. An arbitrary figure of 20 inches was used for the estimated inside spread measurement. Despite asymmetry deductions, plus the presence of two abnormal points, it is doubtful the final score would have dropped below 170. Only time will tell if another 8-pointer of this size ever materializes in the Peach State. Meanwhile, we can marvel at our Amazing Eights. This Ben Hill County buck killed by Wendell Davis during the 2016 season had a net score of 164 6/8.