When a 9-foot-long, 1,100-lb. hog was killed in Fayette County it became a story that spread like wildfire — literally going around the world on the internet and in the media.

CNN, Fox-5 News, the local papers, radio stations from Seattle and Los Angeles to Jacksonville, and the Discovery Channel contacted Bill, and even the British Broadcasting Corp. (BBC) called from London to get the details on a hog being touted as a new world record.

“Unfortunately, I don’t have a great hunting story,” said Bill Coursey of Fayetteville, Georgia, who shot the hog in a neighbor’s yard.

Thursday afternoon, January 4, at about 3:30 Bill’s wife and son were driving home in rural Fayette County when they saw the huge black hog standing in a neighbor’s yard. The hog had come out of a field, crossed the road and was munching on water-oak acorns. They pulled into the driveway for a closer look.

“The man who owns the property said, “If y’all want to shoot this thing, shoot it,” said Bill.

Bill’s son went home to get Bill, who returned with his Ruger 7mm/08. 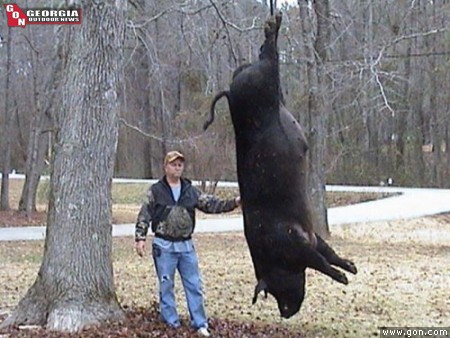 Bill Coursey of Fayetteville with the 1,100-lb. hog that he shot in a neighbor’s yard. The hog may be the heaviest ever with a documented weight.

“When we came around the corner, it just about blew me away when I saw the hog,” said Bill, a life-long hunter. “It was huge. When we drove up, the hog just looked at me. It was like the deer around here, if you walk out in the yard they will just look at you as long as you don’t get too close.”

From 30 or 40 yards away, Bill shot the hog behind the ear with a ballistic-tipped round, and the mammoth hog crashed on the spot.

“After I shot it, it was like a circus around here,” said Bill. “I had the hog hung in a tree, and everybody was coming up with a camera. CNN called, and the New York Times. People I didn’t even know were coming up to take pictures of it. The bucket on a backhoe was barely big enough to move the Fayette County pig, which was weighed on truck scales at a county transfer station.

“There was a lot of history of the hog around here,” he said. “Several people told me they had seen the hog, and three others nearly the same size, in the area. Apparently it was running a three- or four-mile radius in south Fayette County near Brooks, and it had been seen for years. I had one guy come up and thank me for shooting it. He said he had built a new house and all four hogs had come in and rooted up all his sod.”

The hog Bill killed had long coarse hair, big broad shoulders and a head that was “humongous.”

“His size made it look like he had a lot of domestication in him,” said Bill. “But I think it is a true wild boar.”

The bucket on a back-hoe was required to load the hog into a truck. The only scales Bill could find that would handle the weight were truck scales at a Fayette County waste-management transfer station. The truck was weighed with the hog in the bed, then the hog was removed and the truck was weighed again. Bill obtained a video statement from the scale operator and a printout of the weight: 1,100 pounds. This close up of the hog’s snout, with the mouth propped open, shows cutters that measured about four inches long.

After untold numbers of photos were taken of the hog, and several days passed, Bill cut the head off the hog and preserved it in an old freezer. The rest of the carcass was buried.

“I am not really a hog hunter,” said Bill. “This is the only one I have ever killed. The interest in the hog has amazed me. I even got a call this morning from the BBC in London, that’s when it got unreal. Just getting it into GON was going to be a big deal — I was hoping just to get it in GON.”