The Jacks River is a great place to catch wild trout, if you're willing to do a lot of walking. Greg Baugus casts a fly to a deep, steep-sided run typical of the Jacks River hoping for an aggressive strike from a wild brown.

“And miles to go before I sleep.” The closing words from one of the writings of Robert Frost continued to work their way through my mind as we trudged through a blistering April snowstorm up the Penitentiary Branch Trail. Topping a ridge, a strong wind rocked the treetops, and I was forced to hike with my right eye closed, protecting it from the wind-driven sleet and snow that came hard and sharp, stinging the bare skin on my woefully unprepared head.

With heavy, water-saturated packs, my buddies and I were hiking the more than 6 steep miles from the Cohutta Wilderness Area’s Jacks River, and while we were terribly miserable at the moment, we decided the walk was worth it… once we got back to the truck.

The Jacks River, Georgia’s premier hike-in, wilderness fishery, is home to some beautiful wild rainbow and brown trout. The only thing about this river is, it makes you work to catch them. And, as we found out through several mornings spent in the turkey woods, there are birds here, too, but you have to work even harder for them. The Jacks River is full of wild rainbows, like this one that slammed a Stimulator.

Ignoring warnings from a friend who bailed out of the trip at the last moment because of the threat of “tornado-like” weather, Jeffro Daniel, Greg Baugus, Otis the dog and I braved Thursday afternoon Atlanta traffic and arrived at the Dally Gap parking area at about midnight on April 12. With a late start, gridlock traffic and an 80 percent chance of thunderstorms, the omens were ominous — not to mention the next day would be Friday the 13th. However, Jeffro and Greg both work high-pressure jobs in Atlanta and they had both taken vacation time for our annual trip into Jacks. Superstition and a little rain weren’t going to stop us.

Boy, were we glad we ignored the naysayers! Apparently in a rush to feed in front of the incoming weather system, the trout were busting flies on the surface with wild abandon, and once the rain rolled in they started inhaling sub-surface flies like popcorn. The turkeys were not as cooperative. We didn’t hear a single gobble, but there was plenty of scratching along the river bottom, and Jeffro spooked a lone hen while fishing Saturday morning. Greg watches his drift, ready for a hit.

To hunt legally, we stopped on the way in at a small store outside of Blue Ridge on SR 2 to sign in. It is the only place to sign in on the east side of Cohutta WMA.

We began our search for a gobbling tom Friday morning with just three hours of sleep after hiking in and setting up camp the night before. Walking past turkey sign along the Jacks River trail that parallels the river, we couldn’t get a gobble from an owl call or a slate, so we decided to climb the ridge for a better vantage point to listen from. We walked the ridges, running and gunning for several hours, and though we saw plenty of turkey, deer and bear sign, we never got a gobble over two morning hunts.

We returned to camp that morning expecting to find Greg and Otis waiting with hot coffee and breakfast. What we found was Greg still in his sleeping bag with a dirty dog curled up on his feet. So, after scrounging something to eat and guzzling a mug of instant coffee like medicine, we donned our waders and headed upstream from our campsight at the junction of Penitentiary Branch and the Jacks River. 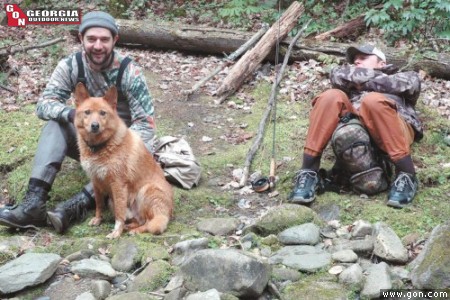 Tired from a morning on the creek, Jeffro, Otis and Greg (from left) take a break.

With two other significant tributaries entering the river just below where we camped, the river above is smaller and tighter than it is down around Jacks River Falls. Drawing from success during last year’s trip, Greg started by dredging a black, size 12, weighted stonefly nymph across the bottom. Jeffro and I opted to fish on the surface, and he tied on a size 14 Royal Wulf, while I fished a size 10 yellow-and-red Stimulator. 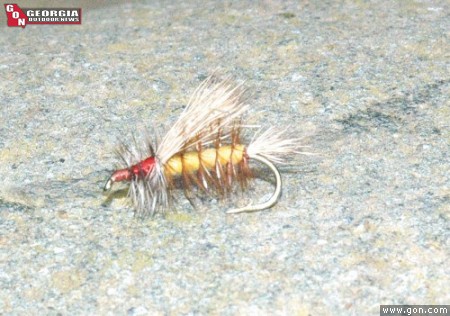 We fished the first three or four runs with nothing but a few splashy rises. I was watching Jeffro work a run when Greg poked his head out of the bushes and said, “There’s a fish rising up here in the next hole, one of you guys with a dry on should come give it a go.”

I humbly accepted the invitation, elbowing Jeffro out of the way to give my best effort at doing away with the skunk. At the top of the hole was a narrow section of riffles, feeding gin-clear water into 10-foot-wide pocket of blue water about 5 feet deep. I watched the hole for a minute and saw the fish rise on the right-hand side of the run just below the riffles. With Greg, Jeffro and Otis watching from the bank, the pressure was on.

Stepping up to my shins at the bottom of the run, I stripped about 20 feet of line from my reel, gave one false cast to feed line out and let fly. The Stimulator settled gently onto the water and bobbed through the riffles on course to the spot where the fish had last risen. Slap… a little brown trout exploded on the fly, startling all four of us with a violent take.

“Got him!” I said, as I lifted the rod to set the hook. A minute later, a pretty 10-inch brown came to hand, still struggling against the line. After modeling for a brief photo session, the fish was released. Brown trout were actively feeding on big mayflies like this march brown. This scene was repeated dozens of times over the next two days until a Saturday afternoon storm forced a change in tactics. Before the weather rolled in, bug activity on the river was unbelievable. Large mayflies — brown, orange and yellow in color — hatched sporadically, and big golden stoneflies, or yellow sallies, darted through the air every time you turned your head.

We all lost count of how many fish we caught over the weekend, but we estimated a total catch of about 60 fish, between 5 and 12 inches long. Seven of those were browns with brilliant red spots, the rest were rainbows with bright pink stripes down their sides.

We kept a few fish to cook over the campfire in the evening and inspected the contents of their bellies after gutting them. Inside, we found all the flies we saw in the air, along with some big, 1/2-inch long golden stonefly nymphs. That information proved valuable as we tried different flies over the weekend. We caught fish on Parachute Adams, Royal Wulfs, Stimulators, March Browns, Yellow Sallies, Golden Stonefly Nymphs and Woolly Buggers, but with the way the fish were feeding, I bet they would have taken any dry fly we threw.

Huddled around a small campfire Friday night, our salivary glands kicked into overdrive as the fish, lightly salted and peppered, sizzled in a pan of butter. They were a welcome addition to the freeze-dried, add-water-and-eat main dish, and Otis certainly enjoyed scarfing the heads and licking the pan clean after the humans had their fill.

On Friday night the cloud cover rolled in, but the action was just as fast Saturday morning when we hiked downstream and fished our way back up. The river is deeper and wider in the section between Jacks River Falls and Penetentiary Branch, the wading is tougher, but the fish seemed to be a little bigger, on average.

At about 3 p.m. thunder rolled through the valley, the wind picked up and a light, steady rain blew in. It did not let up for the rest of the afternoon, but Greg, Otis and Jeffro did. Claiming sore legs and achy backs, they walked back to camp with their tails between their legs. Pulling the hood on my rain jacket down tight, I remained on the stream.

As runoff began to stain the river and the water level rose, the fish began slamming a Woolly Bugger both dead drifted and stripped through the deep, dark holes. There was at least a hit in almost every spot that looked likely, and the anticipation of a heavy tug kept me on the water until dark. The big boy never came out to play, but I bet a red wiggler, spinner or small plug fished on an ultralight would have coerced him into biting in those conditions.

After much effort, we were able to get a wet, little, smokey fire started that evening and sat under a tarp basking in the aroma of wet socks roasting on an open fire. And it was a good thing we dried our clothes because we were not prepared to wake up to temperatures below freezing.

Stiff and tired, we packed up our waterlogged gear and began the long walk out Sunday morning, checking twice to make sure no one had secreted any boulders in the pouches of our backpacks. Last year, Greg climbed the whole uphill section of the trail toting about 20 pounds of flat rocks.

As always, throwing the gear into the back of the truck upon returning to the parking area is one of the best feelings in the world, and blasting the heater all the way to the nearest fast-food joint felt pretty good, too.

“That was awesome. I can’t wait to do it again,” said Jeffro between bites of the best cheeseburger he had ever tasted. “But, I’m not going to even think about it until next year, when I forget how bad it hurts.” On the hike out an April snow storm blew in with high winds.