Blue Ridge fishing guide Nathan Lewis shares some of his tactics that consistently put walleye in the boat in March. The author, Blue Ridge fishing guide Nathan Lewis, with an impressive string of Blue Ridge Lake walleye. With the introduction of blueback herring into the lake, numbers of walleye have dropped but the average size has increased dramatically.

There is just something special about fishing for walleye on a moon-lit night at Blue Ridge Lake. Ever since I was a child I remember casting a doll fly across the rip-rap rocks at the dam. The moon would rise to my back, and the water would glisten with every ripple of wind. I would cast the fly to the rocks and wind the lure back very slowly. I would sweep the rod up and down slightly to give the lure a little more action. Then, all of a sudden, I would feel the lightest tick on the end of the line. If I could set the hook quickly enough, soon I would boat one of the most unique and best-tasting freshwater fish Georgia has to offer — a walleye. Some of the same tactics I  learned in childhood will still put wall- eye in the boat today. Blue Ridge Lake is by far Georgia’s best lake to catch walleye, and a full moon night in March is an excellent time to catch them.

Blue Ridge is a 3,290-acre Tennessee Valley Authority (TVA) reservoir located in Fannin County. From tip to tip, the 78-year-old lake is 11 miles long and has 65 miles of shoreline. In this pristine mountain setting you will see an abundance of wildlife, some magnificent views and find good fishing for both walleye and smallmouth bass.

Blue Ridge is a flood-control reservoir. Generally speaking, the TVA draws the lake down about 40 feet during the winter in order to catch the spring run-off. Every five years or so, the TVA has an extreme draw- down to inspect the dam. I have seen the lake when it was 76 feet below summer pool. My wife and I rode around on the bare banks videoing any irregular features. The lake bottom is loaded with stumps, some awesome rock piles and some major drop offs. These are the places that will hold walleye.

Over the years, walleye fishing on Blue Ridge has changed from catching numbers of fish to catching bigger walleye. Years ago you could often catch 30 or 40 fish a day, but you would be lucky to catch a 2-pounder. We referred to the small fish as “cigar pike,” because most of them were about as long as a cigar. While several of the mountain lakes have walleye, only Blue Ridge has a self-sustaining population. The current lake-record walleye, caught in 2001, weighed 9-lbs., 4-ozs.

Today, most of the walleye weigh from 2 to 3 pounds with an occasional much-bigger trophy. We believe the decrease in numbers was caused in part by the illegal stocking of blueback herring into Blue Ridge. Bluebacks feed on both the eggs and fry of other fish during the spawn. We are seeing very few young-of- the-year walleye this year. That’s the down- side to bluebacks.

There is, however, an upside. The walleye in the lake that are large enough to eat them love bluebacks. They are gorging themselves on the baitfish that swim in large schools at Blue Ridge. Fat 2- and 3-pounders are the norm, with some 6- to 8-lb. walleye being caught, and some huge “eyes” weighing more than 10 pounds are being reported.

Fishing the full moon in March can be especially productive because the fish are on the move into shallow water. During this time you will have all three stages of the spawn going on depending on which part of the lake you are fishing.

Rocks are generally the key to finding walleye. One of the best banks on the lake is simply to fish across the dam on the rip-rap rocks. The rocks are a magnet for craw- fish, and the walleye will be on the rocks to feed on them.

I usually lean more to fishing rocky banks and points rather than the red-clay flats and pockets. Walleye usually relate to rocks. Most rocky main-lake points or banks will hold fish. If you find a place where the size of rock changes suddenly, that is usually a good place to find fish.

Walleye are light sensitive and stay deep during the day. But on full-moon nights the walleye will move in close to the shore to feed. You can catch them on several different lures, but three of my favorite nighttime lures are a No. 5 Shad Rap, a small curlytail jig, and the old Blue Ridge standby — an orange fly with a chartreuse twister.

When throwing a Shad Rap, I prefer to cast to the bank with the boat in open water. Walleye will often follow a bait a lot longer than most other fish. A lot of strikes will occur right at the boat, so you always have to be ready. A No. 5 Shad Rap cast to a moon-lit rocky point or bank has account- ed for large numbers of walleye. The lure is one of the most popular on Blue Ridge.

The color of the lure doesn’t seem to matter. I have caught walleye on all of them, but I just have a lot of confidence in the natural-looking shad pattern.

When choosing a small curlytail jig, I prefer a chartreuse- or pearl-colored twister. I usually use a 1/8- to 1/4- oz. lead head, and I leave the hook exposed. I cast the jig to the bank and slowly wind it back to the boat. If I don’t have any success, I will cast the lure and start counting it down before I begin to retrieve until I find the depth where the fish are holding.

My favorite nighttime lure for Blue Ridge walleye is an orange doll fly. I throw an 1/8- or 1/4-oz. fly tipped with a chartreuse twister. I will work the bait just like the curlytail jig. If the fish will not take the other offerings, I will work the fly off the bottom. When I use the bait this way, I will cast it out and let it sink to the bottom. Then I will sweep the rod upward to about the 12 o’clock position to pull the fly off the bottom. Then I drop the rod tip to let the lure fall back to the bottom while watching and feeling for anything different. Yes, I said watching. For keep- ing an eye on the line after dark a black light comes in very handy.

On all my nighttime equipment I use 6- or 8-lb. test clear-blue fluorescent line. This will show up like whale rope in the black light and will help you detect strikes you would otherwise miss in the dark.

If artificials are not working, or if you prefer to fish live bait, another effective method to catch walleye after dark is to fish nightcrawlers. One of the most productive methods is to simply hang a lantern over the side of the boat. Try to have the boat over at least 30 feet of water over a rocky point. Just sit tight, and let the lantern light draw in the small baitfish, and soon the eyes will be there to feed, too.

When fishing worms, I use a No. 4 bait-holder hook with the smallest weight I can get by with. I rig the nightcrawler just like a plastic worm rigged Texas-style. This is almost always a productive way to catch walleye during the night.

If night fishing is not for you, walleye will bite during the day although the fishing is quite a bit different because walleye don’t like bright light. During most of the daylight hours they will hold in much deeper water than at night, and the fishing tactics are different.

If the fish are on the bottom, they are easier to locate and catch. A jigging spoon or a Texas-rigged nightcrawler are good bets. The problem is trying to figure out what depth is right for that day. I have caught walleye in 10 feet of water, and I have caught them in more than 90 feet of water. As always, finding the walleye is the difficult part. A long-time standard on Blue Ridge for walleye (and smallmouths) is an orange hair jig — called a fly — dressed with a chartreuse curly-tail.

When jigging a spoon, you have to depend on what your electronics are telling you. You should start out over about 20 feet of water and start working your way down the points to the main channel. If you know where there are stumps or where a good rockpile is located close to the river channel, that is a bonus. You will see the fish on your depthfinder, and they will normally be right on the bottom.

There are several ways to work a jigging spoon. You can drag it, cast it or jig it. If you jig it straight up and down, you can tight-line it back to the bottom. While you are lowering it back on a tight line, feel for the slightest tick. If anything feels different, set the hook.

Another method, and the one I prefer most when vertical jigging a spoon is what I call loose-lining. I jig the spoon up 2 feet or so and then drop the rod tip to let the spoon fall on its own. The lure is supposed to look like an injured or dying shad fluttering toward the bottom. I try not to feel the lure at all; I just watch the line. Sometimes when a fish hits, the line will jump, stop falling or speed up. If anything interrupts the spoon, it is probably a fish. The fish usually pick up the spoon when if falls, and when you raise your rod tip you will feel the weight.

If vertical jigging with a spoon is not for you, you can also try bottom- bouncer jig head tipped with a nightcrawler, or troll deep-diving crankbaits.

No matter whether it is day or night, whenever you can go fishing the time is right. Walleye are great-tasting fish that can be caught year-round. However, if you get a chance to fish on a full-moon night in March, don’t let the opportunity pass you by. The fish are active, on the banks and it is prime time to catch walleye at Blue Ridge. 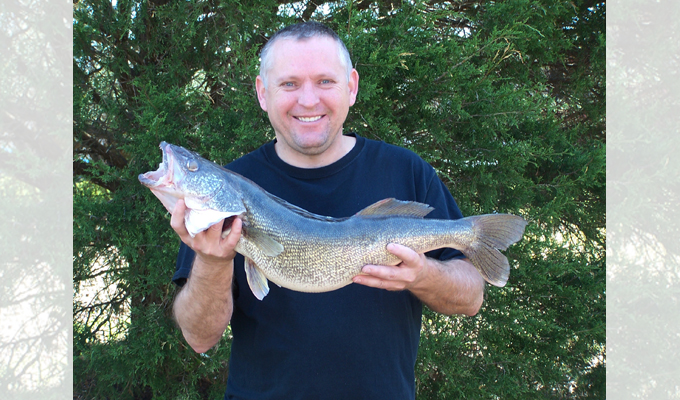