Three years into a five-year effort to determine whether or not a wild-trout fishery is viable in the Chattahoochee River tailwater below Buford Dam, WRD biologists are collecting data that is very promising.

WRD Fisheries Biologist Chris Martin recently finished the state’s 2007 fall electrofishing surveys, and even though analysis of the findings will not be completed for several months, the fish collected seem to support what Chris suspected. Stream-born brown trout in the Chattahoochee tailrace are healthy, they are reproducing in adequate numbers to support a fishery and they appear to be growing to catchable sizes in the 20-mile stretch between Buford and Morgan Falls dams.

Using a jetboat mounted with spider-like electrodes that hang in the water off the front of the boat and emit a fish-stunning electric current, five sites were sampled on the Hooch above Morgan Falls Dam. The temporarily incapacitated fish floating near the surface were collected using a long dip net, then they were placed in a large livewell. The majority of the fish collected this year were revived and released after being weighed and measured, but an unlucky few brown trout of different lengths were kept for lab studies to determine age and growth rates.

Chris and Fisheries Biologist Mark Rigglesford sampled sites at Buford Dam, Settles Bridge, Jones Bridge and two sites at Abbotts Bridge in their annual survey, and what they found was more brown trout than rainbow trout. In fact, a clean 70 percent of the fish collected were browns, which suggests the fish are doing well, since the WRD stopped stocking browns in this section of the river three years ago. More than 150,000 hatchery-raised rainbows are dumped into this section of the river each year, yet only 30 percent of this year’s sample consisted of rainbow trout. WRD stocks the same total number of trout as it used to, stocking additional rainbows to make up for the browns it no longer releases. 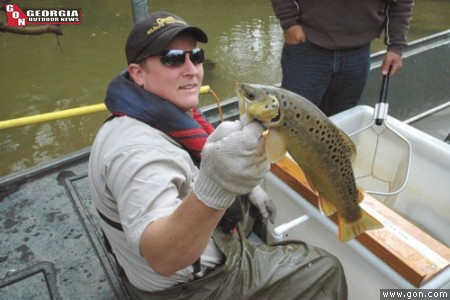 Anglers shouldn’t worry about the rough handling of this nice brown trout. It was kept, and it will be aged to determine whether it was stocked or if it is without a doubt a stream-born fish.

“To me, it’s impressive,” Chris said. “Especially in light of the fact that we don’t stock browns.”

For this reason, the fish that were kept during this year’s sampling will be aged by the rings on their odeliths, inner-ear bones that develop annual rings like a cross section of a tree. The age and size data will be compared to determine the growth rates of the fish, which would indicate whether or not the stream-born trout are growing big enough to keep anglers happy. Though brown-trout stockings were halted three years ago, and more than 150,000 rainbows are stocked each year, 70 percent of this year’s sampled fish were browns. This net of fish came from one site.

Chris is also conducting young-of-the-year sampling each year in April, which provides further evidence that brown trout are successfully reproducing. The samplings are conducted using backpack electrofishing equipment near the banks, where young trout in the 1-inch range live.

“I’m pleased with what I’m seeing for young trout this year. We’ve got good numbers of fish that in all likelihood were spawned about a year ago,” Chris said. “Some years are better than others, but this year was the best ever — by far. We’ve got a real strong year class.”

The findings of these samplings, along with creel surveys that are currently being conducted, will help WRD determine whether the stretch of river should be managed as a wild fishery for brown trout or if stockings should be resumed. However, the impetus for halting stockings and conducting research on the wild population of fish was not limited to providing the best fishery for anglers. Down the road, the possibility exists that the state will provide added protections, and restrictions, for water quality on the Chattahoochee. The jetboat was mounted with spider-like electrodes that stunned the fish to be netted. On the boat (from left) are Chris Martin, Cohutta Chapter of Trout Unlimited President Bruce Rickey and Mark Rigglesford on the net.

“With all the competing uses for the river out there, the likelihood of that standing the political trials was pretty remote,” Chris said. “And, the primary designation is really meant for natural streams. This is more artificial; it would be a warm-water stream if it wasn’t for the cold water coming out of Buford Dam. Our charge was to study what would be a new set of standards. To develop a set of standards based on sound science and research, and conduct some research to see if those standards would protect and enhance trout survival.” Mark displays a handful of browns that were most likely spawned in the Chattahoochee. While big fish are fun to look at, fish this size are proof that brown trout are reproducing and growing to catchable sizes in the river.

Working with the Georgia Environmental Protection Division, WRD is developing a new set of criteria designed to limit sedimentation and keep water temperature changes to a minimum to provide adequate conditions for trout reproduction. The criteria will also be designed to be enforceable, and they will cover more than just the stretch down to Morgan Falls, Chris said.

The new designation, which could either be specific to the Chattahoochee or cover other tailwaters in the state, is being considered for 48 miles of the Hooch from Buford Dam all the way down past Morgan Falls Dam to Peachtree Creek.

“Additional protections below Morgan Falls could possibly bring the area back,” Chris said. “Back in the 80s it was a blue ribbon trout stream.”
Both the redesignation of the entire tailwater and a decision on stocking practices in the upper 20-mile stretch of the tailwater are up in the air. Chris said he will continue his studies for two more years before compiling all of the sampling and creel survey information to present to the public.

“What we’ve got to determine is how successful anglers are at catching wild brown trout. What we want to do is compare with and without stocking and see if it significantly affects angler success, not only from the number of fish per hour, but also from the size of the trout they’re catching,” he said. “I have no doubt that they’ll catch fewer brown trout. They’re wild fish; they’re tougher to catch. But anglers still have the same opportunity to harvest trout as they did before. We are still stocking the same total number of trout as we were before.”

Check out the par marks on this beautiful brown trout, which was quickly released.

The Chattahoochee River is one of three rivers in the world that runs through a metro area with a population of more than a million people and supports a trout population. It will be up to anglers to decide whether or not there is an added value to fishing for wild, naturally reproducing brown trout as opposed to their hatchery-raised brethren.