The folks who work under the Parks Division of the Department of Natural Resources are hoping a four-foot drop in the lake level at High Falls  will be enough to repair a leak in one of the dam’s two doors.

“The Safe Dam Committee has mandated us to fix the leak in the dam’s door,” said Bryan Gray, assistant park manager for High Falls State Park.

The Safe Dam Committee, a group under DNR that inspects dams, found the leak in the dam’s door over a year ago. Bryan said that even though there’s a leak, conditions are still considered safe for now, but the repair has been mandated.

“It’s not spitting out enough water to affect the level of the lake,” said Bryan. “They’re not very big doors.”

A 4-foot drop is scheduled for as early as December, a drop that will allow the 650 High Falls dock owners the chance to work on their docks. The mystery for Parks is whether or not a siphon system will be strong enough to lower the lake.

“The other way to lower the lake would be to open the dam’s doors,” said Bryan. “We’re scared if we open the doors we’d never get them shut. They’re so old. The dam was built in 1904, and I don’t think the doors have been opened in 10 or 12 years.”

If the siphoning system works this winter, then a private contractor will go in and see if the dam can be repaired without lowering the lake any farther. If it can’t, DNR has discussed lowering the lake more than four feet in September 2006, a possible target date, according to Bryan.

Right now nothing is for sure until they see if the siphoning system will work and then see if the dam door can be restored.

When GON first learned about this story we heard there was a chance the lake would have to be drained.

“I honestly don’t think you’re going to see us completely drain this lake,” said Bryan. “We have one of the best bass populations, and we don’t want to affect that. We’ve got Fisheries working with us on this so that we can be assured that when we lower it we are not going to damage any fish habitat.

“In some places this is a shallow lake, and four feet could drop it tremendously in some places.”

In other lake-leaking news, the new Ocmulgee PFA lake sprung a leak in the lake’s bottom over the summer. The leak was discovered when water was bubbling in the swamp just downstream from the dam.

“There were three areas where we suspected we might have leaks in the lake bottom that could have allowed water to leave,” said Les Ager, region IV fisheries supervisor.

The biggest leak they found was above an old cofferdam, and at presstime 2,300 square feet of grout had been pumped into various voids in that hole. A few voids were still scheduled to be filled in mid November. Twenty acres of water was held in the lake when finding and fixing the leak.

This 106-acre lake is stocked with F1 bass and has good crappie and bluegill populations. The PFA is scheduled to open June 10, 2006. High Falls Lake, All Around Good 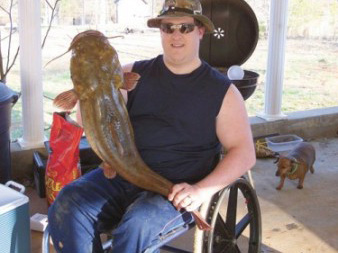 High Falls Flatheads With The Sultan Of Slime