Wouldn’t it be nice if the weather was always great when we planned to go fishing? Most times of the year it is, but in the late winter and early spring, it seems like we get a few warm, beautiful days followed with intermittent cold fronts that sew shut the mouths of every bass on our favorite body of water. During March, the weather is starting to warm up, but we’ll still be dealing with the realities of winter at times.

Even when March bluebird skies mean cold temperatures, gusty winds and persnickety spotted bass, there will be anglers catching them. Michael Murphy, of Kennesaw, is one of those people. Michael came highly recommended when I was looking for a fisherman to show us how to catch bass on Lanier in March, and there is a reason for that. Michael knows Lanier extremely well, a fact he attributes to several local fishermen.

“Mack Farr, Rick Steckelberg, Doug Youngblood; those are some of the guys who helped me learn the personality of this lake,” Michael said. “What I know about Lanier wouldn’t be possible without those guys.”

How the 25-year-old bass angler got where he is today is its own feature story, but for the sake of space, you get the abridged version. When I fished with Michael, he was two days away from leaving his job with high-end tackle manufacturer Spro to pursue a full-time professional bass fishing career on the FLW Series, which kicks off its 2006 season with a March 8-11 tournament at Lake Lanier.

“There are 200 boats, and I would love to cash a check from the first event,” Michael said.

Michael, who is from Plainfield, Ind., started winning local and regional bass tournaments as a teenager. He is a math whiz and was attending Purdue University to study engineering. When Michael started his engineering classes, he realized sitting in an office wasn’t for him, so he began studying fisheries biology.

Michael was the first underclassman ever elected to lead Purdue’s bass club, which won the Big 10 title twice while he was in college. The bass club drew the attention of ESPN Outdoors, which brought Denny Brauer to the campus to film an episode of “Bass Class.” They got enough footage for two seasons.

“That really put fishing on the map at Purdue,” Michael recalled. “Our membership went from 30 to about 70 in one year.”

During his time at Purdue, Michael helped run a study of crawfish. He learned so much about the different species, color phases and behaviors, he can just about predict a good jig bite by checking the water temperature. That knowledge helped Michael and his friend Dan Davidson win a boat at the Fishers of Men national championship on Kentucky Lake one year.

“The fish were on a crawfish bite,” Michael related. “The crawfish were about two weeks ahead of what they were doing up north, so we knew exactly what the fish wanted.”

Dan had moved to Georgia, and one year on spring break Michael came to visit and spent the week fishing Lanier out of Dan’s boat. He ended up working a summer at The Dam Store, and after he graduated and his wife finished pharmacy school, the pair moved to Georgia. 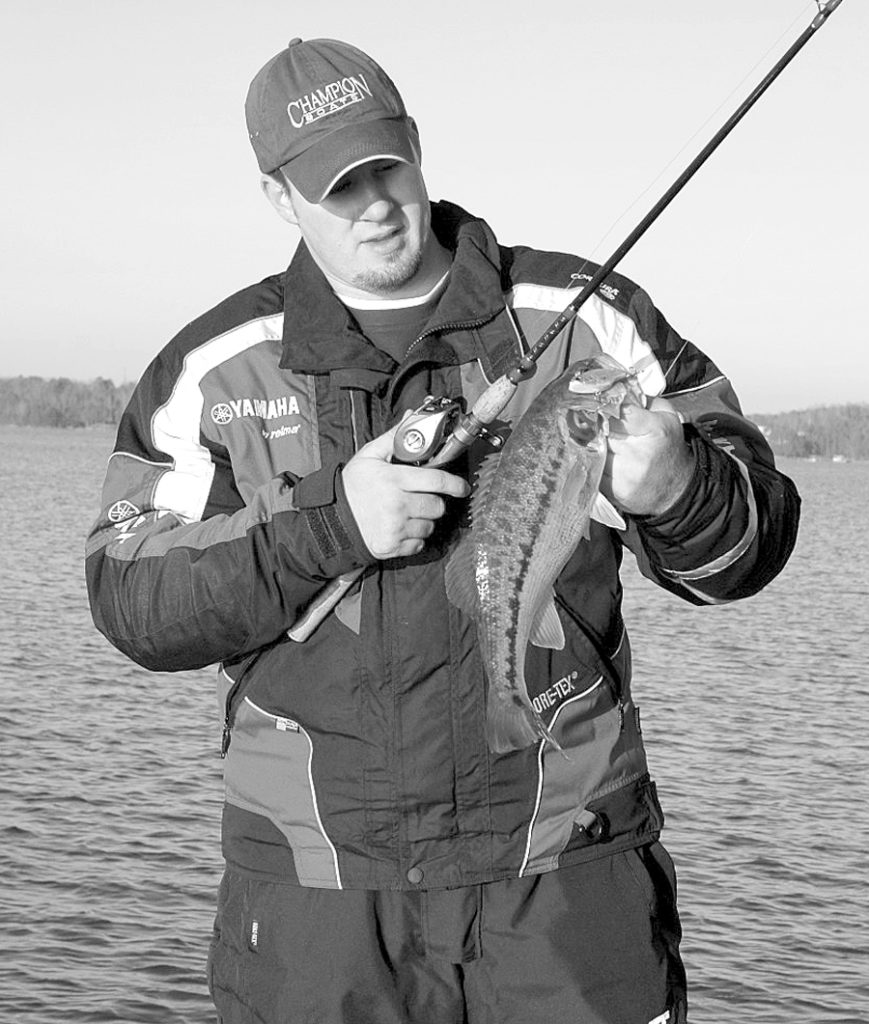 For a guy so in tune with what the crawfish are doing, you would expect us to hop jigs down rocky points all day, right? Wrong. Michael will fish a jig when the time is right, but until that time comes, he is more of a power fisherman, finding aggressive bass by covering water.

But Michael doesn’t just go fishing around willy-nilly until he finds feeding spotted bass. Instead, he plans ahead and searches for offshore features and funnel areas in pockets.

Michael will target specific types of structure with jerkbaits, Fish Head Spins, lipless crankbaits and spinnerbaits. He took me to Little Hall in February and showed me his tactics.

March is staging time for spotted bass. The water is warming up and the fish know the time to spawn is getting near, so they begin to feed more aggressively, and they start moving from main-lake areas back into the major pockets and creek arms.

“Early in the month, the fish will be on points at the mouths of the major pockets,” Michael said. “As it warms up, they will start moving back, and when the water gets up to about 58 to 60 degrees, they’ll move all the way back to spawning areas.”

If you are on Lanier, you are likely to see Michael out where most bass fishermen never go. He doesn’t do a lot of bank beating, and he’s not looking for cover like stumps or brushpiles. If they are present, he’ll target them. But he would rather be fishing something permanent.

“I prefer to fish structure, which is something permanent, like a ledge, that fish to relate to when they travel and feed,” Michael said.

When Michael and I began our trip by running up the Chestatee River from Little Hall, the tail end of a cold front was providing us with snow flurries, and the sky went from clear to cloudy to clear again in a matter of an hour or so.

In the first pocket we stopped to fish, Michael cut the motor and dropped his trolling motor over the bow of the boat. We were 50 yards from the closest bank, fishing a roadbed that ran diagonally across the pocket.

“The fish will hold along this old roadbed,” Michael said. “The clearer the sky, the closer they will get to the edges where it drops off.”

Michael and I made casts with flukes threaded on 3/8-oz. Swarming Hornet Fish Head Spin lead heads. Michael casts the bait along roadbeds or around humps. He allows the lure to sink all the way to the bottom, gives the rod tip a slight pop to get the blade turning, and turns the handle of the reel just fast enough to keep the spinner moving, throwing off the flash and vibration that can trigger strikes from less aggressive bass.

We didn’t fish the first spot long before we motored to a similar pocket a short boat ride away.

“The spots on this lake seem to roam so I don’t fish an area very long,” Michael said. “If I’m not getting bit in 10 or 15 casts, I’m moving somewhere else.”

Another couple of boat rides later, Michael and I were still trying to put the first fish in the boat. We were in the middle of the lake, fishing a hump that topped out in about 20 feet of water. We cast the Fish Head Spins on the hump, let them sink and started them back on a slow retrieve when Michael suddenly set the hook on small bass.

“Usually where you catch one, there’s another one,” Michael said. “Keep casting out there, and let’s see.”

The Fish Head Spin didn’t draw any more strikes so Michael picked up a rod rigged with a Spro Aruku Shad. Michael said a lipless crankbait can be a great bait in March. Any lipless bait will likely work, but Michael likes the Aruku Shad because it stands on its nose when it’s on the bottom. Michael works the bait like a Carolina rig when water temperatures are low, letting the bait settle to the bottom, pulling it with the rod tip, and reeling up the slack. As it warms up, he goes to a more conventional retrieve.

We didn’t have any more luck on the hump, so we took off for another spot. Michael had stopped along a steep bluff wall where big chunks of rock slid down, piling up in the edge of the water and below the surface where we couldn’t see. Michael and I had both switched to jerkbaits and were casting at various angles to the bank and working the lures with different retrieves.

About halfway down the wall, where there was a transition from rock to clay, Michael got a bite. He lipped the 2 1/2-lb. spot, unhooked it, and was fishing again in short order. A couple of minutes later, another spotted bass took the Lucky Craft Staysee 90 when Michael realized what was going on. The bass were holding on a current break where the wind was pushing water past a rock outcropping. The strong air movement coupled with the current had put a foam line at the edge of the break, and the bass were there waiting for lunch to wash by their noses.

After the sun came out, Michael started looking for another feature he loves to fish in March: narrow pockets.

“I’m looking for pockets with steep sides because they’ll have deep water and they provide excellent funnel areas for bass,” Michael said. “When bait comes into those areas it gets squeezed through smaller passages,  and the bass can eat easily.”

As water temperatures warm up into the mid 50s, Michael is looking for bigger fish by staying deep but using a faster bait. He’ll probably go away from the jerkbait or Fish Head Spin in favor of a 1-oz. Lunker Lure spinnerbait. Michael uses the spinnerbait in the same type areas he and I fished. When the fish get really shallow, he’ll downsize to a 3/8-oz. spinnerbait. If conditions call for a slow presentation, that’s when Michael will break out the jigs.

“Search for the best fish in 15 to 30 feet of water,” Michael suggested.

When Michael gets on Lanier in March, he’ll be checking points and ditches in transition areas, those places from the mouths of the creek to halfway back where fish are likely to be holding before conditions get just right to signal the start of the spawn. Once the water tempereature is right, he’ll go all the way back in the creeks in search of spawning spotted bass.

Michael thinks like a scientist. He understands how fish react to cold water, warm water, sunlight, cloud cover and a million other variables. One would think that means Michael is super precise about the size, color, speed and depth of his baits. However, he advises anglers to keep their fishing simple.

“I would tell people to not get too detailed,” Michael said. “It’s just fishing. Do what you are confident doing.

“Instead of laying 10 different rods with 10 different lures on the deck of the boat, pick three or four you know will work and stick with them.”

Still, Michael knows that anglers have a tacklebox full of gear for a reason; to catch bass under a wide variety of circumstances. So he suggests that anglers not be afraid to experiment. And he cautions against trying to catch fish while you are still at the boat ramp. In other words, don’t be so stubborn with something that you miss chances to catch more bass.

“Don’t set in stone what you are going to do ahead of time,” Michael said.

Visit www.michaelmurphyfishing.com to get more of Michael’s tips on catching Lanier’s spotted bass.