So I was digging through my hunting gear and came across my license from the 2001-2002 hunting season. I killed my first deer with a bow that year at age 14 on the opening afternoon of archery season. I remember every minute of that hunt.

That day at lunchtime my dad and I scouted a new area of our lease at the time, and we were seeing all of the right things. I walked down the creekbed and found where several really good trails were crossing it and told my dad I wanted to hunt there. He said, “No way. I’m hunting here. We’ll find you a spot a little farther down.” I think he knew he was the better shot and that we needed the meat.

Right at 3 p.m., I put my climber in a tree that was growing right on the edge of the creek about 100 yards down from my dad at another good crossing and climbed up. We were within shouting distance but couldn’t see each other.

Before I could even pull my bow up, I had deer walking down into the bottom where I was. I was in such a hurry to pull up my bow that it was banging all around my tree. There is no reason the sight should have still been on.

Dad had told me, “We need meat. If you get a good shot on a doe or buck, take it. And no matter what, don’t get down until dark.” I don’t think he or I expected what was going to happen.

When I realized that I had two bucks walking right to me, I could almost hear my tree stand chattering from me shaking. I didn’t even have time to take the quiver off of my bow and a really nice 8-point was in range.

I knocked an arrow and when the buck stuck his head behind a tree at 20 yards, I drew my bow. Before I could get to full draw the arrow fell off the string and hit the stand, making a loud clang, and the 8-point bounded off to about 40 yards, which was well beyond my comfortable 25-yard range at the time.

The other buck couldn’t figure out what his buddy was so afraid of and kind of circled down the ridge toward me. I instantly forgot all about the mistake I’d made just seconds earlier. I knocked another arrow and was so laser focused on doing everything right that I never even took another look at his antlers.

However, I wasn’t in the clear yet because the buck was at eye level with me and less than 10 yards away on the ridge on the opposite side of the creek. He should have seen me when I came to full draw, but this was just meant to be my deer.

When I touched the release, I watched my arrow disappear right behind his shoulder. The buck ran about 20 yards up the hill and stopped. His tail flicked a couple of times right before he toppled over to the ground and stayed down.

I was losing my mind about as quietly and fast as a 14-year-old boy could, all things considered. And then I remembered my dad’s direction. “No matter what, don’t get down until dark.”

Dad and I did not have cell phones back in 2001, and I was not about to yell to him 20 minutes after I got into my stand. From about 3:20 until right at dark I did as I was told as I stared at my deer that lay almost within bow range. I still didn’t know exactly what sized buck I had shot.

Finally with just enough light to see what I was doing, I climbed down. I left everything at my tree and ran straight to my deer. It was a beautiful 10-point with chocolate palmated antlers. I couldn’t believe it.

Dad didn’t believe me so this went back and forth a few times before he yelled, “I’m coming over there and there had better be a 10-point on the ground.” When I replied “Ok,” I’m sure he must have known I was serious because I could almost hear the excitement in his footsteps that quickly went from a walk to nearly running.

When dad got to me, he said, “You sure did kill a 10-point!” He wrapped me in a big hug. At that point in our hunting careers, neither he nor I had killed a deer this big, and he was as happy for me as he would’ve been if it was his buck.

I don’t remember every hunt I’ve been on, but this one is vivid. I tell it often, and it’s definitely one that I will never forget. I almost get misty eyed thinking about how proud dad was of me.

This year my 14-year-old son Kelly III has worked all summer with his bow. I’m hoping to help him drag out a 10 point, too… Kelly Brookins Jr. with his Franklin County bow-kill from 2001. 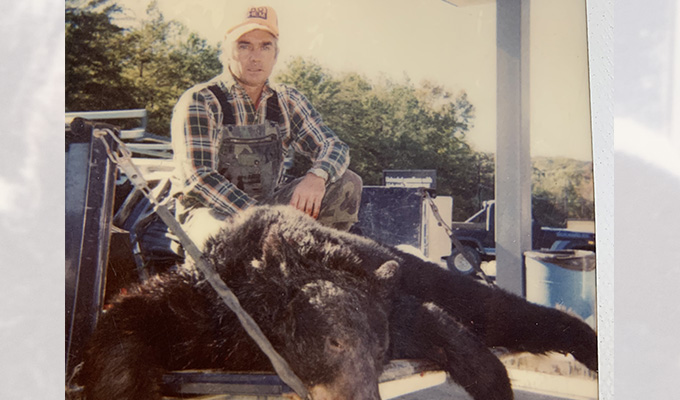