You'll put in some effort, but the views are worth every step.

I can’t even tell you how many times during the last 35 years I have driven up over Blood Mountain on Highway 129. Left turn. Right turn. Hairpin turn. That’s the route I took when I lived in Marietta as a teenager and the route I still take headed from Morgan County as an old man.

Every time I’d see that brown and yellow sign “Byron Herbert Reece Memorial Trailhead Parking”. Then for years when our family would head up that way camping we’d pass it, and I’d say to my boys, “Let’s go do that hike.” Never did. That changed a couple of weeks ago.

In October I hiked the DeSoto Springs Falls trails—a bit over two miles with some nice waterfalls as the payoff. After my hike I drove north on 129 toward Vogel State Park, and I passed that brown and yellow sign. That was the day I decided I was going to finally make that hike. So a few Saturdays ago I got up early, drove two hours and parked at 9:30 a.m. I put some waters in my trusty Osprey Daylite Plus pack, and I opened up the AllTrails app on my iPhone to Blood Mountain/Freeman Loop Trail—6.1 miles, 1,545 feet of elevation gain. I was off. Leaving the parking lot, the Byron Reece trail is a .7 or so mile spur trail that connects to part of the Appalachian Trail. Within .2 miles there is a creek crossing. It’s about 12 to 15 feet wide. I was able to hop from rock to rock to cross and keep dry feet. It had rained a few inches the night before, so the water was probably flowing heavier than usual. Once across there are plenty of rocks, roots and switchbacks as this is a steady uphill trek. Be prepared with good footwear made for hiking.

At the intersection of the AT I went right and pretty quickly took the Freeman Trail that veers off to the left (look for blue trail blazes). The AllTrails app users said the counter-clockwise route is a more gradual ascent than the clockwise route. There aren’t many great overlooks on the Freeman, but I did encounter several places where waterfalls were pouring down the mountain. Really cool to see. I’m guessing it isn’t always this way, but the heavy rain a few hours earlier was the cause. Again, plenty of large rocks along this pretty narrow trail as you gradually wind around the mountain. After a few miles Freeman ends before you reach the summit at another part of the AT. You’ll see an established camping area for AT hikers toward your left, but you want to go right for the summit.

As I followed the AT headed to the top of Blood Mountain, I passed the trailhead for Slaughter Creek trail on my left. I remembered seeing the other end of that trailhead at Lake Winfield Scott where I camped with the family this summer. It’s about 2.5 miles down to that campground. The AT turned back right a bit just beyond that trailhead. Uphill. Steady and continuous but not all that steep. There are a few wooden signs at designated campsites. They are sized for backpacking tents. I’m guessing eight sites maybe. Then a sign pointing toward a trail to get water. If you got the water, you’d want to run it through a purifier.

Continuing on I passed the Duncan Ridge trailhead on my left. I have know idea where that one goes. I plan to find out. After winding back and forth for 20-30 minutes around the edge of the mountain I could tell I was closing in on the summit. More and more rock outcrops. The trail has a few short offshoots where I found places where folks have camped and some decent views. Next thing I know I came upon the Blood Mountain Shelter. This is a really cool structure. A two-room, four-window neat piece of history sitting right there atop Blood Mountain. The old chimney has been filled in with stones to keep campers from building fires; there isn’t a door and the windows are just stone rectangular openings nowadays. That alone was worth the hike for me. Later I learned it was built with local stone in 1937 by The Civilian Conservation Corps. They constructed it for the Georgia State Parks.

At this point I began my ascent back down following along the AT. The trail is a bit more difficult to follow at this point as it skirts across exposed stone. If you follow the white blaze markings painted on the stones, you will be OK. This is the place where you get the best views, too. You get peeks into the valleys on either side of the summit. A great time to sit down and sip some water and appreciate the effort to get there.

The decent down the AT includes scrambling across some boulders and switchbacks. Even though I was headed down, there were some tricky spots. Lots and lots of big rocks to navigate. I nearly landed on my wallet a few times. Soon the trail becomes more defined, again making it easier to find your way. At the 5.5-mile mark I was back at the Byron Reece intersection. Took the left there and eased my way back to the parking lot. My feet were good, but my legs were tired. What I learned… Get there early. Parking is free but limited. It’s a popular trail. I saw four hikers headed up, but there were groups upon groups as I finished the last 2 miles. Wear hiking boots or shoes. I love my Merrell Moab 2 shoes. Bring a day pack with some water and a snack. Wear layers. I was sweating early and had a sock hat on when I was up top.

Not sure where my next hike will be, but after 30+ years I can finally say I hiked Blood Mountain. I’ll probably do it again, too. Maybe this time up Slaughter Creek from the Lake Winfield Scott campground.

We are blessed to still have this wilderness area in the north Georgia mountains. Take advantage of it while you can, and share your favorite hikes and camping areas with me at [email protected]. Take some pictures, too! 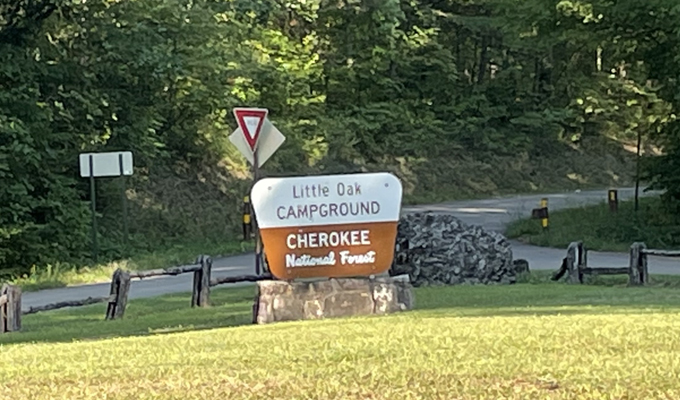 Hike To Sand Cave And White Rocks Via Ewing Trail