When it is late December and the forecast predicts decent weather, you take advantage of it. So when I saw temperatures were expected to be in the upper 40s on Dec. 29, I got up early and headed for South Cumberland State Park just outside of Monteagle, TN. The park is 30,845 acres that spans across the counties of Grundy, Franklin, Marion and Sequatchie. The acreage isn’t contiguous like most state parks I am accustomed to visiting, but you will find 90 miles of hiking trails, both primitive and back country camping, along with world-class rock climbing opportunities and lots of waterfalls.

There are 11 trailhead parking areas giving access to various sections of the park, and I was headed to Denny Cove which is in the southwest portion of the park. The Denny Cove tract is a 685-acre parcel acquired in 2016, making it the most recent addition to South Cumberland State Park. The parcel, previously owned by a Brazilian timber company, was purchased with funds from a number of like-minded organizations including The Access Fund, Southeast Climbers’ Coalition and Friends of South Cumberland.

While the primary reason for this purchase was the outstanding rock climbing features, I was there for the waterfall hike. If you have seen me you know immediately that my body isn’t built for hanging onto the side of a cliff. Ropes or no ropes. Not happening.

The trailhead is just north of Jasper, Tennessee off U.S. Highway 41. When I arrived at 9 a.m. the gravel parking lot was less than half full. It was a Tuesday, so that probably helped keep the numbers low. You will find the start of the trail at the Denny Cove information sign at the end of the parking lot.

The first part of the trail is fairly level without roots and rocks. At 0.4 miles the trail splits. The overlook spur is off to the right and the waterfall trail to the left. I took the time to hit the overlook spur, and I suggest you do the same. It’s an out and back spur that adds a bit over 0.5 miles to the overall hike. The overlook into the valley was worth it and I imagine it would be fabulous during October when the leaves are changing. Just beyond the junction with the overlook spur there is a sign for Denny East and Denny West. I didn’t take either of these trails, but Denny West is 0.25 miles and seems to follow the base of the cliffs under the overlook, while Denny East is 0.85 miles and hugs the cliffs where the rock climbing happens. It runs parallel to the waterfall trail. The waterfall is 1 mile from this split, and you will want to continue straight ahead to the falls.

The next 0.5 miles of the trail is mostly easy walking with some spots where you’ll encounter patches of large rocks and some exposed roots. There are a few short spurs off to the right offering views into the valley which are worth the minimal detour off the trail. Soon you will pass the Buffet Wall sign with a spur trail off to the left. Take that if you have climbing gear and are ready to cling to the side of a cliff for a few hours. Me? Straight ahead!

There were several climbers on the wall that morning which surprised me a bit. It wasn’t cold by any means, but I was thinking about cold fingers gripping shear rock faces wasn’t a perfect match. The climbers are easily visible as you continue down the trail. I was fascinated by their efforts and couldn’t keep from turning to watch their progress. More than 150 world-class climbing routes have been identified on the bluffs at Denny Cove.

At about 0.75 miles in, the trail changed dramatically. I had noticed more rocks on the trail as I progressed but all of a sudden it was all rocks. Not the little pebbles either. In minutes you go from a fairly smooth path to an avenue where every step is on a boulder. Be very careful and mindful of foot placement in this area. I stepped on a large rock that looked stable only to find it wasn’t, causing me to stumble and fall at one point. If you have trekking poles I suggest you bring them. They will come in handy in this portion of the trail. You will find plenty of ankle breakers about 0.2 miles from the waterfall.

As you leave the largest part of the rock scrambling behind, you will suddenly hear the sounds of the rushing water. Within minutes you’ll crest a slight hill to find the Denny Cove waterfall directly in front of you. It is a wonderful waterfall with a drop of maybe 70 feet. On this day the volume of water crashing down was steady and wide, though I heard from another hiker on my way out that sometimes in the summer there is barely a trickle.

I was lucky to find I was the only one there when I arrived at the base of the falls. I sat peacefully admiring yet another delightful piece of nature for a few minutes while I enjoyed a snack and took a few pictures. It wasn’t long before I heard the voices of other hikers closing in on the end of the trail. When they arrived I slid back out the way that I came in and headed back to the truck so they too could enjoy the view in solitude. It always feels shorter when headed back on an out-and-back trail, and this was no different. I took the time to stop and admire the rock climbers a few times again on the way out. The total trek was just over 3.2 miles which included the overlook spur I had hit on the way in. I’d rate it as moderate because of the boulder field you have to scramble across as you get close to the falls. Just take your time and watch you step. The overlooks are great places to rest for a bit if you are feeling tired.

With another trail and waterfall marked off my list, I cranked the truck and headed out. As I exited the gravel road I turned north onto U.S. 41 and went a few miles up the road to Foster Falls. I’ll tell you about that one soon. Foster Falls is yet another delightful piece of nature that is worth visiting. 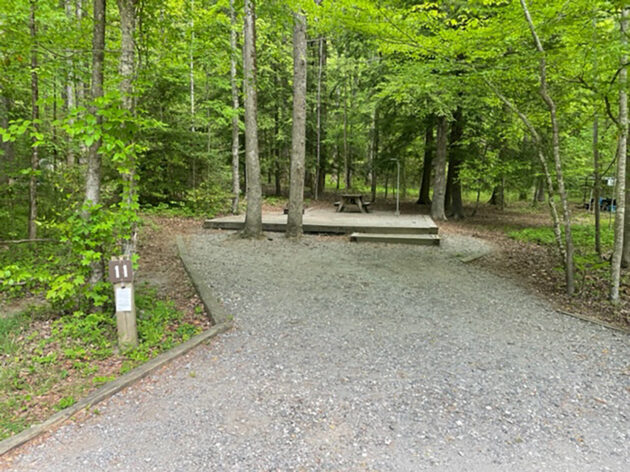