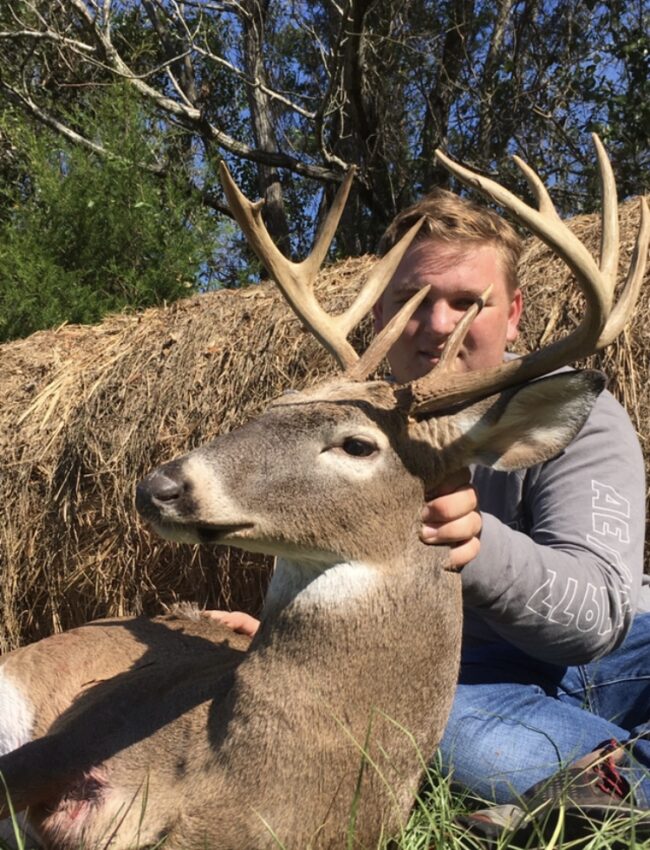 The stand was recently moved before the hurricane. A friend hunted there a week prior to the general gun season and witnessed many large bucks there. The corn had run out a few days before I hunted, and the feeder had been knocked over and moved by feral hogs. The night before I killed the buck, I put out more corn and the deer found the corn within 12 hours. I slipped into the stand silently very early in the morning to get there before the deer. They were at the feeder 100 yards away when I got there, but I did not spook them. At first light I noticed 6-8 does eating at the feeder 100 yards away. Twenty minutes later I saw the does spook. Not 100% sure why, I waited a minute. Almost instantaneously I saw a large-bodied deer walk to the feeder. When I put up my binoculars, I watched horns on his head and my heart started to pump. I continued to watch him for a minute to identify him, there were some bucks that I wanted to pass. Right after, another very nice buck filtered in. The first one that I was watching turned his head and I bugged out. I immediately had my rifle up with m heart pounding. Within seconds I was aiming at the vitals and pulling the trigger. After at least 5-10 deer scattered including my deer. All I found was hair white hair and no blood, so I backed out and called a tracker with a dog who was able to recover the deer within 20 minutes of arriving.
Return to List